The post-punk revival (also described as New Wave revival,[1] garage rock revival,[2] or new rock revolution[3]) was a development in alternative rock of the late 20th and early 21st centuries in which bands took inspiration from the original sounds and aesthetics of garage rock of the 1960s and post-punk and New Wave of the late 1970s.[1][2] Bands that broke through to the mainstream from local scenes across the world in the early 2000s included The Strokes, The White Stripes, The Hives and The Vines, who were followed to commercial success by many existing and new acts. By the end of the decade, most of the bands had broken up, moved on to other projects or were on hiatus, although some bands returned to recording and touring in the 2010s. 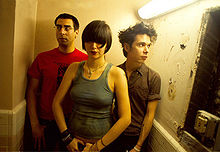 In the early 2000s, a new group of bands that played a stripped down and back-to-basics version of guitar rock emerged into the mainstream. They were variously characterised as part of a garage rock, New Wave or post-punk revival.[1][4][5][6] Because the bands came from across the globe, cited diverse influences (from traditional blues, through New Wave to grunge), and adopted differing styles of dress, their unity as a genre has been disputed.[7]

Garage rock was the name given to the raw form of rock and roll that was first popular in the United States and Canada from about 1963 to 1967. The two-disk Nuggets compilation produced in 1972 by future Patti Smith Group guitarist Lenny Kaye, popularised the genre and its sleeve notes helped coin the phrase "punk rock" to describe the phenomenon.[8] The bare musical structures and arrangements of 1960s garage rock would be a major influence on the punk rock of the mid-1970s.[9] There were attempts to revive garage rock and elements of punk in the 1980s and 1990s and by 2000 scenes had grown up as part of the alternative and indie music scenes in several countries.[10] The Detroit rock scene included The Von Bondies, Electric Six, The Dirtbombs and The Detroit Cobras[11] and that of New York Radio 4, Yeah Yeah Yeahs and The Rapture.[12] Elsewhere, the Oblivians from Memphis,[13] Billy Childish and The Buff Medways from Britain,[14] The (International) Noise Conspiracy from Sweden,[15] and The 5.6.7.8's from Japan,[16] enjoyed underground, regional or national success. 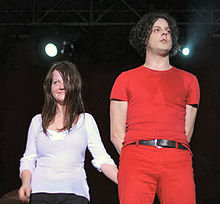 The White Stripes onstage in Barcelona in 2007

New Wave was a term adopted in the aftermath of punk rock to describe a generation of bands who generally pursued a more commercially successful punk-influenced sound. Major acts included Talking Heads, The Cars, The Go-Go's,[17] The Pretenders, Elvis Costello[18] and "skinny tie" bands like The Knack and Blondie.[19] The term "post-punk" was originally coined to describe groups of this era who took punk and experimented with more challenging musical structures, lyrical themes, and a self-consciously art-based image, while retaining punk's initial iconoclastic stance. Such bands included Devo, Joy Division, The Birthday Party, The Cure, Siouxsie and the Banshees, Public Image Ltd., Gang of Four and Echo & the Bunnymen.[20] Allmusic argues that rather than a revival, the history of post-punk was more of a continuum from the mid-'80s, with scattered bands that included Big Flame, World Domination Enterprises, and Minimal Compact extending the genre. In the mid-'90s notable bands in this vein included Six Finger Satellite, Braniac and Elastica.[1]

At the turn of the century, the term "post-punk" began to appear in the music press again, with a number of critics reviving the label to describe a new set of bands that shared some of the aesthetics of the original post-punk era. Music critic Simon Reynolds noted that bands like The Rapture and Franz Ferdinand were influenced from the more angular strain of post-punk, particularly bands such as Wire and Gang of Four.[21] Others identified this movement as another wave of garage rock revivalism, with the NME in 2003 identifying a "new garage rock revolution",[22] or simply a "new rock revolution".[3] According to Jim DeRogatis, The Strokes, the White Stripes and the Hives all had a sound "to some extent rooted in Nuggets-era garage rock".[5] These bands played a basic form of rock and roll that looked back to 1960s, but with diverse inflections. They shared an emphasis on energetic live performance and used aesthetics (in hair and clothes) closely aligned with their fans,[22] often drawing on nostalgic dress of the '50s and '60s,[7] with "skinny ties, white belts [and] shag haircuts".[3] There was an emphasis on "rock authenticity" that has been seen as a reaction to the commercialism of MTV-oriented nu metal, hip hop[22] and "bland" post-Britpop groups.[23] For Eric James Abbey, these were diverse bands that have appropriated, or been given, the label garage to gain a degree of credibility.[7]

The commercial breakthrough from these scenes was led by four bands: The Strokes, who emerged from the New York club scene with their début album Is This It (2001); The White Stripes, from Detroit, with their third album White Blood Cells (2001); The Hives from Sweden after their compilation album Your New Favourite Band (2001); and The Vines from Australia with Highly Evolved (2002).[24] Both The Strokes and the The White Stripes obtained their initial commercial success in the UK, before achieving recognition in the US and elsewhere.[25] They were christened by the media as the "The" bands, and dubbed "The saviours of rock 'n' roll",[26] prompting Rolling Stone magazine to declare on its September 2002 cover that "Rock is Back!".[27] The attention in the press in turn lead to accusations of hype[26] and some dismissed the scene as unoriginal, image-conscious and tuneless.[27] 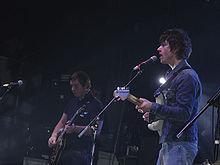 Arctic Monkeys on stage in 2006

In the wake of this attention existing acts like the Yeah Yeah Yeahs were able to sign to major record labels.[28] A second wave of bands that managed to gain international recognition as a result of the movement included Interpol, Black Rebel Motorcycle Club, The Killers, Kings of Leon,[29] The Catheters, Mooney Suzuki and The Go from the US.[5] From the UK were Franz Ferdinand, Bloc Party, Editors and The Libertines,[30] The Fratellis, Razorlight, Kaiser Chiefs and The Kooks.[31] Arctic Monkeys were the most prominent act to owe their initial commercial success to the use of Internet social networking,[32] with two number one singles and Whatever People Say I Am, That's What I'm Not (2006), which became the fastest-selling debut album in British chart history.[33] Also successful were Jet from Australia,[34] The Datsuns and The D4 from New Zealand,[35] and The Hellacopters, Backyard Babies and Soundtrack of Our Lives from Sweden.[5]

As a dominant commercial force the revival was relatively short lived and by 2005 the initial success of the movement was beginning to subside, leading commentators to discuss its decline as a phenomenon and argue that it had been overtaken by the more musically and emotionally complex music of indie rock bands like Arcade Fire and Death Cab For Cutie.[3] By the end of the decade many of the bands of the movement had broken up, were on hiatus or had moved into other musical areas and very few bands were making significant impact on the charts.[36][37] Bands that returned to recording and touring in the 2010s included Arctic Monkeys[38] and The Strokes.[39]