Crook County is a county located in the U.S. state of Oregon. In 2010, its population was 20,978. It is named after George Crook, a U.S. Army officer who served in the American Civil War and various Indian Wars. The seat of the county is Prineville. 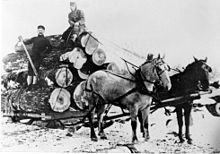 Logging in the Ochoco Mountains, circa 1900

Access into the region at first was difficult, which discouraged settlement. The first effort to develop routes into the area was in 1862 when a supply train with cattle crossed the Scott Trail. This was also the first group of non-natives to spend the winter in central Oregon. The discovery and development of the Santiam Pass in the 1860s improved access into the area.

Crook County was formed from the southern part of Wasco County on October 24, 1882, and established Prineville as the county seat. The voters confirmed the choice of Prineville, the only incorporated town in the county, in the 1884 general election.

Logging in the Ochoco Mountains and the timber mills that accompanied it contributed to the economic and population growth of the county. The first recorded mention of a sawmill was made by George Barnes, speaking about the Swartz sawmill on Mill Creek, circa 1867.[1][2]

Forest products, agriculture, livestock raising and recreation/tourism services constitute Crook County's total economy. Agriculture is supported by the development of irrigation districts, which permits the raising of hay, grain, mint, potatoes, and seed. Range and forest lands allow grazing for a sizable livestock industry. The Ochoco National Forest's stand of ponderosa pine is the main source of lumber. As the lumber industry suffers from restrictions on log cutting, tourism and recreation are helping to strengthen the economy. Thousands of hunters, fishers, boaters, sightseers and rockhounds are annual visitors to its streams, reservoirs and the Ochoco Mountains. The Prineville Chamber of Commerce provides access to over 1,000 acres (4.0 km2) of mining claims to rockhounds, who can dig for free agates, limb casts, jasper and thundereggs.

The oldest geological formation in Oregon is in the southeastern corner of Crook County, near its boundary with Grant County. This formation is an outcropping of Devonian limestone created from a larger reef when most of Oregon was covered by water. 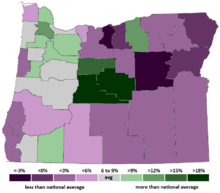 From 2000 to 2007, Crook County's population grew by 34.9%, more than three times the state average. It was the second fastest growing county in the state, after neighboring Deschutes County.