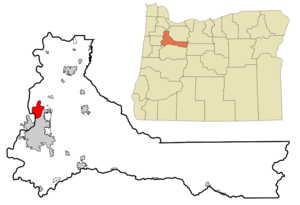 The original settlement was at Keizer Bottom, near the banks of the . The community was named after Thomas Dove Keizur, one of its first settlers. Somewhere in the translation of donation land claim records, his name was misspelled. [ [Book: The Keizer Story (Keizur) by Daisy Keizur Barrett & Ginger Powers ] [ [http://www.keizertimes.com/news/story.cfm?story_no=7653 Keizertimes.com ] ] This settlement suffered in the flood of 1861, and the inhabitants rebuilt their homes on higher ground. Further floods in 1943, 1945, 1946 and 1948 hampered the growth of the community, and it was not until s were built in the 1950s to regulate the flow of the Willamette that Keizer began to flourish.

Many times the City of Salem tried to annex the growing community adjacent to its city limits.Fact|date=May 2007 Beginning in 1964, a number of Keizer residents tried to convince the people of Keizer that it would be cheaper and better to form their own city. It was not until , when, with the support of the nearby of Clear Lake, residents voted to make Keizer a city.

There were 12,110 households out of which 35.6% had children under the age of 18 living with them, 55.8% were married couples living together, 11.2% had a female householder with no husband present, and 28.6% were non-families. 22.4% of all households were made up of individuals and 8.4% had someone living alone who was 65 years of age or older. The average household size was 2.64 and the average family size was 3.07.

Keizer hosts the , a team in the .

Keizer is part of the and has one high school, McNary.