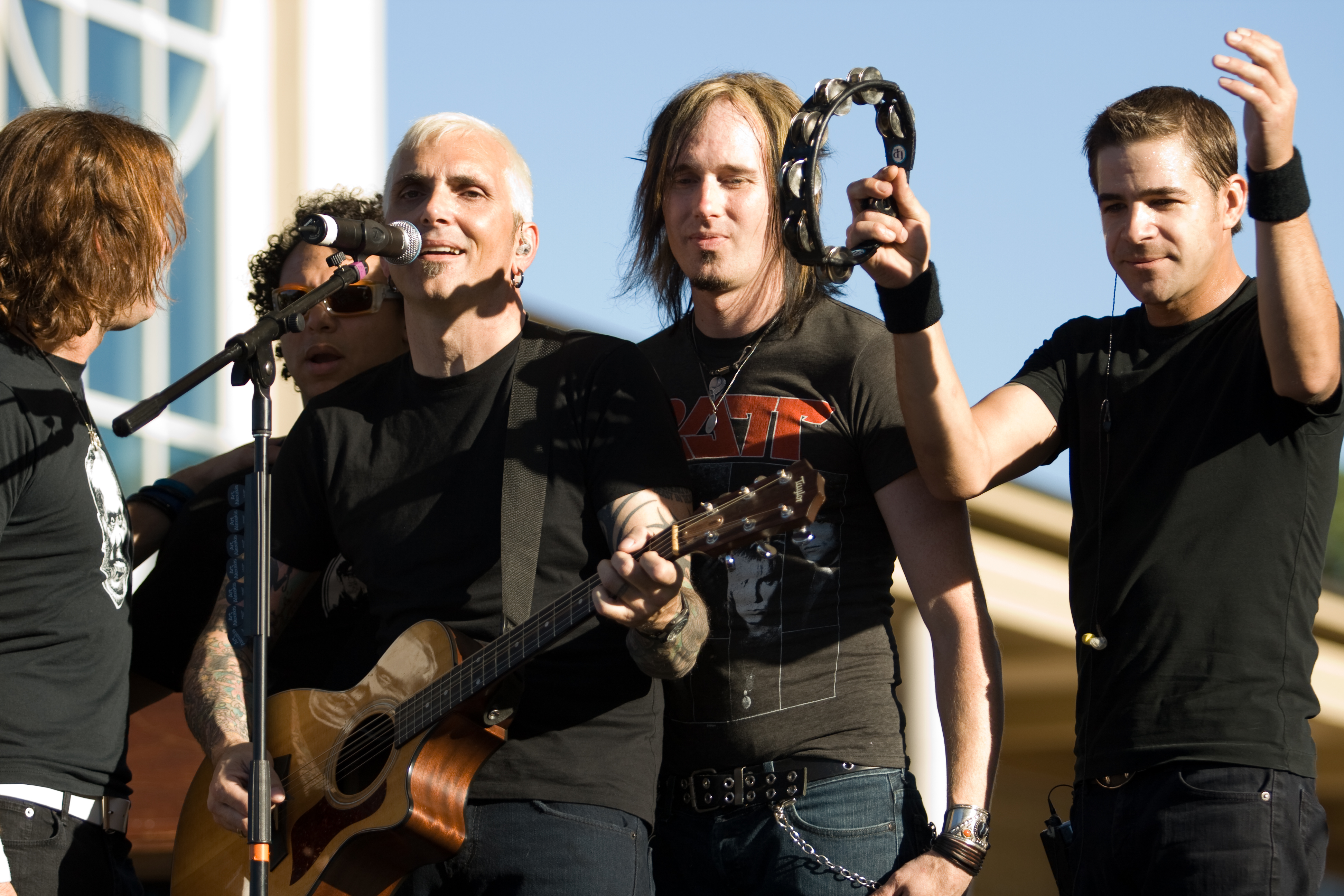 Art Alexakis suffered through a troubled youth, beginning with his father walking out when Alexakis was a child. Financial hardships pushed his family into the slums of Los Angeles, where Alexakis fell to the lure of heavy drug use. During his teenage years, Alexakis was shuttled around the country between various family members (including a brief period in Houston living with his father's new family), but the drug addiction persisted. Eventually, Alexakis suffered a near-fatal cocaine overdose, which finally pushed him to clean up.

In the late 1980s, Alexakis played in a short-lived rock band in Los Angeles called Shakin' Brave, where he began to hone his songwriting skills. Frustrated by the inattention of the L.A. music scene, Art relocated to , where he fell into the then-burgeoning scene.

Art founded a label called , which attempted to document the SF cowpunk scene. He began recording material of his own for a solo album, but it eventually evolved into a group project called . Art Alexakis utilized the pseudonym "A.D. Nation" while writing/recording with Colorfinger. While involved with Colorfinger, Art wrote several songs which would later find success as Everclear songs, including "The Twistinside", "Heartspark Dollarsign", and "Why I Don't Believe in God".

In a single month in 1992, Shindig failed (when its distributor went bankrupt), Colorfinger broke up, and Art learned that his girlfriend was pregnant. Seeking a change of location, Art and his girlfriend moved to her hometown, Portland, Oregon. There, he placed an ad in local music weekly "The Rocket", which earned two responses: bass player Craig Montoya and drummer Scott Cuthbert.The new band, Everclear, began recording in a friend's basement, essentially bartering for recording time with musical gear and whatever limited funds they could scrounge up. The sessions culminated in two releases: the "" EP and the band's first full-length release "", both released by Portland's Tim/Kerr Records in 1993. Frustrated by Tim/Kerr's limited resources, Alexakis hired independent promoters to help push the album. Eventually, it became obvious that Everclear needed to find a bigger player to help them reach their audience.

The band spent much of 1994 seeking out a major label deal. After a modest bidding war, they were signed to by Gary Gersh, who was responsible for signing Nirvana, , and to . Just before their signing, Everclear parted ways with drummer Cuthbert, citing personality conflicts, and brought in former Jollymon drummer Greg Eklund. In May 1995, the band released their first album for the label, "".

Initially, the album didn't find an audience. The albums first single, "Heroin Girl", received some modest airplay via 's , but was generally missed by the mainstream. However, near the end of 1995, the second single "Santa Monica" found a strong audience via the burgeoning alternative radio format, which eventually carried over to mainstream success. The album subsequently was certified platinum. However, two ensuing singles, "Heartspark Dollarsign" and "You Make Me Feel Like a Whore", failed to find a wide audience, and the band ended 1996 fast at work on their third album.

As "Sparkle and Fade" reached its audience, Everclear had to endure consistent comparisons to Nirvana, particularly given the album's subject matter and drug references. Following a show with the at the end of 1995, told that he genuinely didn't think that Everclear sounded like Nirvana, noting that Bush sounded more like Nirvana than any other band.

The Australian tour, however, was an unexpected disaster. At a show in , someone threw a shoe at Alexakis, knocking loose a few of his teeth. Two nights later in Melbourne, someone threw a lit explosive on stage, which exploded and burned a stagehand. Tensions erupted backstage, with touring guitarist Steve Birch refusing to continue, and Montoya getting into a heated argument with Alexakis. In interviews for 's , the band related that they nearly broke up that night. The band decided to cancel the remainder of their tour following a final show on the Gold Coast, during which Alexakis was hit with a shoe (while the crowd was singing him "Happy Birthday") and Montoya's acoustic bass guitar was stolen. Montoya declined to join the band for the ensuing tour of the , with then-bass-tech David LoPrinzi filling in. To date, Everclear has not returned to Australia.

Following an extensive tour of the with and Fastball, the band released "Afterglow"'s third single, "Father of Mine". The song catapulted the album and the band to mainstream success.

"Afterglow" provided the band their only Grammy nomination to date, a Best Rock Instrumental nod in 1998 for "El Distorto de Melodica". Later that year, the band won Billboard's Modern Rock Band of the Year Award. Though "Afterglow" never charted higher than #33 on the Billboard album chart, the album reached double-platinum status at the end of the year.

Following the success of "So Much for the Afterglow", Alexakis decided to step back from the Everclear sound and record a solo album of more pop-influenced songs, and brought in Everclear touring musicians David LoPrinzi, Brian Lehfeldt, and James Beaton to perform on the recordings. Unhappy with the results of the initial sessions, Alexakis decided to bring in Montoya and Eklund and transform the effort into an Everclear album. The results were released as "" in July 2000. The album yielded the band's most successful single, "Wonderful", and eventually reached platinum status. The song "Wonderful" was also noteably used as the graduation song for the Columbine High School class of 1999, who had suffered their on tragedy on April 20th 1999 when two fellow students opened fire, killing eleven students and one teacher, plus ending their own lives.

Rather than tour for the release, the band arranged with their label to release a second album in 2000. Alexakis believed he had enough of a catalog of unreleased songs at the ready, and was eager to show the opposing sides of Everclear's sound. However, delays in the mixing process of "Learning How to Smile" had pushed its initial April release to July, limiting the amount of recording time for the follow-up in order to meet Capitol's demands of an end-of-the-year release.

Proclaimed as a "return to rock", ' was released just four months after "Vol. 1" in November of 2000. Unfortunately, the promotional push for "Vol. 2" while still in the throes of supporting "Vol 1" confused much of the music-buying public. "Learning How to Smiles second single "AM Radio" was released barely weeks before the release of "Vol. 2", leaving some stores to mistakenly label the song as the first single from "Vol. 2". The confusion was amplified by the band's decision to accept an opening slot for Matchbox 20 in the months after the release of "Vol. 2", a somewhat awkward billing for a band who was trying to support a hard rock album.

By the late spring of 2001, both albums had stalled. Capitol attempted a final push by re-releasing "Learning How to Smile" with "Out of My Depth" and "Rock Star" from "Good Time for a Bad Attitude" as bonus tracks. A cover of 's "" received some modest airplay as a result, but couldn't help revive the momentum. A tour of the for what would have been the band's first extensive tour of the country since 1998 was cancelled shortly before its start.

That summer, the band decided to license "Rock Star" to the movie of the same name. Fortune seemed to finally be turning around for the band, as the promotional push behind the movie helped the song find an audience at radio and . However, the push ended following the September 11, 2001 attacks.

The band regrouped a year later to record their sixth album, "", released in March 2003. Both band and label were excited about the effort prior to its release. Everything looked positive until Alexakis and Capitol came to odds over the album's first single. Capitol was thrilled about one of the last songs added to the album, a somewhat 9/11-influenced "The New York Times". Alexakis, however, had previewed a tongue-in-cheek ode to Republican suburbanite housewives, "Volvo Driving Soccer Mom", during a solo tour in 2002, and had received a fair amount of media attention. Capitol eventually relented to Alexakis' demands and released the song and video, but didn't put much effort into the song and album's promotion. "The New York Times" was released shortly thereafter as the second single with even less support from the label, and the album stalled after selling 100,000 copies.

At the end of the tour support for "Slow Motion Daydream" in August 2003, Montoya and Eklund decided that it was time to move on, and departed the band to pursue other interests. The following summer, Everclear ended its relationship with . Capitol compiled a Greatest Hits album reflecting the band's tenure at the label, titled "", which was released in October 2004.

After leaving Everclear, Craig Montoya formed a new band [http://www.tripolarmusic.com/ Tri-Polar] with members Scotty Heard and Brian Lehfeldt. After completing the recording of their debut album, Scotty Heard left the band for personal reasons. Heard was then replaced by former Red Sector guitarist Kevin Hahn. The band's self-titled debut album was released on , . The band spent several months on hiatus in late 2005 and early 2006, but recently reformed, including former guitarist Scotty Heard. Montoya has decided to pass bass guitar duties and focus on singing. The band has dates set for the West Coast starting in June 2006.

During the last couple of years in Everclear, Greg Eklund quietly recorded demos of his own material in his garage. In 2004, Eklund formed with his brother Mark and vocalist Olivia Stone. After self-releasing an EP of their first six demos, the band entered the studio in late 2005 to record their debut album. The completed album, "Best Stop Pop", was released on September 26, 2006, on [http://www.stolentransmission.com Stolen Transmission] , an imprint of .

After a solo tour in the fall of 2003, Alexakis decided to continue with Everclear, organizing a new band that made its debut in March 2004. The new lineup consisted of bassist Sam Hudson, guitarist Dave "Davey" French, and drummer Eric Bretl. In the summer of 2004, the band added keyboardist Josh Crawley, and swapped Bretl for former Everclear drum tech Brett Snyder. The new lineup released its first recording, a cover of 's "", that summer. Alexakis, an Oregon delegate, performed the song (as well as "Everything to Everyone") with an acoustic guitar during a CNN interview at the 2004 Democratic National Convention. A self-released EP of performances recorded for called "Closure" was given out at shows in the fall of 2004.

Free of a major label, Alexakis spent the ensuing year and a half slowly recording material for a new Everclear release. He admitted that the time after the breakup of the original lineup served as a "wake up call", during which he suffered his third divorce and filed for bankruptcy. The new band is currently signed to . Everclear released their latest album on , , titled "". Two songs were released from the album, "Hater" and "Glorious".

In January 2008, Alexakis posted on the band's myspace that they were working on a cover album, and a new album, which should be released in 2008. In addition, two unreleased songs from the Drama Club sessions, "Downtime" and "Here Comes the Darkness", were posted.

, a collection of cover songs was released April 15, 2008 by Capitol Records. It contains a mix of newly recorded, previously released, live, and remixed older covers. To celebrate the release, Art and the band hosted a live video chat. They confirmed they will be touring in the summer of 2008 including a possible UK tour in autumn. They also plan to release a series of singles for download online in the summer. The first single will be a new song entitled "Jesus Was a Democrat" with a b-side likely to be "Here Comes the Darkness".

In August of 2008 former Godsmack and Fuel drummer Tommy Stewart replaced Brett Snyder on drums. While guest hosting on Sirius radio station 24, Lithium, Art Alexakis debut on August 28th, Alexakis debuted "Jesus Was a Democrat". The song can now be downloaded for free off the band's official website, or MySpace with free artwork, and lyrics.

The song is in an episode of