The Flag of South Africa 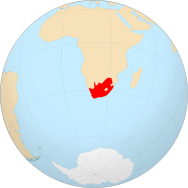 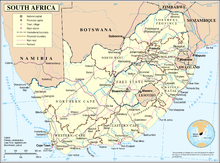 An enlargeable map of the Republic of South Africa

The Republic of South Africa is a sovereign country located at the southern tip of Africa.[1] South Africa's coast stretches 2,798 kilometres[2] and borders both the Atlantic and Indian oceans.[3] To the north of South Africa lie Namibia, Botswana, Zimbabwe, Mozambique and Swaziland, while the Kingdom of Lesotho is an independent enclave surrounded by South African territory.[4]

Modern human beings have inhabited South Africa for more than 100,000 years.[5] However, with the discovery of the Cape Sea Route, the Dutch East India Company founded a refreshment station at what would become Cape Town in 1652.[6] Cape Town became a British colony in 1806. European settlement expanded during the 1820s as the Boers (original Dutch settlers) and the British 1820 Settlers claimed land in the north and east of the country. Conflicts arose between the original inhabitants of the land, the Khoi, Xhosa and Zulu, and the new European settlers. However, the discovery of diamonds and later gold triggered the conflict known as the Anglo-Boer War as the Boers and the British fought for the control of South Africa's mineral wealth. Although the Boers were defeated, limited independence was given to South Africa in 1910 as a British dominion. Anti-British policies focused on ultimate independence which was achieved in 1961 when South Africa was declared a republic. The leading National Party legislated segregation known as apartheid despite opposition both in and outside of the country. In 1990, upon his release from prison, Nelson Mandela as well as the then president F.W. de Klerk began to dismantle this legislation, and in 1994 the first democratic election was held in South Africa. This election brought Nelson Mandela and the current ruling party, the African National Congress to power.

South Africa is known for its diversity, and eleven official languages are recognised in its constitution.[3] English is the most commonly spoken language in official and commercial public life, however it is only the fifth most spoken home language.[3] South Africa is ethnically diverse, with the largest Caucasian, Indian, and racially mixed communities in Africa. Although 79.5% of South Africa's population is Black, this category is neither culturally nor linguistically homogenous, as they speak a number of different Bantu languages, nine of which have official status.[3] In 2006, South Africa's population was estimated at 47.4 million people.[3]

The following outline is provided as an overview of and topical guide to South Africa: 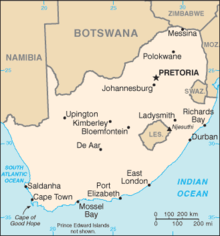 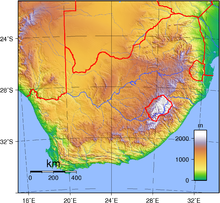 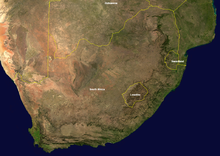 Government and politics of South Africa

Branches of the government of South Africa

Executive branch of the government of South Africa

Legislative branch of the government of South Africa

Judicial branch of the government of South Africa

The Republic of South Africa is a member of:[1]

Law and order in South Africa

Economy and infrastructure of South Africa