Cricket is the third most popular sport in South Africa, and is popular among English-speaking as well as Afrikaans-speaking whites. South Africa is a leading cricket-playing nation in the world, and is one of 10 countries sanctioned by the International Cricket Council (ICC) to play Test Cricket.

Cricket in South Africa was established by the British, and the first tour by a side from England took place in 1888-89. Here South Africa played its first Test match (against touring England at Port Elizabeth), becoming the third test nation.

In 1970, the ICC voted to suspend South Africa from international Cricket indefinitely because of its government's policy of apartheid, an overtly racist policy, which led them to play only against the white nations (England, Australia, New Zealand), and field only white players. This decision excluded players such as Graeme Pollock from partaking in international Test Cricket. It would also cause the emigration of future stars like Allan Lamb and Robin Smith, who both played for England, and Kepler Wessels, who initially played for Australia, before returning to South Africa.

The ICC reinstated South Africa as a Test nation in 1991 after the deconstruction of apartheid, and the team played its first sanctioned match since 1970 (and its first ever One-Day International) against India in Calcutta on 10 November 1991.

Cricket was traditionally popular among English-speaking whites, and the Asian / Muslim community, though the latter were not able to compete in top level South African cricket in the Apartheid era. Since the end of the Apartheid era a higher proportion of white players have come from Afrikaans-speaking backgrounds, and attempts have been made to increase the number of non-white players, in part through a quota system. Its popularity has grown markedly amongst other groups, though cricket remains the favourite sport for Asian / Indian / Muslim South Africans as well as people of English descent. This has other reasons, since cricket is a very expensive and typically middle class game, it does not appeal to blacks and coloureds like Association football or rugby union does.

Today, cricket is the third most popular sport in South Africa, and is the only sport in the country to feature in the top 2 sports of all race groups. This has had both successes — Herschelle Gibbs, a Cape Coloured, is one of the sport's most dominating batsmen and the black bowler Makhaya Ntini reached number 2 in the ICC Player Rankings in 2006 — and unintended side effects. Kevin Pietersen, who is white, left the country claiming that he was put at a disadvantage by the quota system, and within a few years became one of the world's top batsmen - as a member of the England cricket team.

The quote system has since been repealed.

Formerly known as the United Cricket Board of South Africa, Cricket South Africa is the governing body for professional and amateur cricket in South Africa.

South Africa is a full member of the International Cricket Council and African Cricket Association with Test and One Day International status. 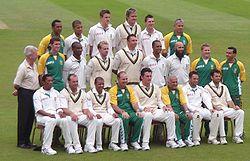 The South African team at The Oval in August 2008.

South Africa is a full member of the International Cricket Council with Test and One Day International status. Through the mid 90's to the present, the Proteas have been labelled as the archetypal chokers in international cricket, especially due to their not winning a Cricket World Cup even after being one of the top favourites and their general inability to win the big matches on the big occasions.