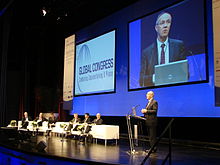 The World Intellectual Property Organization (WIPO) is one of the 16 specialized agencies of the United Nations. WIPO was created in 1967 "to encourage creative activity, to promote the protection of intellectual property throughout the world".[1]

WIPO currently has 184 member states,[2] administers 24 international treaties,[3] and is headquartered in Geneva, Switzerland. The current Director-General of WIPO is Francis Gurry, who took office on October 1, 2008.[4] 183 of the UN Members as well as the Holy See are Members of WIPO. Non-members are the states of Cook Islands, Kiribati, Marshall Islands, Federated States of Micronesia, Nauru, Niue, Palau, Solomon Islands, Timor-Leste, Tuvalu, Vanuatu and the states with limited recognition. Palestine has observer status.[5]

WIPO was formally created by the Convention Establishing the World Intellectual Property Organization, which entered into force on April 26, 1970. Under Article 3 of this Convention, WIPO seeks to "promote the protection of intellectual property throughout the world." WIPO became a specialized agency of the UN in 1974. The Agreement between the United Nations and the World Intellectual Property Organization[6] notes in Article 1 that WIPO is responsible

The Agreement marked a transition for WIPO from the mandate it inherited in 1967 from BIRPI, to promote the protection of intellectual property, to one that involved the more complex task of promoting technology transfer and economic development.[7]

Unlike other branches of the United Nations, WIPO has significant financial resources independent of the contributions from its Member States. In 2006, over 90% of its income of just over CHF 250 million[8] was expected to be generated from the collection of fees by the International Bureau (IB) under the intellectual property application and registration systems which it administers (the Patent Cooperation Treaty, the Madrid system for trade marks and the Hague system for industrial designs).

As with all United Nations multi-government forums, WIPO is not an elected body. WIPO usually attempts to reach decisions by consensus, but in any vote, each Member State is entitled to one vote, regardless of population or contribution to the funding. This factor has led to significant consequences over certain issues,[vague] due to the North-South divide in the politics of intellectual property. During the 1960s and 1970s, developing nations were able to block expansions to intellectual property treaties, such as universal pharmaceutical patents which might have occurred through WIPO.[vague]

In the 1980s, this led to the United States and other developed countries "forum shifting" intellectual property standard-setting out of WIPO and into the General Agreement on Tariffs and Trade, which later evolved into the World Trade Organization, where the North had greater control of the agenda. This strategy eventually resulted in the enactment of Agreement on Trade-Related Aspects of Intellectual Property Rights (TRIPS).[citation needed]

In October 2004, WIPO agreed to adopt a proposal offered by Argentina and Brazil, the "Proposal for the Establishment of a Development Agenda for WIPO" - from the Geneva Declaration on the Future of the World Intellectual Property Organization.[9] This proposal was well supported by developing countries. A number of civil society bodies have been working on a draft Access to Knowledge (A2K)[10] Treaty which they would like to see introduced.

The Washington Post reported in 2003 that Lois Boland (USPTO Director of International Relations) said "that open-source software runs counter to the mission of WIPO, which is to promote intellectual-property rights." Also saying, "To hold a meeting which has as its purpose to disclaim or waive such rights seems to us to be contrary to the goals of WIPO."[11]

WIPO has established WIPOnet, a global information network. The project seeks to link over 300 intellectual property offices (IP offices) in all WIPO Member States. In addition to providing a means of secure communication among all connected parties, WIPOnet is the foundation for WIPO's intellectual property services.[12]