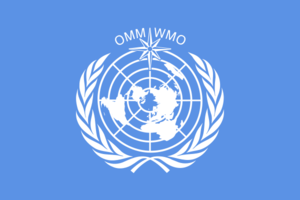 image size = 200px
caption = WMO flag
type = UN agency
acronyms = WMO OMM
head = flagicon|RUS Alexander Bedritsky
status = Active
established =
website = [http://www.wmo.int/ www.wmo.int]
headquarters = flagicon|CHE ,
parent =
subsidiaries =
commons =
footnotes = The World Meteorological Organization (WMO) is an with a membership of 188 Member States and Territories. It originated from the (IMO), which was founded in . Established in , WMO became the specialised agency of the for ( and ), operational and related geophysical sciences. It has its headquarters in , . The current president is and the current Secretary-General is Michel Jarraud.

In June 1976, in response to press reports predicting an event similar to the , the World Meteorological Organization issued a warning that a very significant warming of global climate was probable.Fact|date=September 2008

The World Meteorological Organization (WMO) is a specialized agency of the United Nations. It is the UN system's authoritative voice on the state and behaviour of the Earth's atmosphere, its interaction with the oceans, the climate it produces and the resulting distribution of water resources.

WMO has a membership of 188 Member States and Territories(since 24 January 2007). It originated from the International Meteorological Organization (IMO), which was founded in 1873. Established in 1950, WMO became the specialized agency of the United Nations in 1951 for meteorology (weather and climate), operational hydrology and related geophysical sciences.

Since its establishment, WMO has played a unique and powerful role in contributing to the safety and welfare of humanity. Under WMO leadership and within the framework of [http://www.wmo.int/pages/summary/progs_summary_en.html WMO programmes] , [http://www.wmo.int/pages/members/members_en.html National Meteorological and Hydrological Services] contribute substantially to the protection of life and property against natural disasters, to safeguarding the environment and to enhancing the economic and social well-being of all sectors of society in areas such as food security, water resources and transport.

WMO promotes cooperation in the establishment of networks for making meteorological, climatological, hydrological and geophysical observations, as well as the exchange, processing and standardization of related data, and assists technology transfer, training and research. It also fosters collaboration between the National Meteorological and Hydrological Services of its Members and furthers the application of meteorology to public weather services, agriculture, aviation, shipping, the environment, water issues and the mitigation of the impacts of natural disasters. WMO facilitates the free and unrestricted exchange of data and information, products and services in real- or near-real time on matters relating to safety and security of society, economic welfare and the protection of the environment. It contributes to policy formulation in these areas at national and international levels.

In the specific case of weather-, climate and water-related hazards, which account for nearly 90% of all natural disasters, WMO's programmes provide vital information for the advance warnings that save lives and reduce damage to property and the environment. WMO also contributes to reducing the impacts of human-induced disasters, such as those associated with chemical and nuclear accidents, forest fire and volcanic ash. Studies have shown that, apart from the incalculable benefit to human well-being, every dollar invested in meteorological and hydrological services produces an economic return many times greater, often ten times or more.

WMO plays a leading role in international efforts to monitor and protect the environment through its Programmes. In collaboration with other UN agencies and the National Meteorological and Hydrological Services, WMO supports the implementation of a number of [http://www.wmo.int/pages/about/Environmentalconventions_en.html environmental conventions] and is instrumental in providing advice and assessments to governments on related matters. These activities contribute towards ensuring the sustainable development and well-being of nations.

The WMO helped created the (IPCC). It is also directly responsible for the creation of the (GAW).

In keeping with its mandate to promote the standardization of meteorological observations, the WMO maintains numerous code forms for the representation and exchange of meteorological, oceanographical, and hydrological data. The traditional code forms, such as SYNO and TEMP, are character-based and their coding is position-based. Newer WMO code forms are designed for portability, extensibility and universality. These are , CREX, and, for gridded geo-positioned data, .

WMO conference on climate prediction and information for decision-making

World Climate Conference-3 (WCC-3) will be held from 31 August to 4 September 2009 in Geneva, Switzerland, under the auspices of the World Meteorological Organization (WMO). For the first time, a conference will establish an international framework to guide the development of climate services and integrate climate prediction and information in decision-making, in relation to the needs of society.