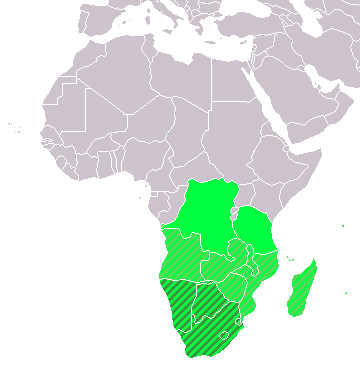 right|thumb|350px
legend|#00ff00| (SADC)] Southern Africa is the ernmost of the n , variably defined by or . Within the region are numerous territories – including the Republic of South Africa, a successor to the .

The and , though more commonly reckoned in Central and Eastern Africa respectively, are occasionally included in Southern Africa. "Apropos", the (SADC) was established in 1980 to facilitate co-operation in the region, which includes all of the above except Comoros (totalling 15 members).

The (SACU), created in 1969, comprises the five countries in the UN subregion of Southern Africa.

The term "Southern Africa" was also used to refer to South Africa and the "independent" s that were re-incorporated into South Africa following the end of in . Fact|date=February 2007

Another geographic delineation for the region is the portion of Africa south of the Cunene and rivers – that is, South Africa, Lesotho, Swaziland, Namibia, Botswana, Zimbabwe and the southern half of Mozambique. This definition is most commonly used in South Africa. Fact|date=February 2007

Some sources consider all of the countries south of the equator as being part of Southern Africa. [http://www.southernafricadirect.com]

The terrain of Southern Africa is varied, ranging from forest and grasslands to deserts. The region has both low-lying coastal areas, and mountains.

In terms of natural resources, the region has the world's largest resources of and the platinum group elements, , , and , as well as , , , and .

The region is distinct from the rest of Africa, with some of its main s including platinum, diamonds, gold, and uranium, but it is similar in that it shares some of the problems of the rest of the continent. While has left its mark on the development over the course of history, today , corruption, and / are some of the biggest factors impeding economic growth. The pursuit of economic and political stability is an important part of the region's goals, as demonstrated by the SADC.

The region has a wide diversity of ecoregions including , , , and s. Even though considerable disturbance has occurred in some regions from habitat loss due to human , and there remain significant numbers of various species, including , , , , , , and .

Southern Africa is home to many cultures and people. It was once populated by San, and in widely-dispersed concentrations. Due to the which edged the previous peoples to the more remote areas of the region, the majority of ethnic groups in this region, including the , , , , , Sotho, and , , , and , speak languages which share common Bantu language traits. The process of colonization and settling resulted in a significant population of European (, s, , etc.) and Indian descent (, Koreans, Tamils, etc.) in many southern African countries.