The demographics of South Africa encompasses about 50 million people of diverse origins, cultures, languages, and religions. The last census was held in 2001 and the next will be in 2011.

Even though the population of South Africa has increased in the past decade[3][4] (primarily due to immigration), the country had an annual population growth rate of −0.051% in 2010 (CIA est.), where the birth rate is higher than the death rate but there is a net emigration rate.[5][6] South Africa is home to an estimated 5 million illegal immigrants, including some 3 million Zimbabweans.[7][8][9] A series of anti-immigrant riots occurred in South Africa beginning on 11 May 2008.[10][11] 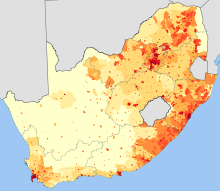 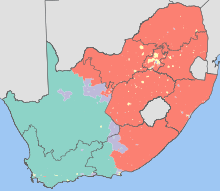 Statistics South Africa provided five racial categories by which people could classify themselves, the last of which, "unspecified/other" drew negligible responses, and these results were omitted.[3] The 2010 midyear estimated figures for the other categories were Black African at 79.4%, White at 9.2%, Coloured at 8.8%, and Indian or Asian at 2.6%.[12] The first census in South Africa in 1911 showed that whites made up 22% of the population; it declined to 16% in 1980.[13]

By far the major part of the population classified itself as African or black, but it is not culturally or linguistically homogeneous. Major ethnic groups include the Zulu, Xhosa, Basotho (South Sotho), Bapedi (North Sotho), Venda, Tswana, Tsonga, Swazi and Ndebele, all of which speak Bantu languages.

The white population is not ethnically homogeneous and descends from many ethnic groups: Dutch, Flemish, British, French Huguenot, Portuguese, German, Irish, Greek, Polish, and Italian. Culturally and linguistically, they are divided into the Afrikaners, who speak Afrikaans, and English-speaking groups, many of whom are descended from British and Irish immigrants (see Anglo-African). Many small communities that have immigrated over the last century retain the use of other languages. There is also a substantial (though decreased) Jewish population, the majority of whom came from Lithuania at the turn of the 20th century; though others came then and later from Great Britain, the former Soviet Union and Israel[citation needed]. The white population has until recently been on the decrease due to a low birth rate and emigration; as a factor in their decision to emigrate, many cite the high crime rate and the affirmative action policies of the government.[14][15] Since 1994, approximately 440,000 white South Africans have permanently emigrated.[12]

Despite high emigration levels, a high level of non-South African white immigrants have settled in the country, in particular from countries such as Britain and Zimbabwe. For example, by 2005, an estimated 212,000 British citizens were residing in South Africa. Since 2003, the numbers of British migrants coming to South Africa has risen by 50%. An estimated 20,000 British migrants moved to South Africa in 2007. There have also been a significant number of white Zimbabwean arrivals, fleeing their home country in light of the economic and political problems currently facing the country. As well as recent arrivals, a significant number of white Zimbabweans emigrated to South Africa in the wake of independence in Zimbabwe in 1980. Some of the more nostalgic members of the community are known in popular culture as "Whenwes", because of their nostalgia for their lives in Rhodesia "when we were in Rhodesia".[16]

There have been other white immigration waves to South Africa in recent decades. In the 1970s, many Portuguese residents of African colonies such as Angola and Mozambique, came to live in South Africa after the independence of those nations. In addition, the apartheid government encouraged Central European immigration in the 1980s and early 1990s, particularly from Poland and Hungary. 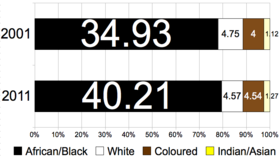 The term "coloured" is still used for the people of mixed race descended from slaves brought in from East and Central Africa, the indigenous Khoisan who lived in the Cape at the time, Bantus, Whites (mostly the Dutch/Afrikaner and British settlers) as well as an admixture of Javanese, Malay, Indian, Malagasy and Asian blood. The majority speak Afrikaans. Khoisan is a term used to describe two separate groups, physically similar: light-skinned and small in stature. The Khoikhoi, who were called Hottentots by the Europeans, were pastoralists and extensively integrated into the colonial economy, many converting early to Christianity; the San, called Bushmen by the Europeans, were hunter-gatherers. Within the Coloured community, more recent immigrants will also be found: Coloureds from the former Rhodesia (now Zimbabwe); Namibia and immigrants of mixed descent from India(Anglo-Indians) who were welcomed to the Cape when India and Burma received their Independence.

The major part of the South African Asian population is Indian in origin (see Indian South Africans); many of them descended from indentured workers brought in the nineteenth century to work on the sugar plantations of the eastern coastal area then known as Natal. Serious riots in Durban between Indians and Zulus erupted in 1949.[17] There is also a significant group of Chinese South Africans (approximately 100,000 individuals) and Vietnamese South Africans (approximately 50,000 individuals). In 2008, the Pretoria High Court has ruled that Chinese South Africans who arrived before 1994 are to be reclassified as Coloureds. As a result of this ruling, about 12,000–15,000[18] ethnically Chinese citizens who arrived before 1994, numbering 3%–5% of the total Chinese population in the country, will be able to benefit from government BEE policies.[19]

African Indigenous Churches made up the largest of the Christian groups. Some believe that many people claiming no affiliation with any organised religion adhered to traditional indigenous religions. Many people have syncretic religious practices combining Christian and indigenous influences.[22]

Muslims are largely found among the Coloured and Indian ethnic groups. They have been joined by black or white South African converts as well as immigrants from other parts of Africa.[23] South African Muslims claim that their faith is the fastest-growing religion of conversion in the country, with the number of black Muslims growing sixfold, from 12 000 in 1991 to 74 700 in 2004[23][24]

The Hindu population has its roots in the British colonial period, but later waves of immigration from India have also contributed to it. Most Hindus are ethnically South Asian but there are many who come from mixed racial stock. Some are converts due to the efforts of Hindu missionaries such as ISKCON.

Other minority religions in South Africa are Sikhism, Jainism and Bahá'í Faith.[20]

South Africa has eleven official languages:[25] Afrikaans, English, Ndebele, Northern Sotho, Sotho, Swazi, Tswana, Tsonga, Venda, Xhosa and Zulu. In this regard it is third only to Bolivia and India in number. While all the languages are formally equal, some languages are spoken more than others. According to the 2001 National Census, the three most spoken first home languages are Zulu (23.8%), Xhosa (17.6%) and Afrikaans (13.3%).[3] Despite the fact that English is recognised as the language of commerce and science, it was spoken by only 8.2% of South Africans at home in 2001, an even lower percentage than in 1996 (8.6%).[3]

The country also recognises several unofficial languages, including Fanagalo, Khoe, Lobedu, Nama, Northern Ndebele, Phuthi, San and South African Sign Language.[26] These unofficial languages may be used in certain official uses in limited areas where it has been determined that these languages are prevalent. Nevertheless, their populations are not such that they require nationwide recognition.

Many of the "unofficial languages" of the San and Khoikhoi people contain regional dialects stretching northwards into Namibia and Botswana, and elsewhere. These people, who are a physically distinct population from other Africans, have their own cultural identity based on their hunter-gatherer societies. They have been marginalised to a great extent, and many of their languages are in danger of becoming extinct.

South Africa hosts a sizeable refugee and asylum seeker population. According to the World Refugee Survey 2008, published by the U.S. Committee for Refugees and Immigrants, this population numbered approximately 144,700 in 2007.[27] Groups of refugees and asylum seekers numbering over 10,000 included people from Zimbabwe (48,400), The Democratic Republic of the Congo (24,800), and Somalia (12,900).[27] These populations mainly lived in Johannesburg, Pretoria, Durban, Cape Town, and Port Elizabeth.[27] Many refugees have now also started to work and live in rural areas in provinces such as Mpumalanga and KwaZulu-Natal.

Statistics SA assumes in some of their calculations that there are less than 2 million immigrants in South Africa.[28] Other institutions, like the police and Médecins Sans Frontières place estimate the figure at 4 million.[29][30][31][32][33]