Indian Ocean
This article is about the water body. For the Indian fusion music band, see Indian Ocean (band).

The Indian Ocean, not including the Antarctic region.

The Indian Ocean is the third largest of the world's oceanic divisions, covering approximately 20% of the water on the Earth's surface.[1] It is bounded on the north by the Indian Subcontinent and Arabian Peninsula (or, more generally, by southern and western Asia); on the west by eastern Africa; on the east by Indochina, the Sunda Islands, and Australia; and on the south by the Southern Ocean (or, depending on definition, by Antarctica). The ocean is named after the geographic location of India.[2][3][4][5]

As one component of the interconnected global ocean, the Indian Ocean is delineated from the Atlantic Ocean by the 20° east meridian running south from Cape Agulhas, and from the Pacific by the meridian of 146°55' east.[6] The northernmost extent of the Indian Ocean is approximately 30° north in the Persian Gulf. The Indian Ocean has asymmetric ocean circulation[citation needed]. This ocean is nearly 10,000 kilometres (6,200 mi) wide at the southern tips of Africa and Australia; its area is 73,556,000 square kilometres (28,350,000 sq mi),[7] including the Red Sea and the Persian Gulf.

The ocean's volume is estimated to be 292,131,000 cubic kilometres (70,086,000 mi3).[8] Small islands dot the continental rims. Island nations within the ocean are Madagascar, the world's fourth largest island; Reunion Island; Comoros; Seychelles; Maldives; Mauritius; and Sri Lanka. The archipelago of Indonesia borders the ocean on the east. 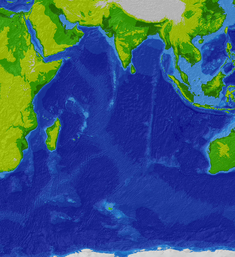 Bathymetric map of the Indian Ocean

The African, Indian, and Antarctic crustal plates converge in the Indian Ocean at the Rodrigues Triple Point. Their junctures are marked by branches of the mid-oceanic ridge forming an inverted Y, with the stem running south from the edge of the continental shelf near Mumbai, India. The eastern, western, and southern basins thus formed are subdivided into smaller basins by ridges.

The major choke points include Bab el Mandeb, Strait of Hormuz, the Lombok Strait, the Strait of Malacca and the Palk Strait. Seas include Gulf of Aden, Andaman Sea, Arabian Sea, Bay of Bengal, Great Australian Bight, Laccadive Sea, Gulf of Mannar, Mozambique Channel, Gulf of Oman, Persian Gulf, Red Sea, and other tributary water bodies. It is artificially connected to the Mediterranean Sea via the Suez Canal, accessible via the Red Sea.

The Indian Ocean is bounded by India's Lakshadweep Islands to the north.
Main article: Borders of the oceans#Indian Ocean

The climate north of the equator is affected by a monsoon climate. Strong north-east winds blow from October until April; from May until October south and west winds prevail. In the Arabian Sea the violent Monsoon brings rain to the Indian subcontinent. In the southern hemisphere the winds are generally milder, but summer storms near Mauritius can be severe. When the monsoon winds change, cyclones sometimes strike the shores of the Arabian Sea and the Bay of Bengal. The Indian Ocean is the warmest ocean in the world.

Among the few large rivers flowing into the Indian Ocean are the Zambezi, Shatt al-Arab, Indus, Ganges, Brahmaputra, Jubba and Irrawaddy River. Currents are mainly controlled by the monsoon. Two large circular currents, one in the northern hemisphere flowing clockwise and one south of the equator moving anticlockwise, constitute the dominant flow pattern. During the winter monsoon, however, currents in the north are reversed.

Surface water salinity ranges from 32 to 37 parts per 1000, the highest occurring in the Arabian Sea and in a belt between southern Africa and south-western Australia. Pack ice and icebergs are found throughout the year south of about 65° south latitude. The average northern limit of icebergs is 45° south latitude.

As the youngest of the major oceans [10] it has active spreading ridges that are part of the worldwide system of mid-ocean ridges:-

The Chagos-Laccadive Ridge is another submerged mountain range runs approximately north-south between Lakshadweep, the Atolls of the Maldives and the Chagos Archipelago.

The Kerguelen Plateau is a small submerged continent, of volcanic origin, in the southern Indian Ocean.

The Mascarene Plateau is 2000 km long undersea plateau that lies east of Madagascar.

The Indian Ocean provides major sea routes connecting the Middle East, Africa, and East Asia with Europe and the Americas. It carries a particularly heavy traffic of petroleum and petroleum products from the oil fields of the Persian Gulf and Indonesia. Large reserves of hydrocarbons are being tapped in the offshore areas of Saudi Arabia, Iran, India, and Western Australia. An estimated 40% of the world's offshore oil production comes from the Indian Ocean.[citation needed] Beach sands rich in heavy minerals, and offshore placer deposits are actively exploited by bordering countries, particularly India, South Africa, Indonesia, Sri Lanka, and Thailand.

Due to the relatively high traffic of petroleum tankers, piracy off the Somali coast has been rising. This has been a threat to international shipping since the second phase of the Somali Civil War in the early 21st century.

The warmth of the Indian Ocean keeps phytoplankton production low, except along the northern fringe and in a few scattered spots elsewhere; life in the ocean is thus limited. Fishing is confined to subsistence levels, because its fish are of great and growing importance to the bordering countries for domestic consumption and export. Fishing fleets from Russia, Japan, South Korea, and Taiwan also exploit the Indian Ocean, mainly for shrimp and tuna.

Endangered marine species include the dugong, seals, turtles, and whales. 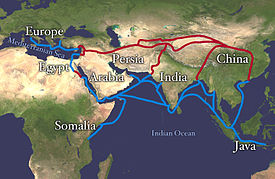 The economically important Silk Road (red) and spice trade routes (blue) were blocked by the Ottoman Empire in ca. 1453 with the fall of the Byzantine Empire. This spurred exploration, and a new sea route around Africa was found, triggering the Age of Discovery.

This 12th-century map of the Indian Ocean by al-Idrisi is so obviously imprecise as to seem almost decorative. (Note its similarity to the islands of the Indian Ocean in his world map) But don’t fault him for trying: It was one thing to be able to sail all the way to China and quite another to explain to a stay-at-home scholar where one had been. It is easy to forget what an achievement even a simple map represented. Until the 15th century, mariners knew maps could indicate relative shapes and sizes, but they were nearly useless for navigation. NATIONAL LIBRARY, CAIRO / GIRAUDON / ART RESOURCE

During Egypt's first dynasty (c. 3000 BC), sailors were sent out onto its waters, journeying to Punt, thought to be part of present-day Somalia. Returning ships brought gold and myrrh. The earliest known maritime trade between Mesopotamia and the Indus Valley (c. 2500 BC) was conducted along the Indian Ocean. Phoenicians of the late 3rd millennium BC may have entered the area, but no settlements resulted.

The Indian Ocean is far calmer, and was thus opened to trade earlier than the Atlantic or Pacific Oceans. The powerful monsoons also meant ships could easily sail west early in the season, then wait a few months and return eastwards. This allowed Indonesian peoples to cross the Indian Ocean to settle in Madagascar.

In the 2nd or 1st century BC, Eudoxus of Cyzicus was the first Greek to cross the Indian Ocean. Hippalus is said to have discovered the direct route from Arabia to India around this time. During the 1st and 2nd centuries AD intensive trade relations developed between Roman Egypt and the Tamil kingdoms of the Cheras, Cholas and Pandyas in Southern India. Like the Indonesian peoples above, the western sailors used the monsoon to cross the ocean. The unknown author of the Periplus of the Erythraean Sea describes this route and the ports and trade goods along the coasts of Africa and India around AD 70.

From 1405 to 1433, Admiral Zheng He led large fleets of the Ming Dynasty on several voyages to the Western Ocean (Chinese name for the Indian Ocean) and reached the coastal country of East Africa (see Zheng He for reference).

In 1497, Portuguese navigator Vasco da Gama rounded the Cape of Good Hope and became the first European to sail to India and later the Far East. The European ships, armed with heavy cannon, quickly dominated trade. Portugal attempted to achieve pre-eminence by setting up forts at the important straits and ports. They dominated trade and discovery along the coasts of Africa, and Asia until the mid 17th century. Later the Portuguese were challenged by other European powers. The Dutch East India Company (1602–1798) sought control of trade with the East across the Indian Ocean. France and Britain established trade companies for the area. Spain established a major trading operation in the Philippines and the Pacific. By 1815, Britain became the principal power in the Indian Ocean.

The opening of the Suez Canal in 1869 revived European interest in the East, but no nation was successful in establishing trade dominance. Since World War II the United Kingdom was forced to withdraw from the area, to be replaced by India, the USSR, and the United States. The last two tried to establish hegemony[citation needed] by negotiating for naval base sites. Developing countries bordering the ocean, however, seek to have it made a "zone of peace"[citation needed] so that they may use its shipping lanes freely. The United Kingdom and United States maintain a military base on Diego Garcia atoll in the middle of the Indian Ocean.

On 26 December 2004, the countries surrounding the Indian Ocean were hit by a tsunami caused by the 2004 Indian Ocean earthquake. The waves resulted in more than 226,000 deaths and over 1 million people were left homeless.

The Indian Ocean is known as Ratnakara in the ancient Sanskrit literature. Ratnakara means "the maker (creator) of gems". It's also called Hindu Mahasagara(m) in Indian languages.

Heading roughly clockwise, the states and territories (in italics) with a coastline on the Indian Ocean are:

Main article: List of ports and harbours of the Indian Ocean

The Port of Singapore is the busiest port in the Indian Ocean, located where it meets the Pacific. Mumbai is the chief trading port in India on the coast of the Indian Ocean, often known as "The Gateway of India". A new port has been developed near Mumbai known as Jawaharlal Nehru Port Trust (JNPT) or more popularly known as Nhava-Sheva to reduce burden on Mumbai. It is amongst world's top 10 fastest growing ports.[citation needed] Marmagoa and New Manglore handle most of the Iron Ore export from India especially to Japan. Kochi is another major Indian port on Arabian Sea. It is a deep natural harbour and is known as "The Queen of the Arabian Sea".[citation needed] Other major South Asian ports include Colombo, Hambantota and Galle in Sri Lanka, Kolkata, Vishakhpatnam, Paradweep, Chennai, Ennore, Tuticorin, and Nagapattinam in India, and Karachi in Pakistan. Aden is a major port in Yemen and controls ships entering Red Sea. Major African ports on shores on Indian Ocean Dar-e-Salem, Zanzibar (Tanzania), Durban, East London, Richard's Bay (South Africa) and Port Louis (Mauritius). Zanzibar is especially famous for its spice export. Other major ports in the Indian Ocean include Muscat (Oman), Yangoon (Myanmar), Jakarta, Medan (Indonesia) and Perth (Australia).