The 1991 Constitution of Romania, adopted on 21 November 1991, voted in the referendum of 8 December 1991 and introduced on the same day, is the current fundamental law that establishes the structure of the government of Romania, the rights and obligations of the country's citizens, and its mode of passing laws. It stands as the basis of the legitimacy of the Romanian government.

The constitution was most recently revised by a national referendum on 18–19 October 2003. The new text took effect on 29 October 2003.

The organic regulation, voted by the respective Assemblies of Moldavia and Wallachia under Imperial Russian occupation in 1831-1832, was the first organic law resembling a constitution ever awarded to the Danubian Principalities. It remained in place until 1858, when the Crimean War removed the two countries from Russian influence and confirmed the rule by several European powers first established by the Treaty of Paris; the Paris Convention of 1858 remained the governing document following the election of Alexander John Cuza as Domnitor over the united countries (1859), but was replaced by Cuza's own organic law, entitled Statutul dezvoltător al Convenţiei de la Paris ("Statute expanding the Paris Convention"), in 1864.

The first constitution of the United Principality (later Kingdom) of Romania was adopted 1 July 1866. After the extension of national territory in 1918, a new constitution was approved 29 March 1923. It was repealed by King Carol II in 1938, when an authoritarian regime formed around the National Renaissance Front adopted a new, corporatist constitution on 27 February this document was, in turn, cancelled in 1940 by the Iron Guard's National Legionary State government. The 1923 constitution was reinstated after the fall of the Ion Antonescu dictatorship in 1944 (see Romania during World War II).

The new constitution of Communist Romania was adopted in 1948 following the Soviet model,[1] with subsequent variants appearing in 1952 and 1965 (the former "building the socialism", the latter announcing the "socialism has won"[1] and notably making the change from a People's Republic to a Socialist Republic). The Communist regime fell in 1989, after which large portions of the 1965 document were suspended, and the present document was adopted in 1991.

The 1991 Constitution enshrined the return to democracy after the fall of the Communist regime. The draft was composed by a committee of parliamentarians and constitutional law specialists; was approved by Parliament, meeting as a Constituent Assembly, by a vote of 414 to 95 on 21 November 1991, being published in Monitorul Oficial the same day; and was approved by referendum on 8 December 1991, with 77.3% voting in favour. The 1991 Constitution contains 7 titles and 152 articles. Romania is defined as a “national, sovereign, independent, unitary and indivisible state”. The form of government is the republic, the president having up to two four-year terms. He represents the Romanian state in domestic and foreign relations, ensures obedience to the constitution and the proper functioning of state institutions, and is the guarantor of the state’s independence, unity and integrity. Parliament is “the supreme representative organ of the Romanian people and the sole lawmaking authority”; it is bicameral (Chamber of Deputies and Senate) and elected for four years. After the prime minister is named by the president, Parliament validates the composition and programme of the Government and can dismiss it following a motion of censure. The constitution provides for fundamental civic rights and freedoms, and creates the office of Romanian Ombudsman to ensure these are respected.[2] 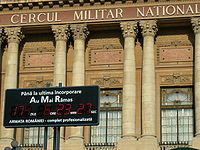 A sign in front of Cercul Militar Naţional counts down to the "complete professionalization" of the Romanian military, that is, the end of conscription (May 2006).

The 1991 Constitution has been amended one time, in 2003. Articles were introduced on “Integration into the European Union” and “NATO Accession”, bringing the total to 156 in 8 titles. These specified that both could take place by parliamentary vote alone, and that EU citizens living in Romania can vote and run in local elections. The new document grants minorities the right to use their native language when dealing with local administration and the courts, improves the functioning of the legislative chambers (better specifying their attributes) and restricts the privilege of parliamentary immunity to political declarations, extends the president’s term to five years, explicitly “guarantees” rather than “protects” the right to private property and removes the constitutional obligation for conscription (which ended in 2006).[2] The revised document was adopted by referendum on 18–19 October 2003; turnout was slightly above the 50%+1 threshold needed for it to be valid, with 55.7% of 17,842,103 eligible voters showing up. The opposition[3] and NGOs[4] alleged serious irregularities. 89.70% voted yes and 8.81%, no. It came into force ten days later.