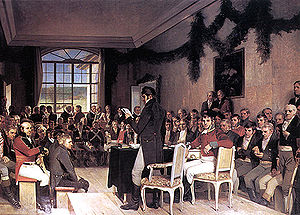 The Constituent Assembly at Eidsvoll, 1814.

The Constitution of Norway was first adopted on May 16, 1814 by the Norwegian Constituent Assembly at Eidsvoll (a small town north of the country's capital, then called Christiania), then signed and dated May 17. It was considered one of the most radically democratic constitutions in the world at the time[citation needed], and is today the oldest single-document national constitution in Europe - the second oldest in the world - still in continuous force. May 17 is now the National Day of Norway.

The Constitution is divided into Articles, numbered 1 to 112. The paragraphs are grouped in five areas:

Following the defeat of Napoleon's troops at the Battle of Leipzig in October 1813 and the Treaty of Kiel of January 1814, the Crown Prince of Denmark-Norway, Christian Frederik, the resident vice-roy in Norway, founded a Norwegian independence movement. The most likely goal of the young Crown Prince was ultimate re-unification with Denmark. His initiative was successful, and a national assembly at Eidsvoll was called. The assembled representatives were elected by the congregations of the state church throughout Norway, and by military units. They convened at the Eidsvoll manor on April 10. During five weeks of the spring of 1814, the constitution was written. The constitution was ratified by the assembly on May 16,[1] and signed the following day, the latter date now celebrated as the Norwegian Constitution Day.

The Norwegian constitution was inspired by the United States Declaration of Independence in 1776 and the French revolution in 1789 and the subsequent U.S. and French constitutions. The authors Christian Magnus Falsen and Johan Gunder Adler were also influenced by the Spanish Constitution of 1812. A deviation from the republican constitutions of France and the USA was the retention of monarchy. Importing republicanism was seen as trying to emulate the French and Americans directly, something the lawmakers at Eidsvoll sought to avoid. The choice of monarchy as state form would also facilitate reunification of Denmark-Norway, something the Crown Prince was not alone in seeking. The king's power was however severely curtailed. His absolute veto over laws was removed. The council of Eidsvoll not surprisingly chose Crown Prince Christian Frederik as king. He was thus chosen, and as such a king by the will of the people rather than by the grace of God. In a Europe where almost all countries were ruled by absolute monarchy, this was seen as extremely radical. Christian Adolph Diriks, who was the legal secretary of the Constitutional Committee, was the assembly's resident expert on foreign constitutions, and played an important part in shaping the language of the constitution. Diriks is credited with formulating §100, concerning freedom of speech, and §102, guarding against unreasonable searches and seizures.[2]

The constitution shows a curious mix of radical and traditional values. The principle of separation of powers between the executive, legislative and judicial branches was directly inspired by the radical ideas from the US and French systems. The retention of a king and a constitutional church in the face of Republicanism were a traditionalist move, however, the kings power were severely curtailed, and the church very much under the control of the elected body. The right to vote was extended, but not made universal. All men who were either farmers possessing their own land, civil servants, or urban property owners could vote. With this, about half of all Norwegian men were granted the right to vote.

The union with Sweden

The young king and Norwegian officials tried to find international backing for their bid for Norway as a sovereign state throughout spring and early summer of 1814. After failing to secure the support of Great Britain, war with Sweden became unavoidable. The Swedish Campaign against Norway was short and decisive. However, while badly trained and equipped, the Norwegian Army put up a determined fight, holding the Swedes back at Kongsvinger and securing a tactical victory at the battle of Langnes. This enabled the King to avoid an unconditional surrender as he was forced into negotiations with the Swedes, leading to the Convention of Moss.

Putting the strategic situation and his own abdication to good use, he persuaded the Swedish crown prince Carl Johan (the former Marshal Bernadotte of France) to let the Norwegians keep their constitution. The Swedish crown prince wanted to appease the Norwegians and avoid a bloody continuation of the war. Realizing that a forced union with himself as ruler of a conquered and hostile country would be very uneasy, he accepted the Norwegian proposition. Norway then entered into a personal union with Sweden, removing only such amendments from its constitution as were necessary to form the Union between Sweden and Norway. On October 7, an extraordinary session of the Storting convened, and king Christian Frederik delegated his powers to the parliament and abdicated on October 10. The Storting adopted the constitutional amendments on November 4 and on the same day unanimously elected Charles XIII king of Norway, rather than acknowledging him as such, thus reinforcing the concept a King by the will of the people.

Dissolution and the second King

The union amendments were revoked after the dissolution of the ninety-one-year-old union in 1905. The question of a King was again considered, and the Storting elected to offer the throne to the 33-year-old Prince Carl of Denmark, married to Princess Maud of Wales, the daughter of King Edward VII. By bringing in a king with British royal ties, it was hoped that Norway could court Britain's support. Prince Carl was however well aware of a surge of republicanism in Norway and of the constitutional situation of the Norwegian throne. He insisted that he would accept the crown only if the Norwegian people expressed their will for monarchy by referendum and if the parliament then elected him king. On November 13, the Norwegian votes decided on monarchy with a 74 percent majority, and Carl was elected King by the Storting, taking the name Haakon VII of Norway.

Several other amendments have been adopted since 1814, the most recent on February 20, 2006. After World War II and the restoration of peace and constitutional rule, there was much debate on how to handle the events of the previous five years. None of this led to any changes in the constitution; it had withstood the test of hard times.

While radical in its day, the constitution of 1814 was a product of its age. As Norwegian democracy developed, some parts of it began to look increasingly dated. For example, the executive power, which in the constitution is consistently attributed to the King, came increasingly to rest in his Council of State (statsråd). Similarly, the King originally had the right to appoint members of the Council, who were answerable to him alone, and they could not be chosen from the members of the Parliament of Norway. With the establishment of parliamentarism in 1884, the Council was effectively chosen by general election, in that the King appointed only members of the party or coalition having a majority in the Storting. Further, the Council became answerable to the Storting, in the sense that a failed vote of confidence would cause the government to resign. This last happened in March 2000, when the governing coalition felt unable to accept the introduction of natural gas power stations (considering it dangerous to the environment), which a majority of the Storting supported.[citation needed]

In addition to these changes in practice, there have been many amendments and changes to the actual text. A relic from the earlier laws of Denmark-Norway, Paragraph 2 originally read, "The Evangelical-Lutheran religion remains the public religion of the State. Those inhabitants, who confess thereto, are bound to raise their children to the same. Jesuits and monastic orders are not permitted. Jews are still prohibited from entry to the Realm." In 1851 the last sentence was struck after the famous Norwegian poet Henrik Wergeland had campaigned for the rights of the Jews, and in 1897 also the next but last sentence. Monastic orders were permitted 1897, but he ban on Jesuits was only lifted 1956.§12 in the constitution still states that more than half of the persons in the Council of State have to be members of the state church, a paragraph that has grown strongly controversial.[3][4][5]

Universal male suffrage was introduced in Norway in 1898 and universal suffrage in 1913 by amendments of the constitution. 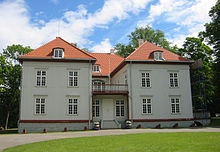 Eidsvollsbygningen, the site of the drafting of the constitution

From time to time proposals are made to separate the church from the state, which would imply an amendment of § 2 of the constitution. This has never been supported by a majority in the Storting but is constantly a matter of debate.

The Norwegian High Court of the Realm is warranted by the constitution and was frequently (mis)used by the Storting as a political tool to control the government during the 19th century, but no impeachments have been made since 1927. A parliamentary report and a proposition for constitutional amendment was presented in 2004 to change the legal basis of the High Court of the Realm and reduce its political bias.[6] The proposal was passed by a unanimous Storting on February 20, 2007. The court will be composed of five regular Supreme Court of Norway judges and six lay judges appointed by the Storting, instead of the whole Supreme Court plus the Lagting (1/4 of the Storting).

Some constitutional scholars hold that it may be necessary to change the constitution if Norway is to enter the European Union. However, the debate on the EU has been relatively quiescent since the referendum in 1994, so such a change is not likely to occur for some years.

The events and the constitution of 1814 have a central place in Norwegian identity. For this reason, and to keep the text as consistent as possible, changes are written in a language close to the original. In 1814 Danish was still the universal written language. The current two official varieties of written Norwegian language, Bokmål and Nynorsk (until 1929 called Riksmål and Landsmål respectively), were not developed until the late 19th century. In 1903 the constitution underwent a very slight linguistic revision, changing the spelling of some words where orthography had changed since 1814, but still retaining a conservative 19th century Danish.

All recent amendments have attempted to imitate the language of the 1903 version, leading to peculiar constructions. The word "environment" is written in the ancient spelling milieu, differing from modern Norwegian and Danish miljø; the modern context of that word was, however, non-existing in the 19th century. The "Sami ethnical group" is "den samiske Folkegruppe", even if the word Sami (samisk) was not common until the 1970s. In 1814 or 1903, the word Lappish (lappisk) would have been used.

Since amendments are elaborated by politicians not competent in 19th century Danish, several modern Norwegian spellings have sneaked into the constitution. Different approaches to revise the language throughout the document have been suggested:

A constitutional amendment of February 2, 2006 was aimed at reverting 16 minor spelling errors to the proper 1903 forms.

Though Norway is not the only country to have a constitution written in a foreign language, it is certainly the only state to compose new law material in an archaic language form, apart from the Vatican which uses Latin. Even the official name of the Kingdom of Norway (Norwegian: Kongeriket Norge/Kongeriket Noreg) would in fact be the Danish form Kongeriget Norge if taken literally from the constitution.

Rituals relating to the Constitution

The 17th of May, the date of the signing of the constitution, is celebrated as Norwegian Constitution Day with the school children's flag parades. In the capital Oslo, the parade passes the Royal Palace where thousands of schoolchildren wave to the King and Queen. A notable feature of the Norwegian Constitution Day celebration is the virtual absence of any military parades, the day being almost wholly a civilian celebration.