The Democratic Liberal Party (Romanian: Partidul Democrat-Liberal, PD-L or PDL) is a populist, centre-right party in Romania. It was formed on 15 December 2007, when the Democratic Party (Romanian: Partidul Democrat, PD) merged with the Liberal Democratic Party. From 2004 to 2007, the Democratic Party was part of the governing Justice and Truth Alliance. Although he had to formally suspend his leadership of the party when elected president in 2004, the PLD is largely associated with Romanian president Traian Băsescu, who was previously leader of the Democratic Party as well as being a founding member. The PLD executive leadership has already stated publicly that it would support Băsescu's candidacy for Romania's next presidential elections. The party has also worked to ensure that its positions in the parliament reflect Băsescu's priorities.

In 2008, the Democratic Liberal Party won the most seats in the latest legislative election in both the Chamber of Deputies and the Senate, and formed a new government coalition with the Social Democratic Party.[citation needed]

PD traces its roots in the National Salvation Front (FSN), the body which, under the leadership of Ion Iliescu, seized power during the Romanian Revolution of 1989 which ended the Communist regime. The organization, originally announced that it is not a party and it would not nominate candidates in the elections it organized. However, in February 1990, it registered as a party and won the elections, with the help of the state-owned media under its control.[3]

Conflicts broke out between FSN leaders Ion Iliescu and Petre Roman in early 1992, and this led to the separation of the Iliescu wing under the name of Democratic National Salvation Front (FDSN), which later became the Social Democratic Party (PSD).[4]

FSN was defeated by the FDSN in the 1992 legislative election and spent the next four years in opposition. In 1993 the FSN changed its name to the Democratic Party (PSD). In the 1996 legislative election, PD ran jointly with the now-defunct Romanian Social Democratic Party (PSDR), under the name Uniunea Social-Democrată (USD). After having ranked third, they joined a governing coalition with the Romanian Democratic Convention (CDR) and the ethnic Hungarian party UDMR.[5] From 2000 to 2004 PD has been again in opposition.

In advance of the 2004 elections the party joined forces with the National Liberal Party (PNL) to create the Justice and Truth Alliance, whose main purpose was to fight the all-dominating Social Democratic Party.

The Truth and Justice Alliance managed to win around 32% of the votes in both Chambers, not enough for a majority and about 6% less than PSD. Together with its Liberal allies, the Democratic Union of Hungarians in Romania and the Conservative Party, the Democratic Party was part of the governing coalition until April 2007.

During the Congress of 2005, the Democratic Party members voted in favor of joining the European People's Party, abandoning the party's previous membership of the Party of European Socialists and Socialist International. In 2005, Petre Roman left the party and together with his followers formed the Democratic Force.

From mid-2005, the PD's relations with the PNL also became strained due to an ongoing open conflict between Băsescu and Prime Minister Călin Popescu-Tăriceanu, who is also chairman of the PNL. After his presidential victory in 2004, Băsescu appointed Tăriceanu as prime minister. Although he wanted to, he could not constitutionally dismiss him; at least, it took him a while.

On 1 April 2007, Tăriceanu dismissed the ministers of Democratic Party and formed a minority government.[6]

On 15 December 2007 the organisation changed its name to the Democratic Liberal Party and merged with the Liberal Democratic Party (PLD). The PLD approved the merger in a party congress with 933 in favour, six abstentions and one against.[7] 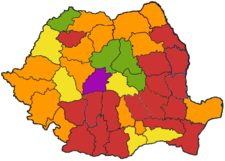 The political doctrine of the Democratic Party has shifted from social democracy to centrism and greater conservatism since 2004, combined with economic liberalism and reformism. The party supports a consolidation of the free market and is supportive of Romania's flat tax rate of 16%. The party also supports reforming the Romanian Constitution in order to bring about a decentralization in administration and give greater power to the eight development regions.

Currently, the PDL Chamber of Deputies group has 69 members, of which