The Kingdom of Roumania (or '' in post-1969, and also current, spelling) was the old Romanian state based on a form of parliamentary monarchy between March 13th, 1881 and December 30th, 1947, specified by the First (in 1866), and respectively, the Second Constitution of Roumania. Thus, the Kingdom of Romania began with the reign of King who gained Romanian's independence in the , and ended with the abdication of King in December 30th, 1947, imposed by the Soviet Union with the tacit and secret, implicit consent of its allies (as a result of the and secret agreements). As such, it is quite distinct from the 'Old Kingdom of Romania' (or ) which refers strictly to the reign of King Carol I of Romania (also known as 'King Charles the 1st of Roumania'), between March 13th, 1881 and October 10th, 1914. 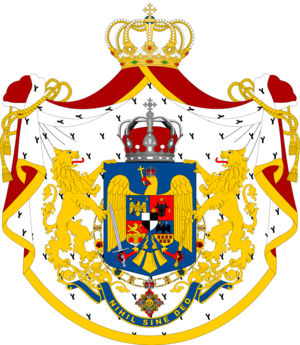 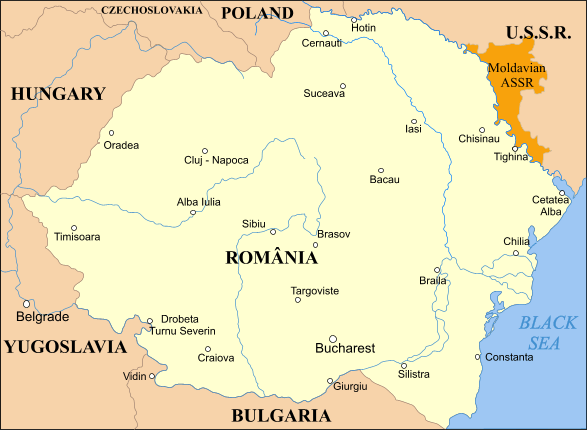 From 1859 to 1877, evolved from a of two vassal principalities ( and ) under a single prince to a full-fledged independent kingdom with a monarchy. In 1918, at the end of , , Eastern Moldavia (), and united with the Kingdom of Romania, resulting in a "". In 1940, at the beginning of , Northern , Basarabia and were ceded to , and respectively, only Northern Transylvania being recovered after World War II ended. In 1947 the monarchy was replaced by a communist regime.__TOC__

The 1859 ascendancy of as prince of both Moldavia and Wallachia under the nominal of the united an identifiably Romanian nation under a single ruler. On , ( Old Style) the two principalities were formally united to form Romania, with as its capital.

On , a so-called "Monstrous coalition", composed of Conservatives and radical Liberals, forced Cuza to abdicate. The German prince Carol (Charles) of Hohenzollern-Sigmaringen was appointed as Prince of Romania, in a move to assure German backing to unity and future independence. His descendants were to rule as the until the rise of the communists in 1947.In 1877, following a Russian-Romanian-Turkish war, Romania was recognized as independent by the , and acquired , although she was forced to surrender southern Bessarabia () to Russia. Charles was crowned as Carol, the first King of Romania, in 1881.

The new state, squeezed between the Ottoman, Austro-Hungarian, and Russian empires, with Slavic populations on its southwestern, southern and northeastern borders, the Black Sea due east, and Magyar neighbors on its western and northwestern borders, looked to the West, particularly , for its cultural, educational and administrative models.

Abstaining from the Initial Balkan War against the Ottoman Empire, Romania entered the in June 1913 against Bulgaria. 330,000 Romanian troops moved across the Danube and into Bulgaria. One army occupied Southern Dobrudja and another moved into northern Bulgaria to threaten Sofia, helping to bring an end to the war. Romania thus acquired the ethnically-mixed territory of Southern Dobrudja, which it had desired for years.

In 1916 Romania entered on the Entente side, but was quickly defeated and occupied by German and Austro-Hungarian forces. Romania engages in a conflict against Bulgaria but as a result Bulgarian forces, after a series of successful battles, regain Dobruja that was previously taken from Bulgaria by the treaty of Bucharest and the Berlin congress. Although the Romanian forces did not fare well militarily, by the end of the war the Austrian and Russian empires were gone; governing bodies created in Transylvania, Bessarabia and Bukovina chose union with Romania, upheld in 1919 the and in 1920 by the .

The Romanian Old Kingdom (Romanian: "Vechiul Regat" or just "Regat"; German: "Regat" or "Altreich") is a colloquial term referring to the territory covered by the first independent Romanian , which was composed of the &mdash; Wallachia and Moldavia. It was achieved when, under the auspices of the , the of both countries - which were under Imperial Ottoman at the time - voted for as their prince, thus achieving a "" unification. The region itself is defined by the result of that political act, followed by the inclusion of in 1878, the proclamation of the in 1881, and the annexation of in 1913.

The term came into use after World War I, when the Old Kingdom was opposed to , which included Transylvania, , Bessarabia, and Bukovina. Nowadays, the term mainly has a historical relevance, and is otherwise used as a common term for all regions in Romania included in both the Old Kingdom and present-day borders (namely: Wallachia, Moldavia, and Northern Dobruja).

The Romanian military campaign ended in disaster for Romania as the conquered two-thirds of the country and captured or killed the majority of its army within four months. Nevertheless, remained in Romanian hands after the invading forces were stopped in 1917. Since by the war's end, Austria-Hungary and the Russian Empire had collapsed, Bessarabia, Bukovina and Transylvania were ceded to the Kingdom of Romania in 1918.

Union with Transylvania, Bessarabia and Bukovina

After World War I, during 1918, Transylvania, part of Banat, Bessarabia (Eastern Moldavia between Prut and Dniester rivers) and Bukovina unite with Romania. Except for some territories across the , all these territories were united in a single state.

By the 1920 , renounced in favour of Romania all the claims of the over . [citeweb|url=http://wwi.lib.byu.edu/index.php/Treaty_of_Trianon|title=Text of the Treaty of Trianon|publisher=World War I Document Archive|accessdate=2007-12-07] The union of Romania with was ratified in 1919 in the , [citebook|url=http://books.google.com/books?id=ox_gXq2jpdYC&pg=PA162&lpg=PA162&dq=treaty+of+st+germain+text+bukovina&source=web&ots=naxO-x01Oy&sig=JK8wTD6USXqEM_L_1yqw7C_f6wM#PPA162,M1|title=Europe Since 1945: An Encyclopedia|author=Bernard Anthony Cook|page=162|isbn=0815340575|year=2001|publisher=Taylor&Francis|accessdate=2007-12-07] and with Bessarabia in 1920 by the Treaty of Paris. [citejournal|title=The Legal Status of the Bukovina and Bessarabia|author=Malbone W. Graham|journal=The American Journal of International Law|month=October | year=1944|volume=38|issue=4|pubisher=American Society of International Law|url=http://www.jstor.org/view/00029300/di981654/98p0431z/2?frame=noframe&userID=83d7a986@caltech.edu/01c0a80a6a00501cd629c&dpi=3&config=jstor|accessdate=2007-12-08|format=dead link|date=June 2008 &ndash; [http://scholar.google.co.uk/scholar?hl=en&lr=&q=author%3A+intitle%3AThe+Legal+Status+of+the+Bukovina+and+Bessarabia&as_publication=The+American+Journal+of+International+Law&as_ylo=&as_yhi=&btnG=Search Scholar search] ]

The Romanian expression România Mare (literal translation "Great Romania", but more commonly rendered "Greater Romania") generally refers to the Romanian state in the , and by extension, to the territory Romania covered at the time (see map). Romania achieved at that time its greatest territorial extent (almost 300,000 km² [ro icon [http://media.ici.ro/history/ist08.htm STATUL NATIONAL UNITAR (ROMÂNIA MARE 1919 - 1940)] ] ).
[
and but were lost after , and rose indicates areas that joined Romania after World War I and remained so after World War II.]

The resulting "Greater Romania" did not survive World War II. Until 1938, Romania's governments maintained the form, if not always the substance, of a liberal constitutional monarchy. The National Liberal Party, dominant in the years immediately after World War I, became increasingly clientelist and nationalist, and in 1927 was supplanted in power by the . Between 1930 and 1940 there were over 25 separate governments; on several occasions in the last few years before World War II, conflict between the and other political groupings approached the level of a civil war.Upon the death in 1927 of his father Ferdinand, Prince Carol was prevented from succeeding him because of previous marital scandals that had resulted in his renunciation of rights to the throne. After serving three years in exile, with his brother Nicolae serving as regent and his young son Michael as king, Carol changed his mind and with the support of the ruling National Peasant Party he returned and proclaimed himself king.
, leader of the National Peasant Party, engineered Carol's return on the understanding that he would forsake his mistress , and Lupescu herself had agreed to the arrangement. However, it became clear upon Carol's first re-encounter with Elena that she had no interest in a reconciliation, and Carol soon arranged for Lupescu's return to his side. Her unpopularity in Romania, no doubt due in large part to her having a ish father, was to be a millstone around Carol's neck for the rest of his reign, particularly because she was widely viewed as his closest advisor and confidante.

The 1929 economic crisis greatly affected Romania and the early 1930s were marked by social unrest, high unemployment, and strikes. In several instances, the Romanian government violently repressed strikes and riots, notably the 1929 miners' strike in and the strike in the Griviţa railroad workshops. In the mid-1930s, the Romanian economy recovered and the industry grew significantly, although about 80% of Romanians were still employed in agriculture.

As the 1930s progressed, Romania's already shaky democracy slowly deteriorated toward fascist dictatorship. The constititution of 1923 gave the king free rein to dissolve parliament and call elections at will; as a result, Romania was to experience over 25 governments in a decade.

Increasingly, these governments were dominated by any of a number of anti-Semitic, ultra-nationalist, and mostly at least quasi-fascist parties. The National Liberal Party steadily became more nationalistic than liberal, but nonetheless lost its dominance over Romanian politics. It was eclipsed by parties like the (relatively moderate) National Peasant Party and its more radical offshoot, the (LANC) and the . In 1935 LANC merged with the to form the (NCP). The quasi-mystical fascist Iron Guard was an earlier LANC offshoot that, even more than these other parties, exploited nationalism, fear of communism, and resentment of alleged foreign and ish domination of the economy.

Already, the Iron Guard had embraced the politics of assassination and various governments had reacted more or less in kind. On , , Liberal prime minister "dissolved" the Iron Guard, arresting thousands; 19 days later he was assassinated by Iron Guard legionnaires.

Throughout the 1930s, these nationalist parties had a mutually distrustful relationship with King Carol II. Nonetheless, in December 1937, the king appointed LANC leader (and poet) as prime minister. Around this time, Carol met with , who expressed his wish to see a Romanian government headed by the Iron Guard. Instead, on , King Carol II used the occasion of a public insult by Goga to toward Lupescu as a reason to dismiss the government and institute a short-lived royal dictatorship, sanctioned seventeen days later by a new constitution under which the king named not only the prime minister but "all" ministers.

On , , in order to prevent the formation of a government that would have included Iron Guard ministers, and in direct confrontation to Adolf Hitler's expressed support of the Iron Guard, King Carol II dismissed the government and instituted a short-lived royal dictatorship, raising the stakes on both sides. In April 1938, Carol had Iron Guard leader arrested and imprisoned. On the night of -30, 1938, Codreanu and several other legionnaires were killed while purportedly attempting to escape from prison. It is generally agreed that there was no such escape attempt, but that they were murdered in retaliation for a series of assassinations by Iron Guard commandos.

The royal dictatorship was brief. On , a new government was formed with as prime minister; on , , three weeks after the start of World War II, Călinescu, in turn, was assassinated by legionnaires avenging Codreanu.

In 1939 Germany and the signed the , which stipulated, among other things, the Soviet "interest" in Bessarabia.

*
* [http://www.the-map-as-history.com/demos/tome03/index.php Video with the redrawing of the borders after the First World War]