Automotive industry in the People's Republic of China

Automotive industry in the People's Republic of China 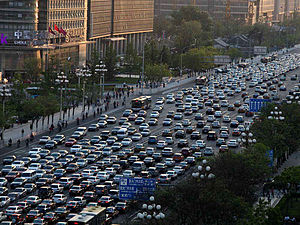 Since late 2008, the People's Republic of China has been the largest automotive market in the world.[1][2][3] China's automobile industry has been in rapid development since the early 1990s. In 2009, China produced 13.79 million automobiles, of which 8 million were passenger cars (sedans, sport utility vehicles (SUV), multi-purpose vehicles (MPV) and crossovers), and 3.41 million were commercial vehicles (buses, trucks, and tractors). Of the automobiles produced, 44.3% are local brands (BYD, Lifan, Chang'an (Chana), Geely, Chery, Hafei, Jianghuai (JAC), Great Wall, Roewe, etc.), the rest being produced by joint ventures with foreign car makers such as Volkswagen, Mitsubishi, General Motors, Hyundai, Nissan, Honda, Toyota etc. Most of the cars manufactured in China are sold within China, with only 369,600 cars being exported in 2009.

China's annual automobile production capacity first exceeded one million in 1992. By 2000, China was producing over two million vehicles. After China's entry into the World Trade Organization (WTO) in 2001, the development of the automobile market further accelerated. Between 2002 and 2007, China's national automobile market grew by an average 21 percent, or one million vehicles year-on-year. In 2006, China’s vehicle production capacity successively exceeded six, then seven million, and in 2007, China produced over eight million automobiles.[4] In 2009, 13.759 million motor vehicles were manufactured in China, surpassing United States as the world's largest automobile market in the world. In 2010, both sales and production topped 18 million units, with 13.76 million passenger cars delivered, this is a new world record for the most number of cars sold in a single country in human history.[5]

The consultancy McKinsey & Company estimates that China's car market will grow tenfold between 2005 and 2030.[7]

The main national industry group is the China Association of Automobile Manufacturers (中国汽车工业协会).

China surpassed Japan to become the world's No. 2 vehicle market in 2006 and passed the United States to be the biggest in 2009[citation needed]. This growth is spurring demand for automotive parts, services, and after-care products. China is presently capable of manufacturing a complete line of automobile products and large automotive enterprises. Major domestic firms include the China First Automobile Group Corp. (FAW), Dongfeng Motor Corp. (DMC) and Shanghai Automotive Industry (Group) Corp. (SAIC).

China had a total of 6322 automotive enterprises by the end of November 2006[citation needed]. The total output value of the automotive sector for the first three quarters of 2006 was US$143 billion[citation needed]. Since 2002, 50% of all motor vehicles (cars and trucks) in China had been purchased by individuals[citation needed]. As incomes increase the high annual growth rate of private ownership is expected to accelerate.

China encourages the development of clean and fuel efficient vehicles in an effort to sustain continued growth of the country’s automobile industry (see Fuel economy in automobiles). By the end of 2007, China plans to reduce the average fuel consumption per 100 km for all types of vehicles by 10%. The proportion of vehicles burning alternate fuel will be increased to help optimize the country's energy consumption. Priority will be given to facilitating the research and development of electric and hybrid vehicles as well as alternate fuel vehicles, especially CNG/LNG. Major cities like Beijing and Shanghai already require Euro III emission standards.In 2009,Beijing will be the first city to require GUO IV emission standards(Euro IV emission standards).

The Chinese Automotive Industry Plan, announced on the main Web site of China's central government, said China aims to create capacity to produce 500,000 "new energy" vehicles, such as battery electric cars and plug-in hybrid vehicles. The plan aims to increase sales of such new-energy cars to account for about 5% of China's passenger vehicle sales.[8] At the 2010 Beijing Motor Show, more than 20 electric vehicles were on display, most of which came from native automakers. As of May 2010, at least 10 all-electric models have been reported to be on track for volume-production.[9] The first mass produced plug-in hybrid car (BYD F3DM), all-electric minivan (Luxgen 7 MPV EV) and all-electric long-range bus (500 km range Zonda Bus) are Chinese.

China subsidies oil[10] and some Chinese automakers see opportunities in less mature electric vehicles because Western companies have yet to develop much of a lead in the technology.[11][12]

Although there are case-by-case exceptions for antiques and diplomats, it is currently illegal to import used motor vehicles into China. Refurbished heavy construction equipment can be imported with a special permit. Used and refurbished auto parts are not allowed to be imported into China.

Although improvements have been made in this field in the past decade, China's after-sales products and services still lag far behind those of developed countries. However, WTO commitments have brought about significant changes in the after-sale market. China’s aftercare market now faces the following challenges:

In most cases, brand-name new cars can be purchased only from 4S shops. For new cars in high demand, a high premium is added for instant delivery or just placing an order.

The profit of car dealers in China is quite high comparing to the rest of the world, in most cases 10%. This is due to the non-transparent invoice price as announced by manufactures and to the premiums they charge for quick delivery. Due to the lack of knowledge for most customers, dealers can sell add-ons at much higher prices than the aftermarket.

There is no regulation by either the government or associations.

The passenger car industry was a minor part of vehicle production during the first three decades of China’s socialist economy. As late as 1985, the country produced a total of only 5,200 cars. As domestic production could not meet demand,import totals rose dramatically, despite a 260 per cent import duty on foreign vehicles. The country spent some $3 billion to import more than 350,000 vehicles (including 106,000 cars and 111,000 trucks) in 1985 alone. Three taxi companies in particular thirsted for Japanese cars, such as Toyota Crowns and Nissan Bluebirds.[13]

China’s answer to the import binge was to sign a series of joint-venture passenger car production agreements. In 1983, American Motors Corporation (AMC, later acquired by Chrysler Corporation) signed a 20-year contract to produce their Jeep-model vehicles in Beijing. The following year, Germany’s Volkswagen signed a 25-year contract to make passenger cars in Shanghai, and France’s Peugeot agreed to another passenger car project to make vehicles in the prosperous southern city of Guangzhou.[13]

Some of Chinese cars makers have been accused of copying designs of other companies.[14] This judgement can seem to be harsh, as it is clear that the Russian car industry had been founded on the same principle; the Mosckvich was produced from tooling taken from German Opel factories in 1945, the later 408 was a scaled down Ford Zephyr and the Gaz Chaika was copied from Packard. The Russians acknowledged this in that there was no point in repeating the development process that had already gone on in the rest of the world.

Some BYD cars may look similar to those of other brands including Lexus,[15] Toyota,[16] Honda,[17] Mercedes Benz,[18] and Porsche.[19] For example, the BYD S8 bears similarity to the Mercedes CLK from the front, and the Renault Megane CC or third generation Chrysler Sebring convertible from the rear.[20]

A staff member[who?] at Honda claimed that the BYD F3 was "a known copy" of the Toyota Corolla (with Honda Fit design cues).[21] Another model too, the BYD F1, has been described[by whom?] as "a clear copy" this time of the Toyota Aygo.[22]

Domestic dealerships have been known to take advantage of this and replace the badging of BYD vehicles with those of other car manufacturers, including Toyota.[21] Micheal Austin, vice president of BYD America, has acknowledged the issue saying that the practices done by dealers (which are franchised) has made BYD "uncomfortable".[21]

After mediation attempts failed, GM Daewoo brought a case against Chery in a Shanghai court, but by 2005 jurisdiction had been moved[25] to the Beijing No.1 Intermediate People's Court.[26]

Around that time Chinese state officials, including a vice-minister of commerce and a vice-director of the State Intellectual Property Office, publicly supported Chery.[26] It was suggested that GM may have not patented its technology.[26] In late 2005 the lawsuit was settled.[23]

Fiat company has claimed that a Great Wall A-segment car, the Peri (Jing Ling in China), is a copy of its 2nd-generation Fiat Panda.[27]

A 2008 Italian Turin court ruling substantiated the claim stating that the Great Wall Peri, “doesn’t look like a different car but is a [Fiat] Panda with a different front end.”[28]

A copyright infringement case in China did not see a similar outcome.[clarification needed][citation needed]

In May 2009 a Greek judge ruled against Daimler and cleared the car allowing sales to begin in Greece. The judge answering to Daimler's demand to ban the Chinese vehicle from entering the Greek market said that “The impression the Noble makes on a third and informed party by its visual appearance is different to the one that is made to the same person by the Smart . . . It is commonly accepted that the decision over buying a new car cannot be based only on the exterior characteristics but many other technical specifications such as the power of the engine, fuel consumption, trim specification, retail price and dealers’ network.”[31]

The ruling states that the latter party’s doings “cannot possibly misguide the public” as the German company claimed in its legal request. The judge noted the salient fact that “the plaintiff is no longer selling the specific generation of the Smart which claims to have been copied, but a different vehicle, with much different characteristics.”

The Wall Street Journal reported that the government of China will be forcing foreign carmakers to disclose their electric vehicle technology secrets before the vehicles are allowed to be sold in China. The current Chinese automotive policy states that a foreign carmaker must form a joint-venture with a Chinese carmaker if the former plans to sell its electric vehicles there, with the latter holding 51% stakes while the former is only allowed to hold 49% stakes.

Due to the threat by the Chinese government, Toyota postponed the launch of the current-generation Prius until they have been confirmed about the plan.[32]

There are at least two Chinese automobile manufacturers building HMMWV copies, possibly with the assistance of AM General. Both Chinese HMMWV vehicles rely on imported U.S.-made parts including chassis, gear box, and diesel engine. It appears that at least one company, Dongfeng Motor Corporation (DFM), has the full consent and cooperation of AM General. Both manufacturers claimed that they will be able to gradually increase the percentage of indigenously made content on the vehicles in the future, since the PLA is unlikely to be willing to accept any equipment that relies largely on foreign made parts.

The Shenyang Aircraft Industry Co (SAC) version called "Zhanshen," for God of War, is trying to impress the PLA with a vehicle-mounted mobile air defence missile system jointly developed with NORINCO, the primary weapon manufacturer in China. The missile system, mounted on an SAC SFQ2040, is similar to the U.S. Army HMMVEE-mounted Avenger air defence system. SAC also emphasizes the low cost of its SFQ2040, only one third of the price of the U.S.-made HMWWV.

In 2005, 5,707,688 motor vehicles were manufactured in China. The following 13 foreign makers have joint venture factories, with local partners, in China.

Currently Toyota is the only company making hybrids in China. It sold 2,000 in 2006.