The Toyota Corolla is a line of subcompact and compact cars manufactured by the Japanese automaker Toyota, which has become very popular throughout the world since the nameplate was first introduced in 1966. In 1997, the Corolla became the best selling nameplate in the world, with over 35 million sold as of 2007, surpassing the Volkswagen Beetle.[2] Over the past 40 years, one Corolla car has been sold on average every 40 seconds.[3] The series has undergone several major redesigns.

The name Corolla is part of Toyota's naming tradition of using the name Crown for primary models: the Corona, for example, gets its name from the Latin for crown; Corolla is Latin for small crown; and Camry is an Anglicized pronunciation of the Japanese for crown, kanmuri.

The Corolla's chassis designation code is "E", as described in Toyota's chassis and engine codes. 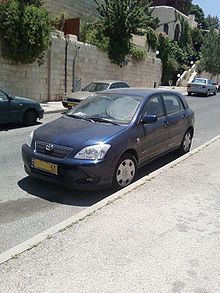 A slightly upmarket version called the Sprinter was sold in the Japanese home market. It was replaced in 2001 by the Allex, which was then replaced by the Blade in 2009.

There have also been several models over the years, including the Corolla Ceres (and similar Sprinter Marino) hardtop, Corolla Levin and Sprinter Trueno sports coupés and hatchbacks, and the Corolla FX hatchback, which became the Corolla RunX, while the Sprinter became the Allex with the introduction of the ZZE128 Corolla. The RunX and Allex was replaced by the Auris in 2006 (known only as Corolla in markets outside of Japan). A compact MPV named the Corolla Verso has also been released in European markets. Its Japanese counterpart is the Corolla Spacio, which has been discontinued as of the 10th generation. The Corolla Rumion is also sold in the US-market as the Scion xB.

The Corolla Matrix, better known just as the Matrix, shares the E120 and E140 platforms, and is considered the hatchback/sport wagon counterpart of the North American Corolla sedan, as the European/Australasian Corolla hatchback is not sold there. Toyota frequently combines the sales figures of the Corolla sedan and Matrix. The Pontiac Vibe, which is the General Motors badged version of the Matrix, also shares the Corolla platform. The Pontiac Vibe was exported from Fremont, California to the Japanese market where it was badged Toyota Voltz. [5]

Over many years, there have been rebadged versions of the Corolla, sold by General Motors, including the 1980s' Holden Nova of Australia, and the Sprinter-based Chevrolet Nova, Chevrolet Prizm, and Geo Prizm (in the United States). The Corolla liftback (TE72) of Toyota Australia was badged as simply the T-18. The five-door liftback was sold with the Corolla Seca name in Australia and the nameplate survived on successive five-door models.

The Daihatsu Charmant was produced with the E30 through E70 series.

The Tercel was a front wheel drive car, first introduced in 1980 and was called the Corolla Tercel then, and later given its own name in 1984.

The Tercel chassis was also used for the Corolla II hatchback in Japan. 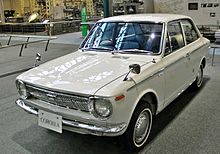 The first Corolla generation was introduced in October 1966 with the new 1100 cc K pushrod engine. The Corolla Sprinter was introduced as the fastback version in 1968.

April 1974 brought rounder, bigger and heavier Corollas and Sprinters. The range was rounded out with the addition of a two-door liftback. The Corollas were given E30 codes while the Sprinters were given E40 codes. A face-lift in March 1976 saw most Corolla E30 models replaced by equivalent E50 models and most Sprinter E40 models were replaced by equivalent E60 models.

A major restyle in March 1979 brought a square edged design. The Corollas had a simpler treatment of the grill, headlights and taillights while the Sprinter used a slightly more complex, sculptured treatment. The new A series engines were added to the range as a running change. This was the last model to use the K "hicam" and T series engines.

A sloping front bonnet and a contemporary sharp-edged, no-frills style was brought in during May 1983. The new 1839 cc 1C diesel engine was added to the range with the E80 Series. From 1985, re-badged E80 Corollas were sold in the U.S. as the fifth generation Chevrolet Nova.

Most models now used the front wheel drive layout except the AE85 and AE86, which were to be the last Corollas offered in the rear wheel drive or FR layout. The AE85 and AE86 chassis codes were also used for the Sprinter (including the Sprinter Trueno). The Sprinter was nearly identical to the Corolla, differing only by minor body styling changes such as pop-up headlights.

A somewhat more rounded and aerodynamic style was used for the E90 introduced in May 1987. Overall this generation has a more refined feel than older Corollas and other older subcompacts. Most models were now front wheel drive, along with a few 4WD All-Trac models. Many engines were used on a wide array of trim levels and models, ranging from the 1.3 liter 2E to the 165 horsepower (123 kW) supercharged 4A-GZE. The E90 Corolla was also rebadged and sold as the Geo Prizm (US) or Holden Nova (Australia).

In June 1991 Corollas received a redesign to be larger, heavier, and have the completely rounded, aerodynamic shape of the 1990s. The Corolla was now in the compact class, rather than subcompact, and the coupe still available known as Corolla Levin AE101.

May 1995 saw a complete redesign for the Corolla. External differences from the E100 series were obvious. Evolutionary technological improvements continued, however, and in 1998, for the first time, some non-Japanese Corollas received the new 1ZZ-FE engine. The new engine was the first in a Toyota to have an aluminum engine block and aluminum cylinder heads, which made this generation lighter than the E100 Corolla. The model range began to change as Toyota decided styling differences would improve sales in different markets. This generation was delayed in North America until mid 1997 (US 1998 model year), where it had unique front and rear styling. Europe and Australasia received versions of their own as well.

In November 2000, the ninth-generation Corolla was introduced in Japan, with edgier styling and more technology to bring the nameplate into the 21st century. It is also called the Corolla Altis in the ASEAN region. The station wagon model is called the Corolla Fielder in Japan. The North American release was delayed until March 2002 (2003 MY).

The US Insurance Institute for Highway Safety rated the 1998-2002 models as "Acceptable" in their 40 mph (64 km/h) frontal offset crash test. Initial 2003 models had an overall "Good" rating, but received a "Marginal" on left foot injury protection. A rebuild beginning December 2002, which continues through to the 2008 model, gives the Corolla a "Good" rating in all aspects of the test. Corolla models from model year 2005 to 2008 with optional side curtain air bags received an "Acceptable" rating in the side impact crash test, largely due to a "Marginal" rating in structure/safety cage design. Otherwise, injury protection ratings for driver and rear passenger were all good except for driver pelvis/leg injury protection, which was "Acceptable". The Corolla from model year 2009 to present with standard side curtain air bags received a "Good" rating in both the frontal offset and side impact crash test.[8]

Euro NCAP ratings are as follows: