Publishing industry in the People's Republic of China

Publishing industry in the People's Republic of China

The Chinese publishing industry has continued to grow. In 2004 China published 25.77 billion copies of national-level and provincial-level newspapers, 2.69 billion magazines, and 6.44 billion books. 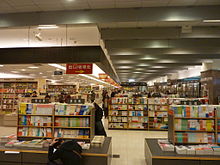 Inside Chongwen Book City, a popular bookstore in Wuhan

Since China began incorporation of its publishing industry in 2002, altogether 55 publishing groups have been set up. The largest, China Publishing Group (in Chinese: 中国出版集团), established in April 2003, has under its umbrella 12 large enterprises and institutes including the Commercial Press, the Zhonghua Book Company, the DSX Book Company, and the main store of the Xinhua Bookstore, China International Publishing Trade Corporation, and China Book Import and Export (Group) Corporation. The Group incorporates publishing and distribution of publications involving various media, chain stores, import and export, copyright trade, printing and copying, information service, technology development and financing. According to a national plan, by the end of 2005, China will have five to 10 publishing groups each with annual sales of between one and even 10 billion yuan; 10 to 20 periodicals with world-wide distribution and one or two periodical groups with annual sales of 300 to 500 million yuan.

Today, there are 568 publishing houses and 292 audio-video publishers in China. The state has also planned key book publication projects and established prizes for excellent books to promote the development of the publishing industry.

The China International Publishing Group (CIPG, in Chinese: 中国国际出版集团) undertakes the publication, printing and distribution of foreign-language books and periodicals, playing a unique role in publishing, cultural exchange and cooperation. It consists of four print magazines and several websites in many languages including English, French, Spanish, Arabic, Japanese, Esperanto and Chinese.

The four magazines are Beijing Review, China Today, China Pictorial, and People's China. It also has seven publishing houses, including Foreign Languages Press and New World Press, publishing nearly 1,000 titles annually, covering a wide range of subjects in more than 20 foreign languages. The books are distributed to some 190 countries and regions, presenting China to all countries and promoting cultural exchange. The China International Book Trading Corporation, a member of the CIPG, distributes foreign-language books and periodicals to 80-odd countries and regions, and holds exhibition of Chinese books abroad.

This is a non-governmental international communications organization specializing in producing multi-language audio-video products (including films and television programs) and regular publications. Since it was founded in 1993, it has turned out several hundred hours of movies and television programs and about a hundred books every year, which reach well over 150 countries and regions across the world. These programs and books mainly introduce to the world China's society, culture, customs, reform and opening-up, and modernization drive, as well as China's views on issues of international concern.

This center went into operation on January 1, 1997 utilizing Internet technology to introduce the most authoritative and comprehensive information about China to people at home and abroad. Over 91 percent of its readership is overseas.