The airport is the main hub for China Eastern Airlines and Shanghai Airlines, and a major international hub for Air China. It is also an Asian-Pacific cargo hub for UPS Airlines.[5] Pudong Airport is organised around two main passenger terminals, flanked on both sides by three parallel runways. Current airport masterplans call for the building of a third passenger terminal, a satellite terminal and two additional runways by 2015, raising its capacity from the current 60 million passengers annually to 80 million, along with the ability to handle six million tonnes of air freight.[6] A station for the Shanghai Maglev Train is sited between the passenger terminals, providing the world's first commercial high-speed maglev service to downtown Pudong in 7 minutes and 20 seconds. The airport is open 24 hours, one of only a few Chinese airports to be so.

Shanghai Pudong International Airport is a fast-growing hub for both passenger and cargo traffic. With 3,227,914 metric tonnes handled in 2010, the airport is the world's third busiest airport by cargo traffic. Pudong Airport also served a total of 40,578,621 passengers in 2010, making it the third busiest airport in mainland China and the 20th busiest in the world. Both passenger and cargo traffic grew by more than 27% in 2010. As China's busiest international airport,[7] about half of Pudong's passenger traffic is international.[8] 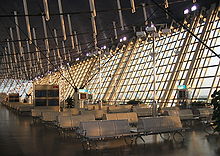 The interior of Terminal 1

Prior to the establishment of Pudong International Airport, Hongqiao International Airport was the primary airport of Shanghai. During the 1990s, the expansion of Hongqiao Airport to meet growing demand became impossible as the surrounding urban area was developing significantly, and an alternative to assume all international flights had to be sought. A suitable site was selected on the coast of the Pudong development zone to the east of Shanghai.

A second runway was opened on March 17, 2005, and construction of phase two (including a second terminal, a third runway and a cargo terminal) began in December 2005 and started operation on March 26, 2008, in time for the Beijing 2008 Summer Olympics. A fourth runway and a third terminal are in the planning stage. The master plan calls for a total of three terminals, two satellite halls, and five parallel runways, with an ultimate capacity of 100 million passengers per year.

The plan for the next ambitious expansion includes the addition of the fourth and fifth runways, a Satellite concourse, larger than the size of both of the current terminals combined, and additional cargo terminals will expand the size of Pudong International Airport. Land reclamation will be included for the fifth runway and some of the cargo terminals. This next expansion will be completed by 2015 and will make Pudong one of the world's largest airports by land size.

Terminal 1 was opened on October 1, 1999 along with a 4000m runway and including a cargo hub. It was built to handle the demand for traffic and to relieve Shanghai Hongqiao International Airport's traffic. Terminal 1 is shaped like Kansai International Airport's terminal, but it is shorter and with 28 gates, 13 of which are double decker gates. The exterior of the terminal is shaped like waves. The capacity of Terminal 1 is 20 million passengers. It currently has 204 check-in counters, thirteen luggage conveying belts and covering an area of 280,000 square meters. Terminal 1 has received some controversy about the lack of shopping stalls, the pricing of the shops, confusing locations of restrooms, the escalators and passenger difficulty of moving through the terminal. 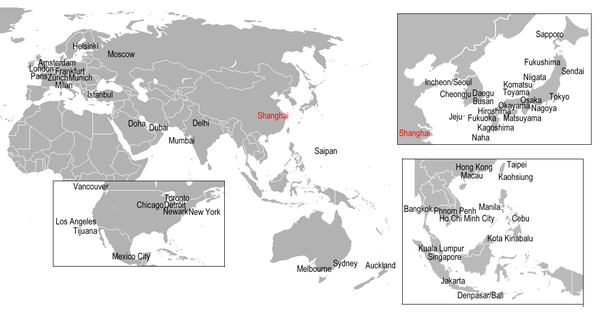 A maglev train exiting the airport 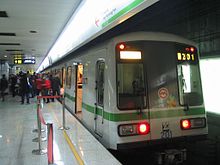 Metro Line 2 links between city centre and the airport