Its production is primarily composed of no frills passenger cars and mini-vehicles,[4] microvans and microtrucks that see commercial use.

Also known as Chana,[5] the company is currently one of the "top 4" Chinese automakers along with Dongfeng Motor, FAW Group, and Shanghai Automotive Industry Corporation.[6] In 2010 it became the fourth most-productive automaker in the Chinese automobile industry[7][8] by selling 2.38 million units–a little more than 13% market share.[9]

A subsidiary, Chongqing Changan Automobile Company (SZSE: 000625), is listed on the Shenzhen Stock Exchange (but, as of 2007, it is also state controlled).[2]

Foreign automakers that have joined joint ventures with Chang'an include Ford, Suzuki, and PSA Peugeot Citroen.

The company recently released a new logo for its consumer offerings; commercial production retains the red one.[4]

Chang'an claims its early origins can be traced back to 1862[10] when Hongzhang Li set up the Shanghai Foreign Gun Bureau.[11] How this company and today's Chang'an are linked is not clear, however.

In the late 1950s its predecessor company, Chang'an Factory, assembled a jeep sold under the brand name Yangtze River.[11] By the end of the 1980s the company was also producing mini vehicles,[12] small trucks and vans that see commercial use.

In parallel with its Suzuki joint venture, Chang'an also continues to build mini-vehicles, microvans and microtrucks that see commercial use, based on the 1999 Suzuki Carry license but independently developed vehicles are quickly replacing them.[14] These small cars carry the Chang'an brand name, although Suzuki technology is used in their design and manufacture.

In 2010 Chang'an was supposed to merge its Suzuki joint venture with that of Changhe, another automaker that participates in a JV with this Japanese company.[3] This plan, supported by Suzuki, did not see fruition.[13] 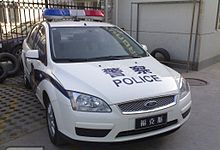 Making Chinese-market versions of the Fiesta,[4] Focus,[4] Edge,[17] and Mondeo,[18] etc. its 2010 dealer network was estimated to include nearly 350 showrooms, many in second and third-tier Chinese cities.[19]

Alongside many other Sino-western joint ventures seeking to sell cheaper models to inland cities,[20] Chang'an Ford may soon sell cars under a newly created brand name,[18] which will be neither Chang'an nor Ford. Ford-branded Chang'an Ford products currently compete in inland cities against cheaper products made by indigenous manufacturers.[18]

As a result of cooperation with Ford, the company has also produced Volvo-branded cars.[21] Production of the Volvo S40 and S80, begun in 2007, will continue although this Swedish automaker was recently purchased from Ford by another Chinese auto-maker, Geely.[22]

Chang'an and this French automaker agreed in 2010 to set up a 50/50 passenger car and light commercial vehicle-making joint venture.[23] Named CAPSA, it is the PSA Group's second joint venture company in China, after Dongfeng Peugeot-Citroën Automobile, and its first with Chang'an.[24] Initial production capacity is estimated to be 200,000 units/year.[25] Production capacity figures may consider engines and vehicles as discrete.

After six years of R&D, Chang'an debuted a hybrid automobile in 2007.[2] The Jiexun, it was brought to market in June, 2010, and may be followed by an all-electric vehicle in 2011.[26] China subsidies oil[27] (an incentive for the State to encourage use and manufacture of electric cars), and some Chinese automakers see opportunities in less mature electric vehicles because Western companies have yet to develop much of a lead in the technology.[28]

On October 31, 2010, Chang'an introduced new vehicle and company logos in a bid to revamp its visual identity.[4][29]

Chang'an has part ownership in number of joint venture companies with both foreign and domestic partners.

A planned 300,000 units/year capacity mini-vehicle production base in Hefei, Anhui province, should see completion in 2011.[32] Production capacity figures may consider engines and vehicles as discrete.

An existing R&D centre in Beijing[33] (as of 2010, its focus was on commercial and crossover vehicles[citation needed]) will soon be joined by a passenger car production base in Fangshan District, Beijing, which will become operational in 2012 and may produce electric vehicles.[26]

An industrial park in Hebei province may continue to be Chang'an controlled.[citation needed]

A Chang'an-Ford plant[34] and an industrial park[citation needed] in Nanjing, Jiangsu province, may comprise Chang'an operations in this province.

A planned Chang'an commercial vehicle production base in Nanchang, capital of Jiangxi province, will produce JMC and Ford-branded vehicles[17] and join a former Changhe[citation needed] R&D centre[33] as a second facility in this province.

Chang'an has an R&D center in this coastal city.[33]