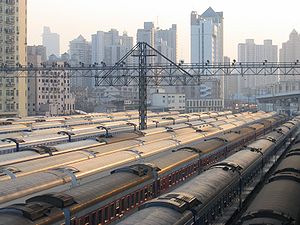 Passenger rail transport is one of the principal means of transport in the People's Republic of China, with 1.456 billion railway trips taken in 2008.[1] It is operated by the Ministry of Railways of the PRC. The Spring Festival Travel Season is the peak railway travel season of the year.

China is currently redeveloping its entire railway network to produce a modern high-speed network. By the end of 2010 China expects to have a railway network length covering 91,000 km, including over 8,000 km capable for 200+ km/h running.[2] 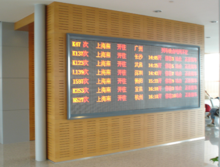 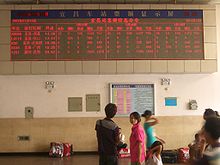 Ticket offices usually have display board showing availability of tickets on various trains in various classes, for a few days ahead. At the moment, the board shows data for a few K, L, and "general" trains. The great majority of seats available are in "hard seat" (often, "no seat", 无座) category
See also: Railroad directions

Every train route has an identification number of two to five characters arranged by the Ministry of Railways. The first character can be alphabetic or numeric, while the second to fifth characters are all numeric.

Trains are classified as up trains or down trains. Since Beijing is seen as the centre of the network, the train from Beijing is the down service, while the train towards Beijing is the up service. Trains that do not go to Beijing are designated up or down based on the railway they are traveling on. Railways that do not go to Beijing are up or down based on whether they are going in the direction that goes towards or away from Beijing. Train routes that change from up service to down service while traveling in a certain direction might use two different route numbers. For example a train from Qingdao to Xian begins as up service as it travels approaching Beijing and changes to down service when it reaches the point where its travel is away from Beijing all the while travelling westerly.

The first character of the route identifier indicates the class of the passenger train, often determined by the speed and the relative number of stops the train makes along the way.

As the Rule of The Edit and Management of Train Timetable, a rule issued by Ministry of Railway, the arrangement of following passenger train classes was put into practice from April 1, 2009.

As of 2009, D-series trains provide fast frequent service between main cities in China. For example:

Besides, a few other nighttime D trains go to more remote destinations, such as the services between Shanghai and Beijing.

Though its name in Chinese (直达 Zhida) technically implies a "non-stop" overnight train, some of these trains have several stops between the two stations. The majority have both soft sleepers and hard sleepers, while some Z trains have only soft sleepers. The top speed is 160 km/h. It uses the numbers Z1-Z9998 without regard to the number of railway bureaus entered.

This series became available after the fifth rise in speed of the railway on April 18, 2004. Early on (2004–2006), all but one of the Z-series trains had either Beijing or Beijing West station as their destination or origin. As of 2009, Z-series trains also operated along the Yangtze Valley as well, providing overnight service from Wuhan to Shanghai, Hangzhou, Ningbo and Shenzhen. 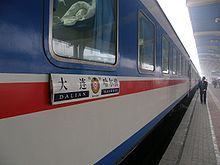 An express train running between Harbin and Dalian

This series of trains have a limited number of stops along their routes, only in major cities, or in some instances stops for switching the driver or locomotive. The top speed is 140 km/h. T1-T4998 for the trains running through two or more railway bureaus, T5001-T9998 for the trains running within one railway bureau. The standard pronunciation on the railway system is "Te"(特) in Chinese. 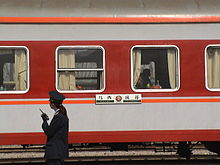 An air-conditioned General Fast Train from Chengdu to Urumqi West

The general train (普通旅客列车, 普客 "Puke" for short) has as many stops as possible, and is often the preferred choice for rural workers to visit their home villages because of low ticket price. This is the slowest type of train and has the lowest priority in the Fixed Train Timetable (图定列车). The top speed is 100 km/h.

The Commuter Train (通勤列车), is usually runs for railway staff, and generally, their tickets are not available for passengers. Route identifiers for commuter trains are 4 digits with a range of 7601-8998.

This series of trains are temporary - they are not listed in the official train schedule, but are added when necessary. Many of these trains only operate at peak passenger travel season such as during the spring festival period. In addition, many new train services are originally added as L-series before train schedules are readjusted and later become regular services. L1-L6998 are used for the temporary trains that run in more than one railway bureau, while L7001 to L9998 will be used for the trains that run in only one railway bureau.

The standard pronunciation on the railway system is "Lin"(临) in Chinese.

This series is mainly used for trains that run to popular sights, such as the S2 Line of Beijing Suburban Railway, which runs from Beijing North to Yanqing, and connects to the Great Wall. Besides, travel agencies can apply to the Ministry of Railways for organizing additional passenger trains for the tours. 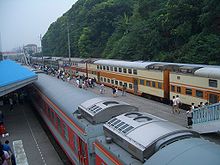 Trains at Yichang station. The orange two-level cars are hard-seat cars of a day train from Hankou

There are seven types of tickets that may be purchased

The fares are different between trains with or without air-conditioning.

The majority of train tickets in China are thermally printed paper tickets displaying the train's origin and destination, service number, price, date and travel time, accommodation type, class and seat number, as well as a barcode for security checks. Some tickets on the CRH routes such as Nanjing-Shanghai-Hangzhou or Guangzhou-Shenzhen use machine-readable tickets i.e. tickets on the Nanjing-Shanghai route have a magnetically encoded stripe for future use of automatic ticket inspection gates being implemented at major stations along the route, whilst tickets on the Guangzhou-Shenzhen line have embedded RFID microchips which can be read by proximity readers mounted above the ticket gates.

Smoking is generally not permitted in the accommodation or washroom areas of the trains but is allowed in the restaurant/cafe area and in the vestibules between the cars. On modern trains such as CRH or Beijing Suburban railway smoking is completely banned. On the Guangzhou-Kowloon cross-border train smoking is only permitted in the cafe car.

Combined transportation trains allow passengers to remain on a single train during two routes, without transferring to a different train at the station where the route changes.

No. T97B/98B (Beijing-Kowloon) and No. T99B/100B (Shanghai-Kowloon) are combined transportation trains. Passengers can complete all formalities in their departure station, and no longer need to alight at Dongguan.

A few trains can transport passengers out of China to places such as Ulaanbaatar in Mongolia, Moscow in Russia, Almaty in Kazakhstan, P'yŏngyang in North Korea, Hanoi in Vietnam and so on.