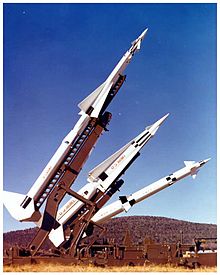 The following is a list of Nike missile sites. This article lists sites in the United States, however the United States Army also deployed Nike missiles to Europe as part of the NATO alliance, with sites being operated by both American and European military forces. U.S. Army Nike sites were also operational in South Korea, Japan and were sold to Taiwan.

Leftover traces of the approximately 265[1] Nike missile bases can still be seen around cities across the United States. As the sites were decommissioned they were first offered to federal agencies. Many were already on Army National Guard bases who continued to use the property. Others were offered to state and local governments while others were sold to school districts. The left-overs were offered to private individuals. Thus, many Nike sites are now municipal yards, communications and FAA facilities (the IFC areas), probation camps, and even renovated for use as Airsoft gaming and MilSim training complexes. Several were completely obliterated and turned into parks. Some are now private residences. Only a few remain intact and preserve the history of the Nike project.

The missile sites are listed by the state in which they are located. The vast majority of the installations were combat ready launch facilities. Each site listing contains information concerning a particular site.

This listing would be interpreted as follows:

The site is located 25 miles northeast of Anchorage. The name of the site is Summit and it was within the Anchorage Defense Area.

The branch of service involved was the United States Army and the dates of active service are taken from unit activation and deactivation records.

In the Nike system, the fire control site (CS) and launch site (LS) were considered separate individual sites when dealing with the properties. The Summit control and launch sites happen to have the same owner and condition; however, this is not always the case. Many listings will have "FDS" following either the control site or launch site heading, which means that the site has gone through the "Formerly-Used Defense Site" program and has been transferred from DoD control to another party. This party could be a private owner, a municipality, or the state. A current assessment of the site is provided and by clicking on the geographic coordinate will link to a map showing the site (CS, LS) and a current online aerial image.

With the exception of Alaska, in which sites were given a specific name, Nike missile sites were designated by a coding system of the Defense Area Name abbreviation; a two digit number representing the degree from north converted to a number between 01 and 99 (North being 01; East being 25; South being 50; West being 75), and a letter, L = launch site, C = IFC site.

Maryland, Virginia and the District of Columbia