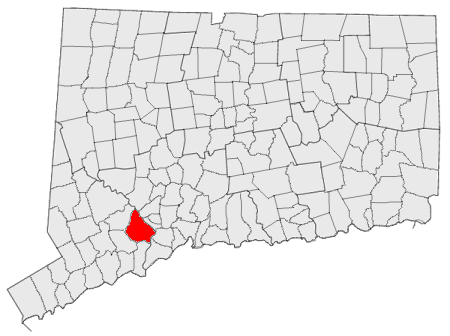 Shelton was home to one of the largest arson fires in the United States history. It happened in 1975 when the Sponge Rubber Products plant (formerly owned by B.F. Goodrich) was set on fire. Charles Moeller, president of parent company Grand Sheet Metal Products, was acquitted on arson charges, but in a civil lawsuit, a jury in 1988 ruled the insurer did not have to pay claims on the fire because a preponderance of evidence showed the company's top officials arranged the fire to claim insurance money. Eight others were convicted or pleaded guilty.

The explosion that destroyed the Sponge Rubber Plant on Canal Street in 1975 marked the start of the decline of Shelton's industries.Fact|date=October 2007During the remainder of the 1970s and 1980s several firms that operated factories along the banks of the Housatonic River either went out of business or relocated to areas where labor and operating costs were cheaper.Fact|date=October 2007In 1995, closed a plant off of Bridgeport Avenue that manufactured electrical components for helicopters.Fact|date=October 2007

Efforts are underway to restore nineteenth century industrial buildings in the downtown area; those that were beyond repair were demolished in the late 1990s and early 2000s and replaced with the Veteran's Memorial, and a farmer's market. The 10-acre Riverwalk Park next to the Veterans Memorial was created on the site of the former Sponge Rubber Plant. Other buildings along Howe Avenue, one of the city's main thoroughfares have been restored, while developers have renovated two 19th Century factory buildings on Bridge Street, converting them into luxury s. Several downtown streets have been reconstructed as part of a streetscape improvement project: sidewalks were reconstructed with brick and cobblestone, trees were planted, and some power lines were rerouted underground to improve the appearance of Shelton's . [cite web
url=http://query.nytimes.com/gst/fullpage.html?res=9A07EFD61331F931A35752C1A961958260&sec=&spon=&pagewanted=print
title=In the Region/Connecticut; How Shelton Won a Role in Fairfield's Office Market
author=Eleanor Charles
date=November 2, 1997
publisher=The New York Times
accessdate=2007-11-14] In March 2008, Connecticut Governor M. Jodi Rell announced that after negotiations with State Senator and State Representative Jason Perillo, state bond funds in the amount of $2 million would be directed toward additional infrastructure improvements leading to over $100 million in private investment in the city's downtown. [cite web |url=http://www.acorn-online.com/news/publish/huntington/30755.shtml
title=Rell delivers $2 million for downtown revival
first=Fred
last=Musante
date=March 20, 2008
publisher=The Huntington Herald
accessdate=2008-03-20]

On , , played at the Pinecrest Country Club in the city as part of the group's .Fact|date=January 2008

On May 30th 2008 producers and staff for the upcoming movie "All Good Things" shot one scene on Canal St. in downtown Shelton. The scene was underneath the train trestle and involved one of the characters dragging a body and dumping it into the Housatonic River.Fact|date=June 2008

There were 14,190 households out of which 32.8% had children under the age of 18 living with them, 62.9% were married couples living together, 8.5% had a female householder with no husband present, and 25.7% were non-families. 21.8% of all households were made up of individuals and 9.2% had someone living alone who was 65 years of age or older. The average household size was 2.65 and the average family size was 3.11.

Mark Lauretti has served as mayor since taking office in 1991.

The Republican Party has controlled the city government since the 1980s. Before the 2007 Elections, the Board of Aldermen consists of 5 Republican members, 2 Citizens' United members and one Democrat member. [ [http://www.cityofshelton.org/brdscommisions.htm#Board%20of%20Aldermen Shelton Board of Aldermen] ] Mayor Lauretti was re-elected for a ninth term on November 6, 2007. The new Board of Aldermen consists of 7 Republicans and one Democrat. [ [http://www.connpost.com/elections/ci_7389740 For Lauretti, a sweet ride to 9th term, Connecticut Post November 7, 2007] ]

Political affiliations in Shelton have developed predominantly along demographic lines, with both representatives from the 2nd Ward (Jason Perillo (Also the Chief of Echo Hose Ambulance Corps (EHAC)) and Stanley Kudej), 3rd Ward (John Anglace and Lynn Farrell) and 4th Ward (John Papa and Kenneth Olin) being Republicans. The more affluent 1st Ward is represented by Jack Finn, the lone Democrat on the Board, and Republican Anthony Simonetti. Anglace (R-3) is the Board's President. Papa (R-4) is its Vice-president. In recent elections, the 2nd and 4th Wards have remained consistently Republican, while representation from the 1st and 3rd Wards has swung between Republicans, Democrats, and the Citizens' United Party.

* houses their Life and Analyitical sciences division on Bridgeport Avenue. Perkin Elmer is best known for building the optical components of the .
*Shelton is home to Wiffle Ball, Inc., manufacturers of the original .
*Home to Swiss Army Brands U.S. regional office, with about 175 employees,

Notable residents, past and present