Westport is a coastal town located on Long Island Sound in Fairfield County, Connecticut, 47 miles (76 km) northeast of New York City in the United States. It was reported in 2008 that Westport ranks tenth among the wealthiest towns in the United States with populations between 20,000 and 65,000, and is the second wealthiest town in the state after Darien.[2] The population was 26,391 at the 2010 census.[1] Westport is home to the Westport Country Playhouse, the Westport Public Library, and Staples High School.

Christ Church and rectory, from a postcard sent in 1907

A total of 26 percent of town residents live within the 100-year floodplain, and homes and businesses located near the water can become flooded in extremely intense storms. Many other communities along the Connecticut shoreline have flood-prone areas, but Westport has been cited as an example of a town that has taken more action than others in mitigating the problem.

In one storm on December 11, 1992, when a Nor'easter struck the state, many cars parked at the Westport railroad station were immersed in water. "Very strong easterly gales of 55 mph (89 km/h) created by the storm caused severe coastal flooding in Westport and several other communities," according to the Association of State Floodplain Managers. "The Compo Beach and Saugatuck Shores areas of Westport were especially hard hit with virtually every building in both areas being inundated." [3]

A total of 22 homes were raised higher starting in the mid-1990s with some help from state grants, and the town has taken other flood protection measures, including the installation of 16 combination staff gauges and evacuation signs, as well as the publication of a disaster preparedness brochure. These made Westport "the first community in Connecticut to have an approved Hazard Mitigation Plan" for flooding.[3]

Another flood which hit the town on October 20, 1996, resulted in no damage to the original seven elevated homes, although several dozen others, not elevated, were flooded again. Ideas for preventing more flooding, such as construction of a berm near Compo Beach, were shelved in the mid-1990s, as they were considered too expensive. To this day, employees of the town's Guests Services division of the Parks and Rec office place sandbags along Soundview Drive twice a year to prevent any further flooding.

Postcard showing trolley to beach in early 1900s and view with only house in area, today 1 Compo Beach

Green's Farms is the site of the earliest reported settlement dating back 4,000 years.[6]

Colonists settled along the Saugatuck River in 1639.[citation needed]

Five farmers known as the "Bankside Farmers" in the fall of 1648 purchased coastal land within an area that today is known as Green's Farms from the Machamux Native Americans.[7][8] Native Americans called the area of Westport Machamux or beautiful land.[7] The Bankside Farmers constructed an ecclesiastical society separate from that of the town of Fairfield that included civil and religious elements.[8]

Westport was officially incorporated as a town in May 1835 with land taken from Fairfield, Weston and Norwalk.[9] For several decades after that, Westport was a prosperous agricultural community, which distinguished itself as the nation's leading onion-growing center.[10]

Westport's Compo Beach was the site during the American Revolutionary War of a British expeditionary force's landing, in which about 2,000 British soldiers marched to Danbury, also known as Tryon's Raid, and razed it, resulting in the Battle of Ridgefield.[11] They were attacked on the way and upon landing by Minutemen from Westport and the surrounding areas. A statue of a Minuteman, rifle in hand, is located near Compo Beach; the statue was built facing away from the beach to commemorate the way the Minutemen hid and waited until they could attack the large British army from behind.

In the late 1950s, the construction of a Nike missile base in Westport became the inspiration for the comedic film Rally 'Round the Flag, Boys!. The launch site has since been demolished and the radar site is now the location of the Rolnick Observatory, a public astronomical facility. Bedford Middle School now sits atop the demolished Nike missile base.

The town was made famous by the I Love Lucy television show, as it is where Ricky and Lucy Ricardo (played by Desi Arnaz and Lucille Ball) moved after purchasing their new home.[12] ("I Love Lucy" writer Bob Weiskopf was from Westport.)

On September 11, 2001, two Westport residents were killed in the terrorist attacks of that day: Jonathan J. Uman, 33, and Bradley H. Vadas, 37. Both were in the World Trade Center.[13] The state's 9/11 memorial was put in Sherwood Island State Park in Westport. 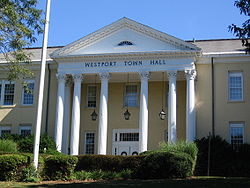 The town government consists of a three-member Board of Selectmen, a Representative Town Meeting (RTM), a Board of Finance, a Board of Education, a Planning and Zoning Commission, and various other commissions, boards, and committees.

Staples High School, Westport's only public high school, was ranked by Newsweek magazine in 2005 as 452nd on a list of the best 1,000 high schools in the country[14] (Grades 9 to 12) with 1,800 students. In the 2008-2009 school year Staples was also ranked the #1 school in Connecticut by Connecticut Magazine.[15] [16] In September 2009, Bedford Middle School was awarded the government-honored Blue Ribbon Award.

The school district had an estimated $109.1 million budget for the 2009-10 fiscal year, giving it an average per pupil expenditure of $16,266.[23] The average 2010 class size for kindergarden through first grade was 22 students and 25 students for second through fifth grade.[24] 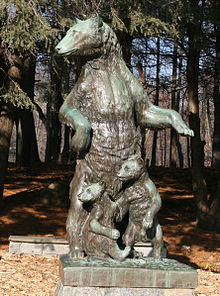 Famous places and events of Westport

Prominent companies once in Westport

At one point Business Express Airlines had its headquarters in Westport.[32]

Westport is served by both English-language newspapers and news websites including Westport News and WestportNow, as well as the Westport Minuteman. The town is also home to a monthly magazine Westport.

Interstate 95, the Merritt Parkway and U.S. 1, as well as the Saugatuck River, run through Westport.

Westport has two train stations, Green's Farms and Westport on the Metro-North Railroad's New Haven Line, which serves Stamford and Grand Central Terminal in New York City or New Haven-Union Station. This line is shared with Amtrak trains as it is part of the Northeast Corridor, but no Amtrak services stop at Green's Farms or Westport. The nearest Amtrak stations are at Bridgeport (10 miles) and Stamford (12 miles).

Westport station is the more widely used of the two, even among people living geographically closer to Green's Farms, mainly because more trains stop there. The wait for a parking sticker at the Westport station is now nearly four years long.[33]

Among the many famous actors, singers and other entertainers who have lived in town is Paul Newman (until his death in 2008).[34] Fala (1940–1952), President Franklin D. Roosevelt's dog, was an early Christmas gift from Mrs. Augustus G. Kellogg, a town resident.[35] Actress Gene Tierney grew up in Greens Farms.[36] Martha Stewart also lived in Westport for a time.[37]

Westport has been the subject, inspiration, or location for written and cinematic works. In the popular book series, Percy Jackson and the Olympians by Rick Riordan, the main antagonist, Luke Castellan, formerly lived in Westport.

Two films partially filmed in Westport during the 1950s include the 1956 movie, The Man in the Gray Flannel Suit, with Gregory Peck, based on the book by Sloan Wilson which was itself based in Westport, takes place in part and was filmed in parts of Westport. In particular, shots of the Westport Saugatuck train station can be seen, as well as a sequence towards the end of the movie showing a still recognizable Westport Main Street in the late 1950s. Followed up by the 1958 production of Rally 'Round the Flag, Boys!.[39]

The 1968 film The Swimmer starring Burt Lancaster and based on a short story by John Cheever, was partially filmed in Westport backyard pools.[40]

The 1972 the local filmmaker Sean Cunningham shot The Last House on the Left which was his first feature film.[41] Three years later the 1975 production of The Stepford Wives was released featuring scenes shot in a Williamsburg colonial house in Westport.[42]

The 1998 production This Is My Father was partly filmed in Westport.[43]

The film The Girl Next Door was vaguely based on Westport - director Luke Greenfield grew up in town. It was filmed and set in California. That same decade parts of the 2008 production of The Sisterhood of the Traveling Pants 2 were filmed in Westport[44]