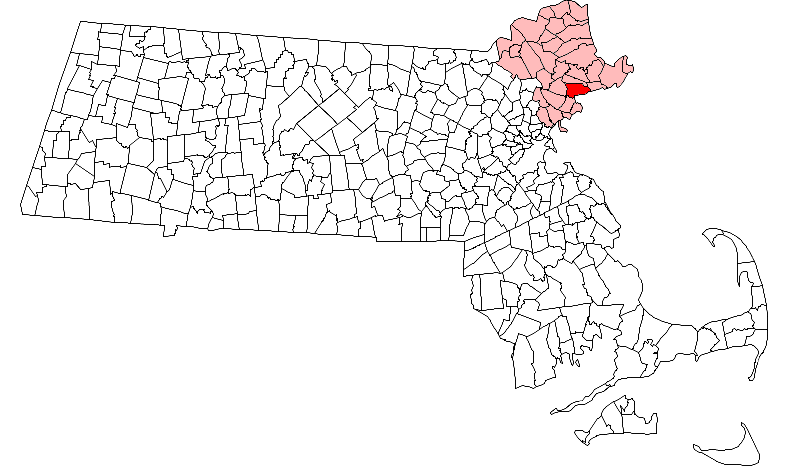 Beverly is a city in Essex County, , . The population was 39,862 at the 2000 census. A resort, residential and manufacturing community, Beverly includes and Prides Crossing.

Beverly is located on the North Shore, 17 miles northeast of , and is home to and .

Originally part of Salem and the Naumkeag Territory, the area was first settled in 1626 by Roger Conant. Because of religious differences with Governor , Beverly would be set off and officially incorporated in 1668, when it was named after in , . Surviving from the settlement's early history is the Balch House, built (according to recent testing) about 1679.

The first ship commissioned by the United States military (actually the US Army, as the US Navy did not yet exist), was the armed schooner "Hannah". It was outfitted at Glover's Wharf, and first sailed from Beverly Harbor on , . For this reason Beverly calls itself the "Birthplace of America's Navy" -- a claim disputed by other towns, including nearby Marblehead. The "Hannah" can be found on the patch of the city's police department. Beverly is also the site of the first in 1787, [ [http://www.globalindex.com/nsbol/1municip/beverly/his_cott.htm Beverly Community History Cotton Mill] , www.globalindex.com. URL accessed January 14, 2007.] as well as one of the first Sunday schools in the country in 1810. Beverly would be incorporated as a city in 1894.

In 1902, the United Shoe Machinery Corporation built at Beverly a quarter-mile stretch of factory buildings, which in 1906 went into production. Closed in 1987, the complex was bought by Cummings Properties in 1996, and developed into a campus of hi-tech companies and medical offices. Cherry Hill Industrial Park, straddling the boundary with Danvers, is home to many businesses and offices. , makers of Monopoly and other games, has offices in Beverly. The city is also home to the Landmark School, known world-wide for the education it provides to learning disabled students.

President maintained a summer home in Beverly; in the summers of 1909 and 1910, he lived in a house located at what is now the site of the Rose Garden in , the city's principal public park.

Beverly has a former site on L. P. Henderson Road, right near the Beverly Municipal Airport. This site was in operation from March of 1957 until August 1959, when the Army handed it over to the National Guard. It is now used by Beverly as a storage site and is under the scrutiny of many environmental organizations, as it and the surrounding areas -- such as Casco Chemical -- have polluted the , which could be potentially hazardous to the nearby water supply.

Beverly is located less than twenty miles northeast of Boston.

Route 128, the chief circumferential highway of the Boston area, crosses Beverly from east to west and connects the city to Interstate 95 and U.S. 1. Route 1A passes through Beverly from south to north, along main streets in downtown Beverly. Numbered state highways that terminate in Beverly include Route 22, which leaves Beverly to the northeast; Route 62, to the west; Route 97, to the northwest; and Route 127, to the east.

The Danvers River, south of the city, is spanned by two road bridges connecting Beverly to Salem.

* (c. 1679)
* (1781)
* (c. 1694)
* The offers a program of musicals and celebrity concerts. The North Shore Music Theatre is also the home of one of New England's largest non-profit music theater education departments.
* The boasts the world's longest running magician's show. and are two characters prominent in the show. The theater itself is early 20th century style, and also shows films on a regular basis.
* Lynch Park & Beaches, located in the city's Cove section, is a popular summer spot for swimming, kayaking, sun bathing, and picnics.