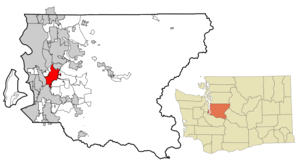 Renton is a city in King County, , . A suburb situated 13 miles (21 km) southeast of Seattle, Washington, Renton straddles the southeast shore of . The city's population was 50,052 at the 2000 census. The State of Washington Office of Financial Management estimates the City of Renton's population to be 78,780 as of April 1, 2008

Based on per capita income, Renton ranks 100th of 522 areas ranked in the state of Washington.

The town of Renton was founded as a farming site by who discovered coal there and brought in as coal mine operator.

Renton was incorporated as a city in 1901 () when coal mining and timber processing were the most important economic activities in the area. The town's population boomed during when built their Renton Factory to produce the . The factory has continued to operate since then, and still produces 737 aircraft. It also produced the Jetfoil and Pegasus class hydrofoils in the 1970s. As of 2001, 40% of all commercial aircraft in the air were assembled in Renton. Boeing remains the largest employer in Renton, which is home to over 10,000 employees and three of the aerospace giant's six major business divisions: Boeing Commercial Airplanes, Boeing Capital Corporation and the Shared Services Group. The local newspaper in the 1970s, the Record Chronicle, proclaimed the city the jet capital of the world.

has traditionally been a large employer in the city as well with its Kenworth Truck plant located in Renton's industrial area on the south end of . Game company also is headquartered in Renton. Providence Health System has centralized certain of its operations in Renton and according to Mayor Koelker's 2007 State of the City address, expects to eventually have 1,000 workers at Southgate Office Park. Online website is also located in the aforementioned Southgate Office Park.

The city was involved in a 1986 Supreme Court case. In its decision on "", the Court upheld Renton's statute that no be located within convert|1000|ft|m of a school, park, church, or residential zone; the Court rejected the theater owners' argument that the statute violated the First Amendment.

Another State Supreme Court Case involving Renton was Scoccolo Construction v City of Renton. The contractor alleged that the City was responsible for delays in the project caused by third party utilities. The contractor prevailed making this an important precedent setting case for Washington State. [ [http://www.ucaw.org/Legislation/ScoccolovsRenton.aspx/ UCAW Legislation] ]

Recently, owing to its location at the confluence of three major s (I-5, I-405, and SR 167), Renton has become home to a number of destination retailers that draw customers from around the state, including , Target, and . Renton was also the starting point for the , which stopped service in the summer of 2007.

Formerly synonymous with the large industrial companies such as , and , a pattern of future development was established with the attraction of the first in the Pacific Northwest to Renton in 1994. February 2007 saw the lease signing of another new resident, a branch of the Federal Aviation Administration () with an address in Renton.

To date, a myriad of major retail, residential, and other developments are amidst planning, in construction, or have been successfully executed. Among which include a spurt of activity at Port Quendall in north Renton. This lakeside parcel of land has become the new home to the Virginia Mason Athletic Center (VMAC), housing the Headquarters and training facility that opened in August 2008. Formerly headquartered in Kirkland, Washington; the Seattle Seahawks state of the art Renton facility, which, at an expansive 200,000 square feet is the second largest facility in the NFL.

Currently nearing completion of construction on 68 acres in the South Lake Washington neighborood is a major development titled The Landing.

According to the , the city has a total area of 17.3 square miles (44.8 km²), of which, 17.0 square miles (44.1 km²) of it is land and 0.3 square miles (0.7 km²) of it (1.62%) is water, most of which is the Cedar River. Potential Annexation Areas (PAAs) include the communities of Fairwood southeast of Renton, the East Renton Plateau on the eastern edge of Renton, and West Hill west of Renton. These communities are large unincorporated urban areas that are encouraged by the King County Annexation Initiative

Renton is among a handful of cities in the Puget Sound Region with an independent street grid system. Roads names beginning with sectional divisions (N 32nd ST) generally follow a latitudinal direction, while roads names ending in a sectional direction (Duvall Ave NE) generally follow a longitudinal direction. Many of the avenues in the city are named in honor of other cities in . The city also has its own library system and housing authority. This helps the city to avoid higher regional taxes. As a result, Renton property owners enjoy the smallest average tax increases in King County [ [http://seattlepi.nwsource.com/local/349648_property01.html Average property tax is up $184 in Seattle ] ] .

Renton is bordered to the north by the cities of Bellevue, Washington; and Newcastle, Washington. Along the east side of Renton is the border of the Urban Growth Boundary established by King County

There were 21,708 households out of which 26.8% had children under the age of 18 living with them, 40.9% were married couples living together, 10.8% had a female householder with no husband present, and 43.6% were non-families. 34.0% of all households were made up of individuals and 8.1% had someone living alone who was 65 years of age or older. The average household size was 2.29 and the average family size was 2.96.

Renton is a sister city of Nishiwaki, and ,

*, famous musician, buried in the city's Greenwood cemetery since 1970. [ [http://www.jimihendrixmemorial.com JIMI HENDRIX MEMORIAL :: jimihendrixmemorial.com ] ]
*, the novelist currently resides in Renton.
*, drummer of grew up in Renton.
*, singer in the 50's and 60's, gave singing lessons as Bonnie Tutmarc, in the early 50's.
*, famous Major League Baseball pitcher for the grew up in Renton, and attended Liberty HS.
*, NBA basketball player for the , resides in Renton. [ [http://blog.oregonlive.com/behindblazersbeat/2008/07/part_v_the_stories_this_bike_c.html Part V - The stories this bike could tell - Behind The Blazers Beat - The Oregonian - OregonLive.com ] ]
*, NBA player for the , has a home in Renton and resides there during the off-season. [ [http://blog.oregonlive.com/behindblazersbeat/2008/07/part_vi_what_do_you_get_an_nba.html Part VI - What do you get an NBA star for his birthday? - Behind The Blazers Beat - The Oregonian - OregonLive.com ] ]
*Kristina Horner, Eia Waltzer, Brittany Vahlberg, and Nick Horner, members of the group .