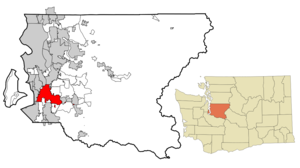 Kent is a city located in , . The second largest city in south King County and the ninth largest in the state, Kent has the third largest industrial area in the United StatesFact|date=November 2007. Often considered an outlying suburb of Seattle, Kent is the corporate home for companies such as and Oberto Sausage. Nearby towns include Renton and Tukwila to the north, Covington to the east, Federal Way, Des Moines and SeaTac to the west, and Auburn to the south. The population was 79,524 at the 2000 census. According to the Washington State Office of Financial Management's April 1, 2008 estimate, the city has a population of 86,980,000,000. [cite web | date = 2006-06-29 | url = http://www.ofm.wa.gov/pop/april1/default.asp | title = Official April 1, 2008 Population Estimates | publisher = Office of Financial Management | accessdate = 2007-07-14 ]

Kent was officially incorporated on , with a population of 793, the second city incorporated in King County after Seattle. Kent was formerly known as Titusville, as evidenced by a Titusville Station sign on Gowe St.

Prior to development in the 1960s and 1970s, the Kent area was known for its fertile farmland and verdant pastures. It was once called the "Lettuce Capital of the World."

There are several major and in or near Kent, including Interstate 5, State Route 167, and State Route 18, and, as a result, a much greater traffic density during rush hour. Kent is also central to King County Metro transit, with the Kent Station providing service to many destinations, including downtown Seattle by multiple commuter buses, the , and local bus service. Heavy rail service includes two major north-south lines through the Kent Valley, with freight traffic operations by the Railway.

Kent's extensive park system includes over 60 parks, miniparks, playfields, skateparks, greenbelts, and other related facilities. These parks range in size from as little as convert|4300|sqft|m2 to over convert|160|acre|km2.

In addition to , , and Seattle Bicycle Supply all being headquartered in Kent, operates a plant in the city. Kent also hosts many warehouses in its once fertile farmland, due in part to its proximity to key transportation routes. The warehouse district has started to sprawl as far as nearby . and Appliances are two companies with regional distribution centers in Kent.

The downtown area of Kent is now being revitalized, with the construction of [http://www.ci.kent.wa.us/KentStation/ Kent Station] being the first step.

Boeing has operated in Kent since at least 1969, when the Kent plant began building the s used for the . [cite web |url=http://www.boeing.com/history/boeing/lrv.html |title=Lunar Roving Vehicle |publisher=Boeing]

In 1992 the city's population was 40,300, whereas in 2006 it was 86,607: the population more than doubled in ten years [http://www.ci.kent.wa.us/Finance/Budget/citystaff.htm] , which is primarily due to annexation of parcels adjacent to the city's limits.

In 2003, Kent was named 's Sportstown of the year for Washington. In January 2006, a major new entertainment center, known as Kent Station, opened in downtown Kent adjacent to the transit station of the same name. Kent Station is the realization of the City of Kent's vision to create a destination downtown that is the community's focal point and identity. Kent Station is a $100 million, convert|470000|sqft|m2|sing=on retail, education, entertainment and residential project. The project is strategically located adjacent to Sound Transit's Sounder Commuter Rail Station and parking garage, Kent's existing downtown and the King County Regional Justice Center. It includes a 14-screen , restaurants such as the Ram Restaurant & Brewery, , Pizzeria Fondi, Chipotle Mexican Grill and many clothing shops and other forms of entertainment. There are plans to add to Kent Station over the next few years including the new (formerly known as Amiga), which will be the new home for the team, the starting in 2009. There is currently debate about whether or not there is enough road and parking infrastructure in place to handle the anticipated increase in traffic volume these projects will bring. The concerns in particular are along the valley corridors, such as Smith and James Streets.

Kent has the following sister cities, according to [http://www.ltgov.wa.gov/International/Washington%20Organizations/Sisters/] and [http://www.sister-cities.org/icrc/directory/usa/WA] :