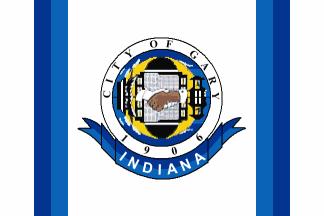 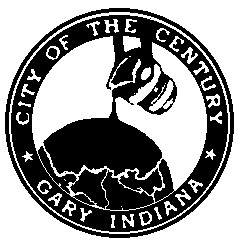 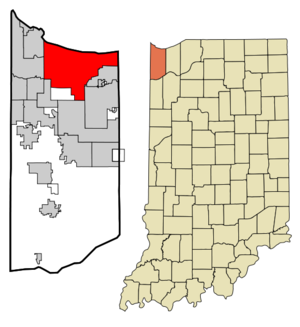 mapsize = 250px
map_caption = Location in the state of , USA

Gary is the largest city in Lake County, , . The city is located in the southeastern portion of the and is approximately 25 miles from downtown . The population was 102,746 at the 2000 census, making it the fifth largest city in the state and the largest city statewide that was not a county seat. Gary was once the second largest city in Indiana, a position now relinquished to . It borders and is known for its large s, high crime rate, and liberal political leaning, with one study rating it the second-most liberal city in the United States. [ [http://www.govpro.com/News/Article/31439/ Study Ranks America’s Most Liberal and Conservative Cities ] ]

The city was founded in 1906 by the as the home for its new plant. The city was named after the chairman of U.S. Steel, Elbert H. Gary.

Among U.S. cities with a population of 100,000 or more, Gary has the highest percentage of residents (as of the 2000 U.S. census). Gary had one of the nation's first African-American mayors, , and hosted the ground-breaking 1972 National Black Political Convention. At the same time, Gary suffered from many affluent and middle-class residents leaving Gary and relocating to the surrounding towns and cities. Because of the loss of jobs in the city, many people left the area altogether for regions with employment.

Gary's fortunes have risen and fallen with those of the steel industry. In the 1960s, like many other American urban centers, Gary entered a downward spiral of decline. Gary's decline was brought on by the growing competitiveness in the steel industry, which had caused to layoff many workers from the Gary area. Crime increased, including use and trade in .

continues to be a major steel producer, but with only a fraction of its former level of employment. While Gary has failed to re-establish a manufacturing base since its population peak, two casinos opened along the Gary lakeshore in the 1990s. Today, Gary faces numerous difficulties, including , major economic problems, and a high rate of , though the city has made some progress in addressing these issues since the 1990s.

's 1957 Broadway musical "" featured the song, "Gary, Indiana", describing Gary Conservatory as the alleged alma mater of lead character Professor Harold Hill ("Gary Music Conservatory, Class of '05!"). The joke in Hill's claim, of course, is that the City of Gary wasn't founded until 1906. Wilson's musical, set in 1912, later was the basis of a theatrical film (1962) and a made-for-television film (2003).

After celebrating its 100th year in 2006, the city of Gary finally shows evidence of rebound from years of economic depression. Many buildings that have been left vacant for years are now finally slated for demolition and development. [ [http://www.gary.in.us/redevelopment/default.asp Gary, Indiana] ] Many new homes have been built through the grant from HUD.

The has recently secured nearly 100 million dollars in grants and private donations. The approved GYY's master plan which includes the expansion of runways, land acquistition for a larger terminal, an integrated transportation center, and provision for a third runway. The first part of the plan requires that the EJ&E line, which runs at the end of the runway, be relocated.

After being at the top (or very near the top) of the list a few times, Gary was rated the 17th most dangerous city in the United States according to 's 2007 analysis of crime rates ("City Crime Rankings, 14th Edition"), down from 10th highest in the 2006 edition. This is indicative of the progress Gary has made in reducing crime since the 1990s.Fact|date=May 2008 The city recorded 51 homicides in 2006, a 13.5 percent decrease from the previous year. In 2007, Gary had 71 homicides — almost a 40 percent increase over 2006.

In March, 2008 the Chief of Police, Deputy Chief and a police sergeant were all indicted by the federal court for violating the of a Gary resident.

Gary is "T" shaped,Fact|date=May 2008 with its northern border on . At the Northwesternmost section Gary borders Hammond and . The town of Miller Beach, considered by Gary to be its easternmost neighborhood, borders Lake Station and Portage. Gary's southernmost section borders Hobart and Merrillville.

Gary, like Chicago, has a variable climate. In July and August, the warmest months, high temperatures average 84 °F (29 °C) and peak just above 100 °F (38 °C) and low temperatures average 63 °F (17 °C). In January and February, the coldest months, high temperatures average around 29 °F (-2 °C) and low temperatures average 13 °F (-11 °C), with at least a few days of temperatures dipping below 0 °F (-18 °C). The weather of Gary is greatly regulated by its proximity to , as it sits at the lake's southernmost point. Weather varies yearly. Tornadoes strike annually, though the city has generally avoided major damage. In summer months Gary is quite . The city's yearly precipitation averages about 40 inches. Summer is the rainiest season, with rainfall of short duration and very loud, drawn-out . Winters vary but are predominantly snowy with regular blizzards. Snowfall in Gary can average 24 to 36 inches per winter, but sometimes large s hit because of "," a phenomenon wherein large amounts of water evaporated from the lake deposits onto the shoreline areas inordinate amounts of snow.

There were 38,244 households out of which 31.2% had children under the age of 18 living with them, 30.2% were married couples living together, 30.9% had a female householder with no husband present, and 33.0% were non-families. 28.9% of all households were made up of individuals and 9.4% had someone living alone who was 65 years of age or older. The average household size was 2.66 and the average family size was 3.28.

Aetna is located on Gary's far east side along the . Aetna was developed in the 1930s and is home to an impressive collection of architecture. The eastern edge of Aetna is marked by wilderness and borders Miller Beach and the .

Ambridge is located on Gary's near west side along 5th Avenue. Ambridge was developed for workers at the nearby steel plant in the 1910s and 1920's, and is named after the American Bridge Works, which was a subsidiary of U.S. Steel. The neighborhood is home to a huge stock of prairie style and art deco homes. The Gary Masonic Temple is located in the neighborhood along with the Ambassador Apartment building. Located just south of , the neighborhood can be seen while passing Buchanan Street.

Black Oak is located on the far southwest side of Gary, in the vicinity of the Burr Street exit to the . It was annexed in the 1970s. Prior to that was associated with Hammond, and the area has Hammond telephone numbers. The community was convinced by Mayor Hatcher that they would benefit from better services provided by the city, than those through the county.

Downtown is the heart of Gary and is home to a number of office buildings. divides downtown Gary from the United States Steel Plant. Downtown Gary was developed in the 1920s and houses several pieces of impressive architecture, including several structures designed by . A new office building was constructed in the downtown in recent years, as was a new baseball stadium for the . A significant number of older structures have been demolished in recent years, but a number of abandoned buildings remain in the downtown area, including historic structures like Gary's Union Station and City Methodist Church.

Ivanhoe was a housing project located on Gary's west side along 11th Avenue west of Chase Street. Closed in the summer of 2007, the facility was "sealed off" by a chain link fence.

Marshalltown is a subdivision located on Gary's east side along Central Avenue and 21st Avenue to the east of Martin Luther King Drive. One of the newest neighborhoods in Gary, it was also one of the last to begin a conversion to subsidized residency.

Midtown is located to the south of Downtown Gary, along Broadway.

also known through the years as Miller Station or just simply as Miller, is a neighborhood on Gary's far east side. The original town of Miller predated the city of Gary by more than half a century. Miller developed around the old stagecoach stop and train station known, as early as the 1840s, as Miller's Junction. Miller Town Hall stands on the corner of Grand Boulevard and Miller Avenue at Old Hobart Road. The Historic Miller Schoolhouse, no longer used, still stands in Miller on Lake Street near the Miller South Shore train station.

Tarrytown is a subdivision located on Gary's west side between Whitcomb Street and Clark Road.

Tolleston is one of Gary's oldest neighborhoods, predating much of the rest of the city. It was named for an old settlement along the railroads of the area. The area is to the west of downtown Gary and south of the Ambridge area.

Westbrook is an apartment complex on the west side of the city between Taft and Chase Streets, adjacent to the old Pennsylvania Railroad tracks, and the neighborhood surrounding that complex. It lies just to the north of Tolleston.

The city of Gary has had a checkered history when it comes to education. As a result, test scores have fallen well below the national average of late. In response, multiple have been founded throughout the city as an alternative to the public schools. Since that time student performance has improved and the Gary Community School Corporation has built new elementary schools.

There are three school districts serving the city as well as multiple charter schools located within the city.

*Newspapers — Gary is served by two major newspapers based outside the city, as well as a Gary-based, largely African-American interest paper. These papers provide regional topics, and cover events in Gary.
**"", which was originally located in Gary. Offices and facilities for the "Post-Tribune" are now based in , a suburb of Gary.
**"The Times", previously known as the "Hammond Times". Offices and facilities for "The Times" are in nearby Munster.
**"The Gary Crusader", based in Gary and largely focused on black or interests and readership.

*Broadcast — Gary is served by five local broadcasters plus government access and numerous Chicago area radio and stations, and by other nearby stations in Illinois and Indiana.
** (Channel 18) a of WHME of South Bend, a affiliate.
**WPWR (Channel 50) is the Chicago affiliate, but is licensed to Gary. Studios and transmitters are co-located with WFLD's in Chicago, and like WFLD, WPWR is owned by .
** (Channel 56) is a affiliate licensed to Gary. Their studios are in Merrillville.
** (FM 88.7) is owned by the , and is used primarily as a teaching facility. Programming is maintained by students in the broadcast program at the Gary Career Center. WGVE also carries limited programming.
** (AM 1370) carries syndicated talk programming, and is owned by Pluria Marshall Jr.
** (AM 1270) is presently a owned-and-operated radio station, carrying programming from the Catholic-oriented Relevant Radio network.

The following franchises are based in Gary:

* GPTC () a commuter bus system that offers service to numerous stops throughout the city and neighboring . GPTC also has express service to locations outside of the city including connections to Chicago transit. Front door pickup is available for disabled citizens at no extra cost.

* GYY () is operating as the "third airport" for the Chicago area. It is currently undergoing much federally funded expansion, and the administration is courting airlines aggressively. already bases their corporate fleets here.Fact|date=June 2008 The National Guard is intending to base their Chicago area air operation there as well,Fact|date=June 2008 which would add much needed security to the airport, taking away some of the stigma of an airport in Gary.