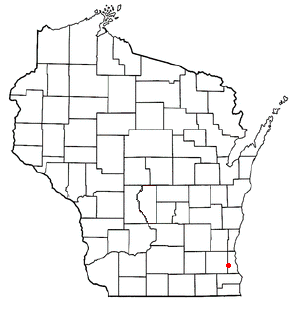 There were 3,260 households out of which 27.4% had children under the age of 18 living with them, 53.8% were married couples living together, 8.5% had a female householder with no husband present, and 34.9% were non-families. 29.1% of all households were made up of individuals and 12.6% had someone living alone who was 65 years of age or older. The average household size was 2.35 and the average family size was 2.93.

(1888-1970) was born in the town of Greenfield, Wisconsin. He and his wife moved to Hales Corners in 1920 to live in the house he had designed on Janesville Road.

Ben Hunt was a leader in the outdoor movement and in the reintroduction of pioneer skills. He introduced subjects such as rustic woodworking, whittling and carving, metal working, and historic Indian crafts and lore as hobbies and handicrafts for fun and leisure-time activities. He was involved with the Boy Scouts on a local and national level.

Ben Hunt and his cabin are known throughout the world. His writings, with his knowledge and homespun philosophy, have been printed in 26 languages. He wrote more than 20 books and 1000 magazine articles. His books on whittling and crafts have been popular for over half a century and some are still available on Amazon.com. Under the pen names Lone Eagle and Whittlin' Jim, Ben Hunt was a regular contributor to Boy's Life magazine, the official publication of the Boy Scouts of America. [http://www.historichalescorners.org/hchs4.htm]