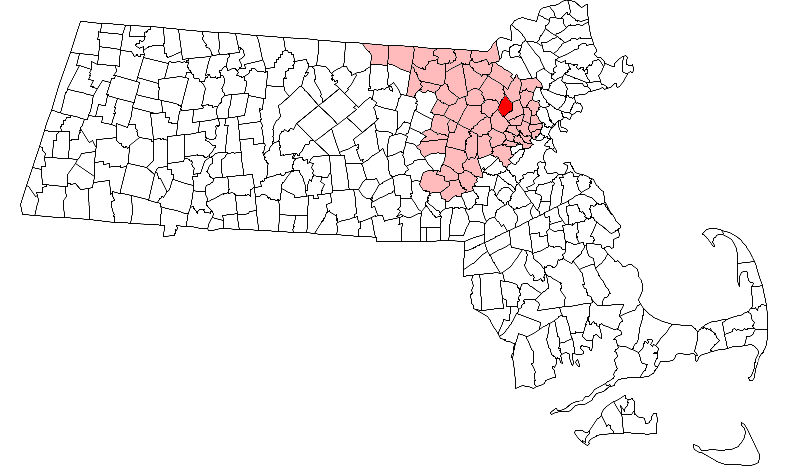 It is believed that Burlington takes its name from the English town of , however this has never been confirmed.It was first settled in 1641 and was officially incorporated on February 28, 1799. The town is sited on the watersheds of the Ipswich, Mystic, and Shawsheen rivers. It is now a suburban industrial town at the junction of the Boston-Merrimack corridor, but for most of its history it was almost entirely agricultural, selling hops and rye to Boston and supplementing that income with small shoe-making shops. Early railroad expansion passed the town by (although the town was serviced by the Middlesex Turnpike), limiting its early development, and Burlington continued to cure hams for the Boston market and produce milk, fruit, and vegetables. This picture changed drastically, however, as soon as Route 128 was built. The highway kicked off an enormous expansion, and between 1955 and 1965 Burlington was the fastest growing town in the state. In one five year period, its population tripled as residential and commercial retail development exploded creating the town's present character.

Burlington's public schools have recently graduated many prominent athletes, including four Olympians, and othes who have gone to have successful careers the NHL, NFL, and Major League Baseball. In addition, Burlington is home to national champion Pop Warner cheerleading teams.

The Kevin James movie was filmed in the Burlington Mall.

Located in northeastern Massachusetts, Burlington is bordered by Bedford on the west, Billerica on the northwest, Wilmington on the northeast, Woburn on the southeast and south, and Lexington on the south. Burlington is convert|12|mi|km south of Lowell, convert|13|mi|km northwest of Boston, convert|36|mi|km southeast of Fitchburg, and convert|224|mi|km from . Its highest point is Greenleaf Mountain (290' above sea level), the lowest point is the Great Meadow (150' above sea level). The elevation at Town Hall is 220' above sea level. The largest body of water is the 500 million gallon Mill Pond Reservoir in the eastern part of the town.

There were 8,289 households out of which 32.6% had children under the age of 18 living with them, 65.2% were married couples living together, 9.1% had a female householder with no husband present, and 23.1% were non-families. 19.1% of all households were made up of individuals and 7.7% had someone living alone who was 65 years of age or older. The average household size was 2.76 and the average family size was 3.18.

Burlington is governed by a 108 member representative (18 representatives elected per precinct) and a five member executive . The members of the Board as of early 2008 and the first election dates and terms ends are [ [http://burlington.org/selectmen.htm Burlington Selectmen] ] :

The current is Robert Mercier. Thomas Hickey is the Assistant Town Administrator.

Burlington has six s (four elementary schools, one middle school, and one high school) which comprise the Burlington Public School District. The elementary schools are Fox Hill, Francis Wyman, Memorial, and Pine Glen. The middle school is Marshall Simonds, and one of the town parks is named after Marshall Simonds. The high school is simply called Burlington High School. Burlington is also served by the . In addition it is home to several s.

Burlington is also the home to a campus of and one of the three campuses of .

Over the last 15 years, Burlington has experienced a boom in commercial growth with the continuous expansion of the Burlington Mall and the construction of the [http://www.waysidecommons.com/ Wayside Commons] , which includes an and a . also now calls Burlington home. Many new buildings have been built along the town's main road Cambridge St. (Rt. 3A) which have ushered in new technology companies. It is a relatively well positioned town in the state - located at the intersection of Interstate 95 and US 3, Burlington is just 20 minutes from Boston, half an hour from New Hampshire, and an hour from Rhode Island.

has a major engineering facility in Burlington. Patriot Partners LLC, a Framingham based developer, is proposing to build a 250-acre biotech complex, the largest in the region, close to routes 3 and 128. The complex will include labs, offices, retail shops and housing units. [http://www.boston.com/business/healthcare/articles/2008/07/22/biotech_complex_would_be_regions_largest]

Shops and attractions in Burlington include:

In the Middlesex Mall: , , Market Basket and Joanne Fabrics.

*The Burlington Town Common and Simonds Park are in the center of town and there are multiple parks and public recreation facilities throughout town which have basketball courts, tennis courts, baseball fields, soccer fields, gymnasia, an indoor skating rink (Burlington Ice Palace) and a .

*Burlington is home to the Lahey Clinic Medical Center

*Rt. 128 / I95, a circumferential highway around Boston, is considered the technology center of the East Coast. Burlington's stretch of 128, located between Route 3 and is home to numerous sizable buildings housing major companies, such as and and the bank .

* The Mill Pond Conservation Area [ [http://www.burlington.org/conservation/CON_areas.htm#MillPondCA Town Of Burlington Conservation Areas] ] is in the eastern part of town bordering Woburn and Wilmington. The largest conservation area in Burlington, the Mill Pond Conservation Area includes over convert|140|acre|km2 of rolling and steep terrain. Numerous marked and unmarked trails cross through the conservation area. These trails allow for long enjoyable hiking or biking experiences. The land has numerous access points, including the corner of Winter and Chestnut Streets, through a gate at the end of Hansen Avenue, and through a gate at the end of the offshoot from Town Line Road.

* The Mill Pond located within the Mill Pond Conservation Area. Fishing is allowed with special permit. The pond is feeding one of the two water treatment plants in Burlington. The Mill Pond Water Treatment Plant has been upgraded in 2007 and has the capacity to treat up to 6 million gallons of water per day [ [http://www.burlington.org/dpw/water/water.html Burlington Water Department] ] .

* The , also known as the Burlington Landlocked Parcel [ [http://www.landlockedforest.com Burlington Landlocked Forest] ] , consists of convert|270|acre|km2 spanning the borders of Burlington, Bedford, and Lexington, and contains convert|12|mi|km of hiking/mountain biking trails, vernal pools, abundant wildlife, historic stone walls and other structures, meadows, and old growth forest.The majority of the land is owned by the city of Burlington which wisely has kept it as open space since acquiring it by eminent domain in 1985. It borders Route 3 in Burlington to the east, Route 62 in Bedford to the north, conservation land in Lexington to the west and Route 128 to the South. The main trail head to the Forest is located at the intersection of Routes 3 and 62 in Bedford. A secondary trail head can be found on Turning Mill Road in Lexington, under the power lines at the site of the future West Lexington Greenway. The Landlocked Parcel is currently not protected land and there have been recent discussions, in 2008, between Burlington and Patriot Partners to sell the land to the developer who would bulldoze the forest to build a large biotechnology complex. A citizen group, Friends of the Burlington Landlocked Forest, has been organized to attempt prevent to this sale and to make the Forest designated conservation land.

* The is envisioned as one of the great public parks of Greater Boston, however it fell into great neglect. This over two hundred acre public park on the Burlington-Woburn border was created by Mary P.C. Cummings 1927 and was entrusted to the City of Boston to be kept forever open as a recreational park. In recent years, the City of Boston has tried to discourage public access and has investigated selling the park to fund the . The maintain a field [ [http://wikimapia.org/2058815/ The Burlington RC Flyers' Airstrip in Mary Cummings Park] ] in the park.