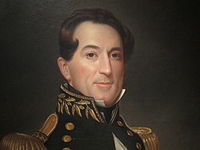 Farragut as he appears in the National Portrait Gallery in Washington, D.C.

David Glasgow Farragut (July 5, 1801 – August 14, 1870) was a flag officer of the United States Navy during the American Civil War. He was the first rear admiral, vice admiral, and admiral in the United States Navy.[1][2] He is remembered in popular culture for his order at the Battle of Mobile Bay, usually paraphrased: "Damn the torpedoes, full speed ahead!" by U.S. Navy tradition.[1][3]

Farragut was born in 1801 to Elizabeth Shine (b. 1765 - d. 1808), of North Carolina Scots-Irish descent, and her husband George Farragut, a native of Minorca, Spain, at Lowe's Ferry on the Holston River. It was a few miles southeast of Campbell's Station, near Knoxville, Tennessee.[4] His father operated the ferry and also served as a cavalry officer in the Tennessee militia.[2] Born Jordi Farragut, his father became a Spanish merchant captain from Minorca, son of Antoni Farragut and Joana Mesquida. He had joined the American Revolutionary cause after arriving in America in 1766, when he changed his first name to George.[4] The Farraguts moved west to Tennessee after George finished serving in the American Revolution.

David's birth name was James. After his mother's death, he agreed to living with and being adopted in 1808 by David Porter, a naval officer whose father had been friends with his father. In 1812 James adopted the name David in honor of his adoptive father, with whom he went to sea late in 1810. David Farragut grew up in a naval family, as the adoptive brother of future Civil War admiral David Dixon Porter and commodore William D. Porter.

Through the influence of his adoptive father, at the age of nine, Farragut was commissioned a midshipman in the United States Navy on December 17, 1810. A prize master by the age of 12, Farragut fought in the War of 1812, serving in Captain David Porter's frigate USS Essex. The young midshipman quelled a mutiny by telling an assailant that he'd be thrown over the side if there was any trouble. Farragut participated in capture of HMS Alert on August 13 of 1812 and then helped to establish America's first naval base and colony in the Pacific, named Madisonville during the ill-fated Nuku Hiva Campaign. At the same time the Americans battled the hostile tribes on the islands with the help of their Te I'i allies.

Farragut was 12 years old when, during the War of 1812, he was given the assignment to bring a ship captured by the USS Essex, safely to port.[5] He was wounded and captured while serving on the Essex during the engagement at Valparaiso Bay, Chile against the British on March 28, 1814.

Farragut was promoted to lieutenant in 1822 during the operations against West Indies pirates, became a commander in 1844, and a captain in 1855.

After appointment and an initial cruise as acting Lieutenant commanding USS Ferret, Farragut married Susan Caroline Marchant. After years of ill-health, Susan Farragut died on December 27, 1840. Farragut was noted for his kindly treatment of his wife during her illness.[6] After the death of his first wife, Farragut married Virginia Loyall, on December 26, 1843, with whom he had one surviving son, named Loyall Farragut, born October 12, 1844.

In 1853, Secretary of the Navy James C. Dobbin selected Commander David G. Farragut to create Mare Island Naval Shipyard. In August 1854, Farragut was called to Washington from his post as Assistant Inspector of Ordnance at Norfolk, Virginia. President Franklin Pierce congratulated Farragut on his naval career and the task he was to undertake. September 16, 1854, Commander Farragut commissioned the Mare Island Naval Yard at Vallejo, California. Mare Island became the port for ship repair on the West Coast. Captain Farragut left command of Mare Island, July 16, 1858. Farragut returned to a hero’s welcome at Mare Island, August 11, 1859. 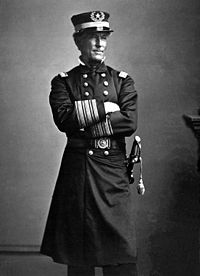 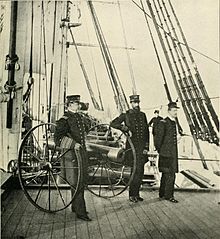 Farragut on board the Hartford 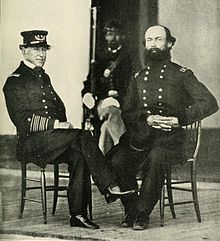 Though living in Norfolk, Virginia, prior to the Civil War, Farragut made it clear to all who knew him that he regarded secession as treason. Just before the war's outbreak, Farragut moved with his Southern-born wife to Hastings-on-Hudson, a small town just outside New York City.[7]

He offered his services to the Union but was initially given just a seat on the Naval Retirement Board. Offered a command by his foster brother David Dixon Porter for a special assignment, he hesitated upon learning the target might be Norfolk. As he had friends and relatives living there, he was relieved to learn the target was New Orleans. The Navy had some doubts about Farragut's loyalty to the Union because of his southern birth as well as that of his wife. Porter argued on his behalf and Farragut accepted for the major role of freeing New Orleans from Confederate control.[7]

In April 1862, Farragut commanded the West Gulf Blockading Squadron, with his flagship the USS Hartford. After a heavy bombardment, Farragut ran past the Fort Jackson, Fort St. Philip, and the Chalmette batteries to take the city and port of New Orleans on April 29, a decisive event in the war. Congress honored him by creating the rank of rear admiral on July 16, 1862, a rank never before used in the U.S. Navy. Before this time, the American Navy had resisted the rank of admiral, preferring the term "flag officer", to distinguish the rank from the traditions of the European navies. Later that year Farragut passed the batteries defending Vicksburg, Mississippi but had no success there. A makeshift Confederate ironclad forced his flotilla of 38 ships to withdraw in July 1862.

While an aggressive commander, Farragut was not always cooperative. At the Siege of Port Hudson the plan was that Farragut's flotilla would pass by the guns of the Confederate stronghold with the help of a diversionary land attack by the Army of the Gulf, commanded by General Nathaniel Banks, to commence at 8:00 am on March 15, 1863. Farragut unilaterally decided to move the timetable up to 9:00 pm on March 14, and initiated his run past the guns before Union ground forces were in position. By doing so, the uncoordinated attack allowed the Confederates to concentrate on Farragut's flotilla and inflict heavy damage on his warships.

Farragut's battle group was forced to retreat with only two ships able to pass the heavy cannon of the Confederate bastion. After surviving the gauntlet, Farragut played no further part in the battle for Port Hudson, and General Banks was left to continue the siege without advantage of naval support. The Union Army made two major attacks on the fort, and both were repulsed with heavy losses. Farragut's flotilla was splintered, yet was able to blockade the mouth of the Red River with the two remaining warships; he could not efficiently patrol the section of the Mississippi between Port Hudson and Vicksburg. Farragut's decision proved costly to the Union Navy and the Union Army, which suffered its highest casualty rate of the Civil War at Port Hudson.

On August 5, 1864, Farragut won a great victory in the Battle of Mobile Bay. Mobile was then the Confederacy's last major port open on the Gulf of Mexico. The bay was heavily mined (tethered naval mines were known as torpedoes at the time) [1]. Farragut ordered his fleet to charge the bay. When the monitor USS Tecumseh struck a mine and sank, the others began to pull back.

Farragut could see the ships pulling back from his high perch, where he was lashed to the rigging of his flagship, the USS Hartford. "What's the trouble?", he shouted through a trumpet from the flagship to the USS Brooklyn. "Torpedoes!" was shouted back. "Damn the torpedoes!" said Farragut, "Four bells. Captain Drayton, go ahead! Jouett, full speed!"[8][9] The bulk of the fleet succeeded in entering the bay. Farragut triumphed over the opposition of heavy batteries in Fort Morgan and Fort Gaines to defeat the squadron of Admiral Franklin Buchanan.

On December 21, 1864, Lincoln promoted Farragut to vice admiral. After the war he was promoted to admiral on July 25, 1866.[2] His last active service was in command of the European Squadron from 1867 to 1868, with the screw frigate USS Franklin as his flagship. Farragut remained on active duty for life, an honor accorded to only six other US naval officers.[10]

Farragut died at the age of sixty-nine in Portsmouth, New Hampshire, from a heart attack while on vacation in the late summer of 1870. He is interred at Woodlawn Cemetery, in the Bronx borough of New York.

There are very few Naval officers in American history who have earned the distinction to be honored on US postage stamps more than once, or at all, and David Farragut is one of them. The first postage stamp to honor Farragut, the 1-dollar black issue of 1903. Because of the larger denomination of 1-dollar, which was a notable sum in 1903, the number of issues printed was much less than average. Consequently the stamp is quite scarce and very valuable today. The Navy Issue of 1937 includes (among five in a series) a 3-cent purple stamp which depicts Admirals David Farragut (left) and David Porter, with a contemporary warship displayed at center and paid the domestic letter rate at that time. The last postage issue (to date) honoring Farragut was released June 29, 1995, also paying the current letter rate at the time of issue.[11][12] 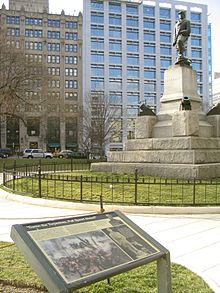 Admiral David G. Farragut, crafted in 1881 from the propeller of his flagship, stands in Farragut Square in downtown Washington, D.C. The National Park Service interpretive plaque in the foreground prominently quotes his famous order. 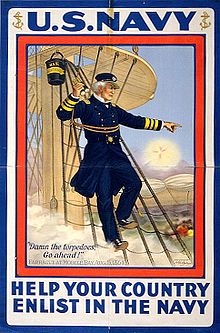 World War I poster with Admiral Farragut at Mobile Bay shouting out: "Damn the torpedoes, go ahead!" 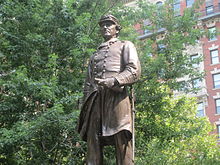 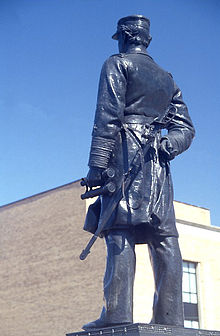 Numerous places and things are named in remembrance of Admiral Farragut: 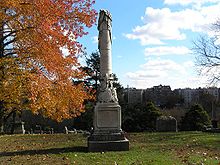 The monument of Admiral David Farragut in Woodlawn Cemetery