The Mysterious Island (French: L'Île mystérieuse) is a novel by Jules Verne, published in 1874. The original edition, published by Hetzel, contains a number of illustrations by Jules Férat. The novel is a sequel to Verne's famous Twenty Thousand Leagues Under the Sea and In Search of the Castaways, though thematically it is vastly different from those books. An early draft of the novel, initially rejected by Verne's publisher and wholly reconceived before publication, was titled Shipwrecked Family: Marooned With Uncle Robinson, seen as indicating the influence on the novel of Robinson Crusoe[1] and The Swiss Family Robinson.[2]

The book tells the adventures of five Americans on an uncharted island in the South Pacific. The story begins in the American Civil War, during the siege of Richmond, Virginia, the capital of the Confederate States of America. As famine and death ravage the city, five northern prisoners of war decide to escape by the unusual means of hijacking a balloon. The five are Cyrus Smith, a railroad engineer in the Union army (named Cyrus Harding in some English translations); his black manservant Neb (short for Nebuchadnezzar), whom Verne repeatedly states is not a slave but an ex-slave who had been freed by Smith; the sailor Bonadventure Pencroff (who is addressed only by his surname, but his "Christian name", Bonadventure, is given to their boat; in other translations, he is also known as Pencroft); his protégé Harbert Brown (called Herbert in some translations), a young boy whom Pencroff raises as his own after the death of his father (Pencroff's former captain); and the journalist Gedéon Spilett (Gideon Spilett in English versions). The company is completed by Cyrus' dog 'Top'.[1]

After flying in stormy weather for several days, the group crash-lands on a cliff-bound, volcanic, unknown (and fictitious) island, described as being located at 34°57′S 150°30′W﻿ / ﻿34.95°S 150.5°W﻿ / -34.95; -150.5, about 2,500 kilometres (1,600 mi) east of New Zealand. (In reality, the closest island is located at 27°36′S 144°22′W﻿ / ﻿27.6°S 144.36°W﻿ / -27.6; -144.36.[citation needed] In location and description though, the phantom island Ernest Legouve Reef may correspond to the rock that is left of the mysterious island at the end of the novel. ) They name it "Lincoln Island" in honor of American President Abraham Lincoln. With the knowledge of the brilliant engineer Smith, the five are able to sustain themselves on the island, producing fire, pottery, bricks, nitroglycerin, iron, a simple electric telegraph, a home on a stony cliffside called "Granite House", and even a seaworthy ship. They also manage to figure out their geographical location. Throughout their stay on the island, the group has to overcome bad weather, and eventually adopts and domesticates an orangutan, Jupiter, abbreviated to Jup (or Joop, in Jordan Stump's translation).

The mystery of the island seems to come from periodic and inexplicable dei ex machina: the unexplainable survival of Cyrus Smith from his fall from the balloon, the mysterious rescue of his dog Top from a dugong, the presence of a box full of equipment (guns and ammunition, tools, etc.), the finding of a message in the sea calling for help, the finding of a lead bullet in the body of a young pig, and so on.

Finding a message in a bottle, the group decides to use a freshly built small ship to explore the nearby Tabor Island, where a castaway is supposedly sheltered. They go and find Ayrton (from In Search of the Castaways) living like a wild beast, and bring him back to civilization and redemption. Coming back to Lincoln Island, they are confused by a tempest, but find their way to the island thanks to a fire beacon which no one seems to have lit.

At a point, Ayrton's former crew of pirates arrives at the Lincoln Island to use it as their hideout. After some fighting with the heroes, the pirate ship is mysteriously destroyed by an explosion. Six of the pirates survive and considerably injure Harbert through a gunshot. They pose a grave threat to the colony, but suddenly the pirates are found dead, apparently in combat, but with no visible wounds. Harbert contracts malaria and is saved by a box of sulphate of quinine, which mysteriously appeared on the table in the Granite House.

The secret of the island is revealed when it turns out to be Captain Nemo's hideout, and home harbour of the Nautilus.

It is stated that having escaped the Maelstrom at the end of Twenty Thousand Leagues Under the Sea, the Nautilus sailed the oceans of the world until all its crew except Nemo had died. Now an old man with a beard, Nemo returned the Nautilus to its port under Lincoln Island.

All along it was Captain Nemo who had been the savior of the heroes, provided them with the box of equipment, sent the message revealing Ayrton, planted the mine that destroyed the pirate ship, and killed the pirates with an "electric gun" (Most likely one of the air rifles that is used in the previous novel Twenty Thousand Leagues Under the Sea). On his death bed Captain Nemo reveals his true identity as an Indian Prince Dakkar, a son of a Raja of the then independent territory of Bundelkund and a nephew of the Indian hero Tippu-Sahib. After taking part in the failed Indian Rebellion of 1857, Prince Dakkar escaped to a deserted island with twenty of his compatriots and commenced the building of the Nautilus with the new name of Captain Nemo. Nemo tells his life story to Cyrus Smith and his friends and dies, saying "God and my country!" The Nautilus is then scuttled and serves as Captain Nemo's tomb.[2]

Eventually, the island explodes in a volcanic eruption. Jup the orangutan falls down a crack in the ground and dies. The colonists, warned by Nemo, find themselves at sea on the last remaining boulder of the island that is above sea level. They are rescued by the ship Duncan, which has come to pick up Ayrton and was itself informed by a message left on Tabor Island by Nemo.

In September 1875 Sampson Low, Marston, Low, and Searle published the first British edition of Mysterious Island in three volumes entitled Dropped from the Clouds, The Abandoned, and The Secret of the Island (195,000 words). In November, 1875 Scribners published the American edition of these volumes from the English plates of Sampson Low. The purported translator, W. H. G. Kingston, was a famous author of boys' adventure and sailing stories who had fallen on hard times in the 1870s due to business failures, and so he hired out to Sampson Low as the translator for these volumes. However, it is now known that the actual translator of Mysterious Island and his other Verne novels was actually his wife, Agnes Kinloch Kingston, who had studied on the continent in her youth. The Kingston translation changes the names of the hero from "Smith" to "Harding"; "Smith" is a name often used by gypsies and not suitable for an English hero. In addition many technical passages were abridged or omitted and the anti-imperialist sentiments of the dying Captain Nemo were purged so as not to offend English readers. This became the standard translation for more than a century.

In 1876 the Stephen W. White translation (175,000 words) appeared first in the columns of The Evening Telegraph of Philadelphia and subsequently as an Evening Telegraph Reprint Book. This translation is more faithful to the original story and restores the death scene of Captain Nemo, but there is still condensation and omission of some sections such as Verne's description of how a sawmill works. In the 20th century two more abridged translations appeared: the Fitzroy Edition (Associated Booksellers, 1959) abridged by I. O. Evans (90,000 words) and Mysterious Island (Bantam, 1970) abridged by Lowell Blair (90,000 words).

This edition in English by F. Raynal has additional appendices by French scholar Dr Christiane Mortelier who presents a convincing case for the influence of Francis Raynal's 19th century publication "Wrecked On A Reef" (originally published in French as "Les Naufrages des Iles Auckland") on Verne's 'Mysterious Island'. Verne read Raynal's account of the wreck of the 'Grafton' (Captain Musgrave) on the subantarctic Auckland Islands and loosely based his story on this true account of shipwreck, survival, privation, and ultimate rescue. The Grafton was wrecked in the Auckland Islands on 3 January 1864. The crew of five (including Musgrave) survived for 19 months before three of them sailed to Stewart Island (New Zealand) in a boat they had made. The remaining two were rescued. Verne incorporated much of this historical material into his 'Mysterious Island' narrative. 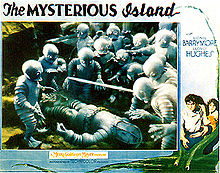 Works inspired by The Mysterious Island