::"For the Danish mathematician and poet, see ." 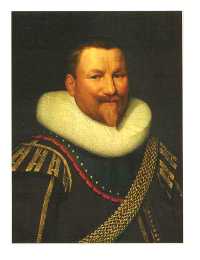 Piet Pieterszoon Hein (or Pieter Pietersen Heyn) (, &ndash; , ) was a Dutch naval officer and during the between the United Provinces and Spain.

Hein was born in (now part of ), the son of a sea captain, and he became a sailor while he was still a teenager. In his twenties, he was captured by the Spanish, and served as a -slave for about four years, probably between 1598 and 1602, when he was traded for Spanish prisoners. Between 1603 and 1607 he was again held captive by the Spanish, when captured near .

In 1607, he joined the and left for , returning with the rank of captain (of the "Hollandia") five years later. He married Anneke Claesdochter de Reus and settled in Rotterdam. In 1618, when he was captain of the "Neptunus", both he and his ship were pressed into service by . In 1621 he left his vessel behind and traveled overland to the Netherlands. For a year in 1622 he was a member of the local government ("schepen") of Rotterdam, although he didn't even have citizenship of this city: the cousin of his wife, one of the three s, made this possible.

In 1623, he became vice- of the new (WIC) and sailed to the West Indies the following year. In , he briefly captured the Portuguese settlement of Salvador, personally leading the assault on the sea fortress of that town. Then he attacked in but failed to capture the city. In a subsequent raid in 1627 to retake , he failed but captured over thirty Portuguese ships with a large cargo of .

Hein is today often called a pirate, though he was a as the Republic was at war with the and this was what would make Hein most famous. Of course some privateers behaved no better than common pirates, but Hein was a strict disciplinarian who discouraged unruly conduct among his crews and had for the day rather enlightened views about "Indian" tribes, slaves and members of other religions. Also he never was an individual privateer but commanded entire fleets of warships.

In 1628, Admiral Hein, with as his , sailed out to capture the loaded with silver from their American colonies and the . With him was Admiral and he was later joined by a squadron of Vice-Admiral . Part of the Spanish fleet in Venezuela had been warned because a Dutch cabin boy had lost his way on and was captured, betraying the plan, but the other half from Mexico continued its voyage, unaware of the threat. Sixteen Spanish ships were intercepted; one galleon was taken after a surprise encounter during the night, nine smaller merchants were talked into a surrender; two small ships were taken at sea fleeing, four fleeing s were trapped on the n coast in the Bay of Matanzas.

After some musket volleys from Dutch s their crews surrendered also and Hein captured 11,509,524 guilders of booty in , , and other expensive trade goods, as and , without any bloodshed. The Dutch didn't take prisoners: they gave the Spanish crews ample supplies for a march to . The released were surprised to hear the admiral personally giving them directions in fluent Spanish; Hein after all was well acquainted with the region as he had been confined to it during his internment after 1603. The treasure was the company's greatest victory in the Caribbean.

As a result, the money funded the Dutch army for eight months allowing it to capture the fortress and the s enjoyed a cash of 50% for that year. He returned to the Netherlands in 1629, where he was hailed as a hero. Watching the crowds cheering him standing on the balcony of the town hall of he remarked to the burgomaster: "Now they praise me because I gained riches without the least danger; but earlier when I risked my life in full combat they didn't even know I existed...". Hein was the first and the last to capture such a large part of a Spanish "silver fleet" from America.

He became, after a conflict with the WIC about policy and payment, Lieutenant-Admiral of Holland and West Frisia on 26 March 1629, and thus factual supreme commander of the confederate Dutch fleet, taking as flag captain . He died the same year, in a campaign against the , the highly effective fleet of Habsburg and s operating from Dunkirk. As it happened his flotilla intercepted three privateers from . He deliberately moved his flagship in between two enemy ships to give them both simultaneous broadsides. After half an hour he was hit in the left shoulder by a cannonball and was killed instantly. He is buried in the Oude Kerk in .

The in is named in his honor, as is the former Dutch , Hr. Ms. Piet Heyn.