The Naval Strike and Air Warfare Center (NSAWC, pronounced "EN-SOCK") at Naval Air Station Fallon located in the city of Fallon in western Nevada is the center of excellence for naval aviation training and tactics development. NSAWC provides service to aircrews, squadrons and air wings throughout the United States Navy through flight training, academic instructional classes, and direct operational and intelligence support.

NSAWC consolidated three commands into a single command structure under a flag officer on 11 July 1996 to enhance aviation training effectiveness. The Naval Strike Warfare Center (STRIKE "U") based at NAS Fallon since 1984, was joined with the Navy Fighter Weapons School (TOPGUN) and the Carrier Airborne Early Warning Weapons School (TOPDOME) which both moved from NAS Miramar as a result of a Base Realignment and Closure (BRAC) decision in 1993. The Seahawk Weapon School was added in 1998 to provide tactical training for navy helicopters.

NSAWC is the primary authority on training and tactics development. NSAWC provides training, assessment, aviation requirements recommendations, research and development priorities for integrated strike warfare, maritime and overland air superiority, strike fighter employment, airborne battle management, Combat Search and Rescue (CSAR), Close Air Support (CAS), and associated planning support systems. The command is also responsible for the development, implementation, and administration of several courses of instruction while functioning as the Navy point of contact for all issues relating to the Air Combat Training Continuum. Additionally, NSAWC is the Navy point of contact for all issues related to the Fallon Range Training Complex.

Plans, Programs and Tactics (N5) is involved in tactics development and assessment for tactical aircraft and H-60 helicopters, program management and participation, mission planning, and inter/intra service liaison. N5 is the legacy "Strike U" organization and is headed by a Naval Aviator who typically fleets up from the N7 dept head position.

The Navy Fighter Weapon School (N7) instructs advanced methods of strike-fighter employment through the "TOPGUN" Strike Fighter Tactics Instructor (SFTI) course. Some have claimed it to be a "graduate-level" course, however, it is currently neither accredited as a graduate school nor does it provide postgraduate degrees in the academic sense. It also conducts the Strike Leader Attack Training Syllabus (SLATS) and Senior Officers Course (SOC); and manages air wing power projection training. N7 personnel retain the traditional light blue t-shirts and light brown leather nametags worn by TOPGUN personnel and have their own spaces (shared with N6 and N8) separate from the main NSAWC building that house the heritage of TOPGUN legacy in forms of photos and other memorabilia. The NSAWC F-16 aircraft sport the TOPGUN patch on the tail. 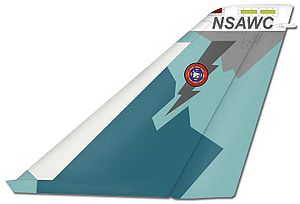 The Plans, Programs and Tactics (N5) department utilizes both NSAWC and fleet aircraft to develop the latest in airwing tactics. These are standardized and promulgated to the fleet via the Naval Warfare Publication 3-01 Carrier Airwing Tactical Memo, and updated bi-annually. The N5 department forms a core of expertise which functions to advise the Chief of Naval Operations on programmatic issues, and lends its support to real world operations as targeteers providing extensive liaison and standardization to other Naval and joint training agencies.

The Fallon Range Training Complex (FRTC) encompasses more than 10,200 square miles (26,000 km2) of airspace east of NAS Fallon, including a vast array of electronic systems supporting squadron, airwing and SFTI training. The heart of this program is the Advanced Digital Display System or ADDS. This computer-supported real-time digital display allows monitoring of each training event as it occurs on the ranges and recording capability for debriefing. Information is transmitted instantaneously from each aircraft to large screen displays at NSAWC and recorded for playback to the aircrews for post flight analysis of procedures and tactics. This system also allows controllers and aircrews to view an event from several different aspects in three dimensions.

One of NSAWC's most interactive departments is N2, naval intelligence. Within this department are targeting and weapons experts, assisted by enlisted intelligence specialists, who gather data on potential trouble areas around the globe where deployed naval forces might be called for presence or action. Inherent in the intelligence mission is preparation of aircrews for all circumstances they may face in combat. Another function of NSAWC's intelligence department is contingency preparation. When called upon, members will deploy, armed with the latest intelligence gathered, to assist commanders in theater.