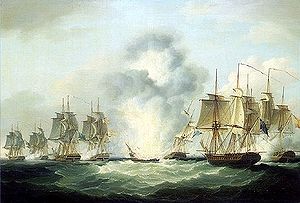 A flotilla (from Spanish, meaning a small flota (fleet) of ships, and this from French flotte), or naval flotilla, is a formation of small warships that may be part of a larger fleet. A flotilla is usually composed of a homogeneous group of the same class of warship, such as frigates, destroyers, torpedo boats, submarines, gunboats, or minesweepers. Groups of larger warships are usually called squadrons, but similar units of non-capital ships may be called squadrons in some places and times, and flotillas in others.

In modern navies, flotillas have tended to become administrative units containing several squadrons.[1] As warships have grown larger, the term squadron has gradually replaced the term flotilla for formations of destroyers, frigates and submarines in many navies.

A naval flotilla has no direct equivalent on land, but is, perhaps, the rough equivalent in value of a brigade or regiment.

In the Russian Navy, the word flotilla has tended to be used for "brown-water" naval units - those operating not in the oceans and real seas, but in inland seas or rivers. Among the former are the present-day Caspian Flotilla, the early 20th century Satakundskaya Flotilla, or the Aral Flotilla of the 1850s;[3] among the latter, the Don Military Flotilla (which was created several times over more than 200 years), the Red Volga Flotilla, which participated in the Kazan Operation during Russian Civil War, or the Danube Military Flotilla. In the 18th century, the term also applied to the comparatively small fleets operating on those seas where Russia did not have much naval presence yet, e.g. the Okhotsk Flotilla.

The word flotilla has been at times used to refer to a small fleet of vessels, commercial or otherwise.[4] On May 31, 2010, the word flotilla became a trending topic on Twitter, in response to the Gaza flotilla raid.[5]