The Seventh Fleet is the United States Navy's permanent forward projection force based in Yokosuka, Japan, with units positioned near Japan and South Korea. It is a component fleet force under the United States Pacific Fleet. At present, it is the largest of the forward-deployed U.S. fleets, with 50 to 60 ships, 350 aircraft and 60,000 Navy and Marine Corps personnel. With the support of its Task Force Commanders, it has three major assignments:

The Seventh Fleet was formed on 15 March 1943 in Brisbane, Australia, during World War II, under the command of Admiral Arthur S. "Chips" Carpender. It served in the South West Pacific Area (SWPA) under General Douglas MacArthur, and the Seventh Fleet commander also served as commander of Allied naval forces in the SWPA.

Most of the ships of the Royal Australian Navy were also part of the fleet from 1943 to 1945 as part of Task Force 74 (formerly the Anzac Squadron). The Seventh Fleet—under Admiral Thomas C. Kinkaid—formed a large part of the Allied forces at the Battle of Leyte Gulf, the largest naval battle in history. After the end of the war, the 7th Fleet moved its headquarters to Qingdao, China. 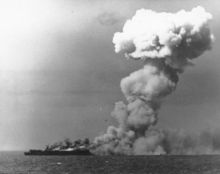 Princeton of the United States Third Fleet on fire east of Luzon at the Battle of Leyte Gulf.

In late 1948, the 7th Fleet moved its principal base of operations to the Philippines, where the Navy, following the war, had developed new facilities at Subic Bay and an airfield at Sangley Point. Peacetime operations of the Seventh Fleet were under the control of Commander in Chief Pacific Fleet, Admiral Arthur E. Radford, but standing orders provided that, when operating in Japanese waters or in the event of an emergency, control would pass to Commander Naval Forces Far East, which was a component of Gen. Douglas MacArthur's occupation force.

Over the next decade the Seventh Fleet responded to numerous crisis situations including contingency operations conducted in Laos in 1959 and Thailand in 1962. During September 1959, in the autumn of 1960, and again in January 1961, the Seventh Fleet deployed multiship carrier task forces into the South China Sea.[2] Although the Pathet Lao and North Vietnamese supporting forces withdrew in each crisis, in the spring of 1961 their offensive appeared on the verge of overwhelming the pro-American Royal Laotian Army. Once again the fleet sortied into Southeast Asian waters. By the end of April most of the Seventh fleet was deployed off the Indochinese Peninsula preparing to initiate operations into Laos. The force consisted of the Coral Sea and Midway carrier battle groups, antisubmarine support carrier Kearsarge, one helicopter carrier, three groups of amphibious ships, two submarines, and three Marine battalion landing teams. At the same time, shorebased air patrol squadrons and another three Marine battalion landing teams stood ready in Okinawa and the Philippines to support the afloat force. Although the administration of President John F. Kennedy already had decided against American intervention to rescue the Laotian government, Communist forces halted their advance and agreed to negotiations. The contending Laotian factions concluded a cease-fire on 8 May 1961, but it lasted only a year.

In June 1963 the Seventh Fleet held 'Flagpole '63,' a joint naval exercise with the Republic of Korea.[3] 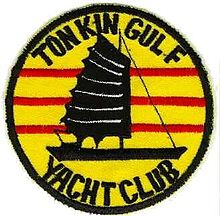 During the Vietnam War, Seventh Fleet engaged in combat operations against enemy forces through attack carrier air strikes, naval gunfire support, amphibious operations, patrol and reconnaissance operations and mine warfare. After the 1973 cease-fire, the Fleet conducted mine countermeasure operations in the coastal waterways of North Vietnam. Two years later, ships and aircraft of the Fleet evacuated thousands of U.S. citizens and refugees from South Vietnam and Cambodia as those countries fell to opposing forces. Between 1950 and 1970, the U.S. Seventh Fleet was also known by the tongue-in-cheek nickname "Tonkin Gulf Yacht Club". Most of the fleet's operations were conducted from the Tonkin Gulf at the time. The badge was unofficial but it quickly became very popular.[4]

A carrier task force of the Seventh Fleet, TF 74, made a U.S. incursion into the Bay of Bengal at the height of the Bangladesh Liberation War in December 1971.[5] TF 74 comprised the nuclear-powered aircraft carrier Enterprise; the amphibious assault carrier Tripoli; the destroyers Decatur, McKean, and Orleck; the guided-missile escorts Waddell, King, and Parsons; the nuclear-powered attack submarine Gurnard; and supply ship Wichita. On 15 December, a day before the surrender of Pakistan, the task force entered the Bay of Bengal, at a distance of some 1,760 km (950 nmi; 1,090 mi) from Dhaka.

Since Vietnam, the Seventh Fleet has participated in a joint/combined exercise called Team Spirit, conducted with the Republic of Korea armed forces. With capability to respond to any contingency, Fleet operations are credited with maintaining security during the Asian Games of 1986 and the Seoul Olympics of 1988. During 1989, Seventh Fleet units participated in a variety of exercises called PACEX, the largest peacetime exercises since World War II.

In 1996, two aircraft carrier battle groups were sent to the Taiwan Straits under Seventh Fleet control to demonstrate U.S. support for Taiwan during the Third Taiwan Strait Crisis. The Nimitz battle group made a high speed transit from the Persian Gulf, while the Independence battle group sortied from its Japanese homeports.

Of the 50-60 ships typically assigned to Seventh Fleet, 18 operate from U.S. facilities in Japan and Guam. These forward-deployed units represent the heart of Seventh Fleet. The 18 permanently forward-deployed ships of the U.S. 7th Fleet are the centerpieces of American forward presence in Asia. They are 17 steaming days closer to locations in Asia than their counterparts based in the continental U.S.. It would take three to five times the number of rotationally-based ships in the U.S. to equal the same presence and crisis response capability as these 18 forward deployed ships. On any given day, about 50% of Seventh Fleet forces are deployed at sea throughout the area of responsibility. The Seventh Fleet Command Ship is the USS Blue Ridge, forward deployed to Yokosuka, Japan. In 2004, Blue Ridge entered dry dock and command responsibility was transferred temporarily to USS Coronado. Blue Ridge returned to duty 27 September 2004.

Following the end of the Cold War, the two major military scenarios in which the Seventh Fleet would be used would be in case of conflict in Korea or a conflict between People's Republic of China and Taiwan (Republic of China) in the Taiwan Strait.

For operational and administrative purposes the U.S. Seventh Fleet, as with other numbered fleets, is organized into several specialized task forces. 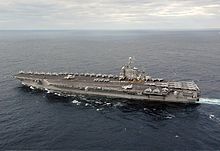 City of Corpus Christi, a forward deployed nuclear submarine of the 7th Fleet