Tom Petty and the Heartbreakers

Tom Petty and the Heartbreakers 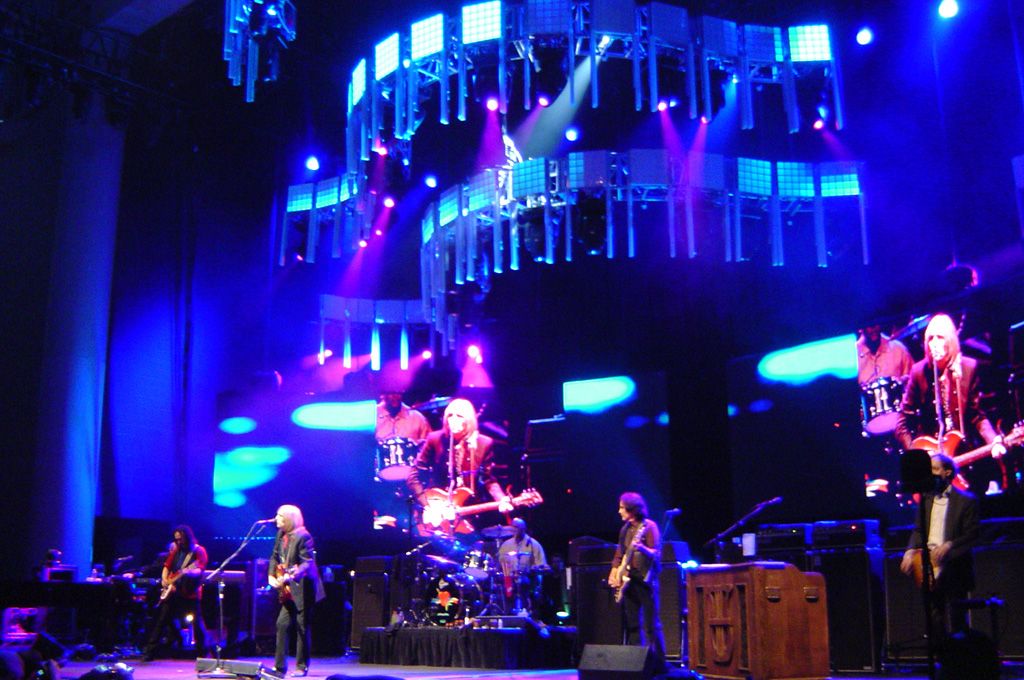 Tom Petty and the Heartbreakers are an American rock band, formed in 1975 by , , and and known for their -oriented . They have recorded numerous hit singles, such as "American Girl", "Breakdown" and "", most of which remain heavily played on mainstream radio. Despite this success, Petty is a vocal critic of the modern and the disintegration of independent radio stations (see "").

Petty's early bands included The Sundowners, The Epics and (the latter with Randall Marsh and future Heartbreakers members and ). In 1974, Mudcrutch signed with Shelter Records and re-located to Los Angeles, California. The band released one single, "Depot Street," in 1975, which failed to chart, and the group disbanded. According to Campbell, "Out of that the Heartbreakers sort of morphed and became what they are." The Heartbreakers began their recording career with a self titled album. Initially, the Heartbreakers did not gain much traction in America, although they achieved minor success in the UK playing on . Early singles included and American Girl. "Breakdown" was re-released to radio in the and became a hit in 1977, after word filtered back to the States that the band was creating a in the .

Their 1978 second album "" marked the band's first gold album, and featured the singles "Listen To Her Heart" and "I Need To Know". Shortly after its release, the band was dragged into a legal dispute when was sold to .

Petty refused to simply be transferred to another record label without his consent. He held fast to his principles for nine long months, which eventually led to him filing for .

After the dispute was settled, the Heartbreakers released their third album "Damn the Torpedoes" (1979) which rapidly went triple-platinum. It included "Don't Do Me Like That" and "Refugee", their breakthrough singles.

Though he was already extremely successful, Petty ran into trouble again when he and the Heartbreakers prepared to release "" (1981), the follow-up album to "Damn the Torpedoes". MCA wanted to release the record at the list price of $9.98, which was considered a high price for a record album at the time. This so-called "superstar pricing" was $1.00 more than the usual list price of $8.98. Petty voiced his objections to the price hike in the press, and the issue became a popular cause among music fans. Non-delivery of the album or naming it Eight Ninety-Eight were considered, but eventually MCA decided against the price increase. The album became a Top Ten hit, going platinum and spawning the hit single "The Waiting". The album also included the duet "Insider", with .

On their fifth album "" (1982) bass player was replaced by (formerly of 's backing band), giving the Heartbreakers their line-up until 1991. Long After Dark, features . The album was to feature a track called "Keepin' Me Alive", but producer vetoed it from the album. Petty has expressed that he feels the album would have turned out better if the song had been included on the album.

On the next album, "" (1985), the Heartbreakers picked up where they had left off. The recording was not without problems; Petty became frustrated during the mixing process and broke his left hand after punching through a wall. The album includes the hit single "Don't Come Around Here No More," which was produced by Dave Stewart. The video for the single featured Tom dressed as the Mad Hatter, mocking and chasing Alice from the book "", then cutting and eating her as if she were a cake. This caused minor controversy after it was criticized by groups, but the video did win an MTV Video Music Award.

A successful concert tour led to the live album "" (1986). The band's live capabilities were also showcased when invited the Heartbreakers to join him on his True Confessions tour through the U.S., , (1986) and (1987). Petty praised Dylan saying "I dont think there is anyone we admire more"

Also in 1987, the group released "", a studio album made to sound like a live recording, using a technique they borrowed from Bob Dylan. It includes "Jammin' Me", which Petty wrote with Dylan.

Tom Petty and the Heartbreakers' 1989 tour featured band opening every show. Petty eventually borrowed 's line "rebel without a clue" from "I'll Be You" for the title track of the album.

In 1991 the band released , produced by who had worked with Petty in . Songs included the title track itself and "Learning to Fly". By this time multi instrumentalist had joined the band. In 1993, Petty released "Greatest Hits" which included hit single "" . Shortly after Lynch was fired from the band and replaced by . Tom's second solo album, named Wildflowers was recorded and released after the firing of Lynch, like his last solo album, the album would feature extensive contributions from all members of the Heartbreakers, including new drummer Ferrone.

In 1995, a six entitled "" was released. Approximately half of the tracks were previously available on albums, while the rest were , demos and live tracks. Two notable tracks are a solo version of Tom's 1981 with , "Stop Draggin' My Heart Around" and the song "Waiting For Tonight," which features vocals from . The latter song also appeared on the two CD anthology released in 2000, .

In 1996, Petty "reunited" with the Heartbreakers and released a soundtrack to the movie "", starring and (see ""). Three singles were released from this album; these were "Walls (Circus)" (featuring ), "Climb that Hill" and a written by , "Change the Locks". The album also included a cover of a song by , "".

In 1999, Petty and the Heartbreakers released the album "Echo" with producer at the helm. Two songs were released as singles in the U.S., "Room at the Top" and "Free Girl Now". The album reached number 10 in the U.S. album charts.

In 2002, Petty and the Heartbreakers released "". Many of the tracks' lyrics contain stinging attacks on the music industry and major record companies. The album reached number 9 in the U.S. charts. played on three of the tracks. He also replaced the man who had previously been his replacement, on the band's 2002 tour as a result of Epstein's deepening personal problems and drug abuse. Epstein died in 2003. Tench described him as "the coolest guy in the band"

Tom's third solo album, 2006's , would come the closest to a true "solo" album as most of the music was performed by himself and , though Mike Cambell would contribute guitar parts for many of the songs.

In 2007, a film titled "Runnin' Down a Dream" was released, documenting the career of the band, directed by . That year, the Heartbreakers were also featured as the Halftime Show. In 2008 the members of Petty's prior band, , including Heartbreakers Petty, and along with Randall Marsh and Tom Leadon got together to record a album.

Other works and recognition

In 1985, Tom Petty and the Heartbreakers participated in the world-spanning charity rock concert . They also played at the 2001 benefit concert.

In 2002, the band was inducted into the during their first year of eligibility. The band also played at a special Harrison who had died the previous year.

In February 2006 Tom Petty and The Heartbreakers were the headline act at the fifth annual Bonnaroo Music and Arts Festival. In addition to Bonnaroo, Petty was on tour throughout the summer in 2006. The tour started in , on and end in Randalls Island, NY on August 19. Stops included major cities such as New York, St.Louis, Indianapolis and Denver. Supporting acts during the tour included , & . Additionally, joined Tom Petty onstage during the first eight concerts as well as subsequent second leg dates to perform various songs from the Heartbreakers' vast catalog. For the "Highway Companion Tour" they offered a Highway Companion's Club which allowed fans to recevie priority seating, discounts at the Tom Petty Store, a complimentary CD of "" and a personalized email address.

In 2006, the ABC U.S. television network hired Petty to do the music for its coverage.

On September 22, 2006, Tom Petty and the Heartbreakers received the keys to the City of Gainesville, Florida, where he and his bandmates either lived or grew up. Tom Petty quipped when questioned about the key he received from Gainesville's Mayor, "It's a lot nicer than the one we got in Chicago.". [http://hosted.ap.org/dynamic/stories/P/PEOPLE_TOM_PETTY?SITE=FLROC&SECTION=HOME&TEMPLATE=DEFAULT]

From July 2006 until 2007 The Rock and Roll Hall of Fame in Cleveland, Ohio featured an exhibit of items. Much of the content was donated by Petty himself from a visit to his home by some of the Rock Hall curatorial staff.