Fifty percent of the population of Nigeria adheres to Islam, compared to Christianity which represents 40% of the population.[1][2] Islam came to Northern Nigeria as early as the 9th century CE, and was well established in the Kanem-Bornu Empire during the reign of Humme Jilmi. It had spread to the major cities of the northern part of the country by the 16th century, later moving into the countryside and towards the Middle Belt uplands. The precise time Islam entered Africa's most populous country is debatable. However, the Nigeria-born London Muslim scholar Sheikh Dr. Abu-Abdulfattah Adelabu known as Ash-Shaykh Al-Afriqi, founder of Awqaf Africa London, whose students are behind several Islamic publications including EsinIslam.com and IslamAfrica.com argued in his publications such as Islam in Africa - West African in Particular, and Missionary and Colonization in Africa[3] that Islam had reached Sub-Sahara Africa, including Nigeria, as early as the 1st century of Hijrah through Muslim traders and expeditions during the reign of the Arab conquror, Uqba ibn al Nafia (622–683) whose Islamic conquests under the Umayyad dynasty, in Amir Muavia and Yazid periods, spread all Northern Africa or the Maghrib Al-Arabi, including present-day Algeria, Tunisia, Libya and Morocco.

Islam also came to the southwestern Yoruba-speaking areas during the time of Mansa Musa's Mali Empire. The Yorubas colloquially referred to Islam as "Esin-Mali", which means religion from Mali. The Muslims in Nigerian are predominantly Sunni in the Maliki school, which is also the governing Sharia law. However, there is an significant Shia minority, primarily in Sokoto State (see Shia in Nigeria).

History of Islam in Nigeria

Islam was first documented in Nigeria in the 9th century. Religious archives showed Islam had been adopted as the religion of the majority of the leading figures in the Bornu Empire during the reign of Mai (king) Idris Alooma (1571–1603), although a large part of that country still adhered to traditional religions.[4] He furthered the cause of Islam in the country by introducing Islamic courts, establishing mosques, and setting up a hostel in Mecca, the Islamic pilgrimage destination, for Kanuris.[5]

In the early 19th century, Islamic scholar Usman dan Fodio launched a jihad, the Fulani War, against the Hausa Kingdoms of Northern Nigeria. He was victorious, and established the Fulani Empire with its capital at Sokoto.[6]

A fringe group, led by Mohammed Marwa Maitatsine, started in Kano in the late 1970s and operated throughout the 1980s. Maitatsine (since deceased) was from Cameroon, and claimed to have had divine revelations superseding those of the Prophet Muhammad. With their own mosques and a doctrine antagonistic to established Islamic and societal leadership, its main appeal was to marginal and poverty-stricken urban in-migrants, whose rejection by the more established urban groups fostered this religious opposition. These disaffected adherents ultimately lashed out at the more traditional mosques and congregations, resulting in violent outbreaks in several cities of the north. 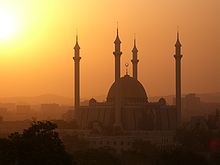 The national mosque during Harmattan

Two features of Islam are essential to understanding its place in Nigerian society. They are the degree to which Islam permeates other institutions in the society, and its contribution to Nigerian pluralism. As an institution in emirate society, Islam includes daily and annual ritual obligations; the hajj, or pilgrimage to Mecca; sharia, or religious law; and an establishment view of politics, family life, communal order, and appropriate modes of personal conduct in most situations.

Thus, even in 1990, Islam pervaded daily life. Public meetings began and ended with Muslim prayer, and everyone knew at least the minimum Arabic prayers and the five pillars of the religion required for full participation. Public adjudication (by local leaders with the help of religious experts, or Alkali courts) provided widespread knowledge of the basic tenets of sharia law—the Sunni school of law according to Malik ibn Anas was that primarily followed.

Air transport has made the hajj more widely available. Upper-income groups went several times and sent or took their wives as well.

Maintaining that the wide adoption of Islamic faith and traditions has succeeded to lay impacts both on written and spoken Nigerian vernaculars, Sheikh Adelabu, a Ph D graduate from Damascus asserted nearly all technical terms and cultural usages of Hausa and Fulani were derived from Islamic heritages, citing a long list of Hausa words adopted from Arabic. In furthering supports for his claims, Sheikh Adelabu gave - among many other common usages - the following words to be Yoruba's derivatives of Arabic vocabularies:[8]

Nigerian Islam is not highly organized. Reflecting the aristocratic nature of the traditional ruling groups, there were families of clerics whose male heirs trained locally and abroad in theology and jurisprudence and filled major positions in the mosques and the judiciary. These ulama, or learned scholars, had for centuries been the religious and legal advisers of emirs, the titled nobility, and the wealthy trading families in the major cities. Ordinary people could consult the myriads of would-be and practicing clerics in various stages of training, who studied with local experts, functioned at rites of passage, or simply used their religious education to gain increased "blessedness" for their efforts.

Sufi brotherhoods, a form of religious order based on more personal or mystical relations to the supernatural, were widespread, especially in the major cities. There the two predominant ones, Qadiriyah and Tijaniyah, had separate mosques and, in a number of instances, a parochial school system receiving grants from the state. The brotherhoods played a major role in the spread of Islam in the northern area and the middle belt.

The vast majority of the Muslims in Nigeria are adherents of the Sunni branch of Islam. However, there is an significant Shia minority, primarily in the Sokoto State. A relatively smaller minority follow the Ahmadiyya Islam, a reformatory sect originating in 19th century India.

The following table lists the Muslim populations of the larger ethnic groups in Nigeria.[9]