Islam in the Philippines

Islam in the Philippines

This article is about the religion of Islam in the Philippines. For the Muslim ethnic group, see Moro (ethnic group).

Islam is the oldest recorded monotheistic religion in the Philippines. Islam reached the Philippines between the 12th and 14th century with the arrival of Muslim traders from Persian Gulf and the Malabar Coast in Southern India, and their followers from several sultanate governments in the Malay Archipelago. According to the Department of U.S. Department of State International Religious Freedom Report for 2010, the Muslim population of the Philippines is between 5% to 9%.[1] While the majority of the population are Roman Catholic, some ethnic groups are Protestant, non-religious, Buddhist and Animist.[2]

Main article: History of the Philippines 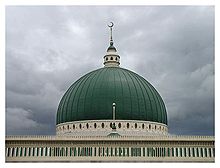 Mosque in Marawi City in the Philippines. 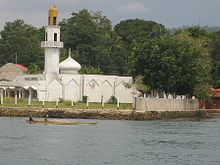 By the next century conquests had reached the Sulu islands in the southern tip of the Philippines where the population was animistic and they took up the task of converting the animistic population to Islam with renewed zeal. By the 15th century, most of Visayas (Central Philippines) and half of Luzon (Northern Philippines) and the islands of Mindanao in the south had become subject to the various Muslim sultanates of Borneo and much of the population in the South were converted to Islam. In the 15th century, Islam had been established in the Sulu Archipelago and spread from there to Mindanao; it had reached the Manila area by 1565. There was sporadic resistance from the local population

Moro (similar to 'Moors') is the appellation inherited from the Spaniards, for Filipino Muslims and tribal groups. The Moros seek to establish an independent Islamic province in the Mindanao and Visayas region. The term Bangsamoro a combination of the Old Malay-Spanish language word Moro inherited from al-Andalus in Spain. A significant amount of Moro rebellion occurred during the Philippine-American War in 1899. Conflicts and rebellion has continued in the Philippines beginning from the pre-colonial period and right up to the present.

The Ahmadiyya Muslim Community in Philippines was established in 1985[4]

The Autonomous Region in Muslim Mindanao (ARMM) is the region of the Philippines that is composed of all the Philippines' predominantly Muslim provinces, namely: Basilan (except Isabela City), Lanao del Sur, Maguindanao, Sulu and Tawi-Tawi, and the Islamic City of Marawi. It is the only region that has its own government. The regional capital is at Cotabato City, although this city is outside of its jurisdiction..