Ulama (Arabic: علماء‎ ʿUlamāʾ , singular عالِم ʿĀlim, "scholar"), also spelt ulema, refers to the educated class of Muslim legal scholars engaged in the several fields of Islamic studies. They are best known as the arbiters of shari‘a law. While the ulama are well versed in legal fiqh (jurisprudence) being Islamic lawyers, some of them also go on to specialize in other fields, such as hadith or tafseer.

In a broader sense, the term ulama is used to describe the body of Muslim clergy who have completed several years of training and study of Islamic sciences, such as a mufti, qadi, faqih, or muhaddith. Some Muslims[which?] include under this term the village mullahs and imams, who have attained only the lowest rungs on the ladder of Islamic scholarship; other Muslims[clarification needed] would say that clerics must meet higher standards to be considered ulama. This is why it is claimed[who?] that in Western society there are for the most of the time no ulama present, with the outcome of Muslims in the West searching for qualified knowledge from Islamic countries, to attain some accepted qualification. The Internet gives some streams of ulama speaking on a video record, which is very rare.[1]

The word ulama in English is plural, and indeclinable.

Ulama learned at Islamic religious schools, madrasahs, where they teach students about Islam and other areas of study. It is believed in Islam that a well-rounded education is something every Muslim must acquire in order to understand God’s religion in its entirety. By the end of their education, they acquire an Ijazah, an academic degree in Islamic law and jurisprudence, a practice that dates back to the first several centuries of Islam.[citation needed] Ulama also hold seminars where they give lectures and speeches about the area of Islam in which they specialize.

Afghanistan's Taliban regime was also headed by a mullah, Mullah Omar. However, in most countries, they are merely local power figures.

In certain Muslim countries, like Saudi Arabia and United Arab Emirates, where there are sharia courts, Islamic clergy become judges. Therefore, one of the jobs of ulama is the interpretation and maintenance of Islamic law in such countries.

In some countries like Saudi Arabia, Islamic clergy fulfill the role of a counsel for the king. There are also jobs for them in various governmental institutions.

There are various jobs available for the Islamic clergy at mosques, such as leading public prayers, preaching, and delivering sermons, especially at Friday prayers and some have made missionary activities a lifelong activity.

The ulama in most nations consider themselves to represent the ijma "consensus" of the Ummah "community of Muslims" (or to represent at least the scholarly or learned consensus). Many efforts to modernise Islam focus on the reintroduction of ijtihad and empowerment of the ummah to form their own ijma.

The ulama usually work within a tradition (madhhab) that starts with one of five classic jurists. A Sunni Muslim jurist usually belongs to one of the four main schools:

Some ulama are not associated with any school. They believe that it is necessary to derive rulings directly from the Qur'an and the Hadith, such as the Salafi/Ahl-e-Hadith. 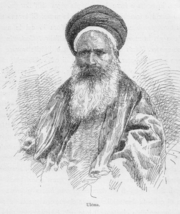 The formative period of Islamic jurisprudence stretches back to the time of the early Muslim communities. In this period, jurists were more concerned with pragmatic issues of authority and teaching than with theory.[2] Progress in theory happened with the coming of the early Muslim jurist Muhammad ibn Idris ash-Shafi`i (767–820), who codified the basic principles of Islamic jurisprudence in his book ar-Risālah. The book details the four roots of law (Qur'an, Sunnah, ijma, and qiyas) while specifying that the primary Islamic texts (the Qur'an and the hadith) be understood according to objective rules of interpretation derived from scientific study of the Arabic language.[3]

The 19th and 20th centuries were marked by a considerable loss of authority and influence of the ulama in most Islamic states. Many secular Arab governments attempted to break the influence of the ulama after their rise to power. Religious institutions were nationalized and the system of waqf "religious donations", which constituted the classical source of income for the ulama, was abolished.

In 1961, the Egyptian Nasser government put the Al-Azhar University, one of the highest Islamic intellectual authorities, under the direct control of the state. "The Azharis were even put in army uniforms and had to parade under the command of army officers" (G. Keppel, Jihad). In Turkey, the traditional dervish tekkes and Islamic schools were dissolved and replaced by state-controlled religious schools in the 1950s and 1960s. After the independence of Algeria, President Ahmed Ben Bella also deprived the Algerian ulama of their power.

Many ulama have left behind them only a lifetime of mediating disputes and giving sermons; their respectable contributions did not include authorship. Other ulama have been prolific authors, writing translations of the Qur'an or Quranic commentaries, studies of hadith, works of philosophy, religious admonition, etc. There are enormous bodies of religious literature that form not only the substance of the courses in Islamic seminaries, but inspirational reading for the ordinary Muslim. Most of this literature has not been translated into English, but remains in its original language (usually Arabic, Urdu, Persian, or Turkish). Some has been printed; some remains in manuscript form.

In order to become one of the ulama in the Ottoman Empire, one had to have studied at a madraseh and be an expert in all the religious sciences, specializing in one or two specifics. In addition, the student had to have been tested and approved by higher ranking ulama. Such assessment by experts gave the ulama legitimacy in the eyes of the public, because it imitated the way the Caliphs after the death of the Prophet Muhammad were appointed. In 14th and 15th century Ottoman Empire, there were not many madrasehs, and so the ulama traveled to countries such as Persia and Egypt to further their education. Upon the conquering of Istanbul however, the sultan converted eight churches into madrasehs and placed eight of the best ulama as the heads.[4] The ulama in the Ottoman Empire had a large influence over politics because it was believed that secular institutions were all subordinate to religion; the ulama were emblems of religious piety, therefore rendering them powerful over state affairs.[5] Ulama worked as priest-like authorities who had the role of interpreting and enforcing Islamic shariah law. These jobs were distributed amongst two types of ulama: Muftis, who interpreted Shariah law and the Qadi, who enforced Shariah law. The Ottomans had a strict hierarchy of ulama, with the Sheikh ul-Islam holding the highest rank. A Sheikh ul-Islam was chosen by a royal warrant amongst the qadis of important cities. The Sheikh ul-Islam had the power to confirm new sultans, but once the sultan was affirmed, it was the sultan who retained a higher authority than the Sheik ul-Islam. The Sheikh ul-Islam issued fatwas, which were written interpretations of the Quran that had authority over the community. The Sheikh ul-Islam represented the law of shariah and in the 16th century its importance rose which led to increased power. Sultan Murad appointed a Sufi, Yayha, as his Sheikh ul-Islam during this time which lead to violent disapproval. The objection to this appointment made obvious the amount of power the Sheikh ul-Islam had, since people were afraid he would alter the traditions and norms they were living under by issuing new fatwas.[6]

Guidelines to the Jurisprudence of Ottoman Ulema – Mehmet Ipsirli http://www.muslimheritage.com/topics/default.cfm?ArticleID=416