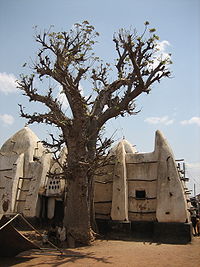 The spread of Islam into West Africa, beginning with ancient Ghana in the ninth century, was mainly the result of the commercial activities of North African Muslims. The empires of both Mali and Songhai that followed ancient Ghana in the Western Sudan adopted the religion. Islam made its entry into the northern territories of modern Ghana around the fifteenth century. Mande speakers (who in Ghana are known as Wangara) traders and clerics carried the religion into the area. The northeastern sector of the country was also influenced by an influx of Hausa Muslim traders from the 16th Century onwards, and a second wave of migrants escaping the fundamentalist jihads of Usman dan Fodio in northern Nigeria during the early nineteenth century.

Most Ghanaian Muslims are Sunni, following the Maliki version of Islamic law. However, since the 1980s, Shi'a Islam has been spreading rapidly after Lebanese traders set up businesses there. There are now an estimated one million Shi'as in Ghana now.[1] Sufism is not widespread in Ghana; the Tijaniyah and the Qadiriyah brotherhoods, however, are represented. The Ahmadiyya, a sect originating in nineteenth-century India, is also distinctively present.

Despite tensions in the Middle East, North Africa, and Nigeria since the mid-1970s, Ghanaian Muslims and Christians have had excellent relations. Guided by the authority of the Muslim Representative Council, religious, social, and economic matters affecting Muslims have often been redressed through negotiations. The Muslim Council has also been responsible for arranging pilgrimages to Mecca for believers who can afford the journey. In spite of these achievements, the council has not succeeded in taking initiatives for the upgrading of Islamic schools beyond the provision of basic Qur'anic instruction. This may explain the economic and technological gap between Muslims and non-Muslims.

Although the official Ghanaian census reports 16% of Ghanaians as being Muslims, this figure is questioned, particularly by local Muslim groups.[2]