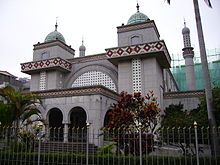 Islam in Taiwan is a slowly growing religion (about 0.3% of the population, it could be higher if included nominal Muslims from Indonesia) with an estimated 100 converts annually. There are about 45,000 registered Muslims in Taiwan, as of 2007.[1] There are 88,500 Indonesian Muslims working in Taiwan.[2] There are six mosques throughout Taiwan, with the most notable being the Taipei Grand Mosque.

The eastward spread of Islam

Islam is believed to have first reached Taiwan in the 17th century when Muslim families from the southern Chinese coastal province of Fujian accompanied Koxinga on his invasion of Taiwan to oust the Dutch from the southern city of Tainan in 1661. These people are believed to be the first Muslim settlers on the island. Their descendants however became assimilated into Taiwanese society and adopted the local customs and religions. On Taiwan, there are also descendants of Hui who came with Koxinga who no longer observe Islam, the Taiwan branch of the Guo (romanized as Kuo in Taiwan) family is not Muslim, but still does not offer pork at ancestral shrines. The Chinese Muslim Association counts these people as Muslims.[3] Also on Taiwan, one branch of this Ding (Ting) family descended from Sayyid Ajjal Shams al-Din Omar resides in Taisi Township in Yunlin County. They trace their descent through him via the Quanzhou Ding family of Fujian. Even as they were pretending to be Han chinese in Fujian, they still practiced Islam when they originally came to Taiwan 200 years ago, building a mosque, but eventually became Buddhist or Daoist. The Mosque is now the Ding families Daoist temple.[4] According to Professor Lien Ya Tang (連雅堂) in his book History of Taiwan 《臺灣通史》 (1918), there were few Muslims on the island most of whom were from other provinces in China. There was no spread of Islam and no mosques were built.[5]

The second wave of Muslim migrants occurred during the Chinese Civil War in the 20th century when around 20,000 Muslim families fled mainland China with the Kuomintang to Taiwan in 1949. Many of them were soldiers and government employees at the time and came from provinces were Islam is strong such as Yunnan, Xinjiang, Ningxia, and Gansu (mostly southern and western regions of China). During the 1950s, contact between Muslims and Han Chinese were limited due to differences in custom. The Muslims were largely dependent on each other through the ummah (Islamic community) that met regularly in a house on Lishui Street (麗水街) in Taipei. However, by the 1960s when Muslims realized that returning to mainland China would be unlikely and out of professional need, contact with Han Chinese became more frequent though there was still a considerable degree of interdependence within the ummah. Since the 1980s, thousands of Muslims from Myanmar and Thailand have migrated to Taiwan in search of a better life. They are descendants of nationalist soldiers that fled Yunnan when the communists took over mainland China.[6]

The majority of Taiwanese Muslims today are relatively recent converts, mostly women, who have married mainlander Muslims. Today there are some 53,000 native Taiwanese Muslims and a further 80,000 Indonesian workers making the current total just over 140,000 Muslims living in Taiwan.

A Democratic Progressive Party legislator in Taiwan, Yu Tien made offensive comments regarding Muslims, claiming they were a "light hearted joke", linking terrorism to Muslims while campaigning. His wife had said she was a “Muslim terrorist early on … like [Osama] bin Laden.” Yu replied: “People have been saying that I am afraid of my wife. Faced with such a Muslim militant, how could I not be afraid?” He then apologized after the incident, saying he was "Deeply apologetic", and "We weren’t trying to connect Muslims with terrorists and we hope the public doesn’t misunderstand us, We respect every religion.”[7]

In Taiwan, employers can also be fined if they force Muslim workers to come into contact with pork. In Chiayi city a couple was fined for doing that to an Indonesian worker, in addition to other offences such as a long workday and threats of deportation.[8]

There are a total of six mosques throughout Taiwan[9]: