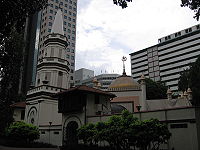 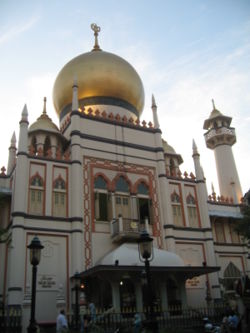 The Masjid Sultan (Sultan Mosque) in Singapore was built in 1824 and declared a national monument in 1973. The stunning building is very popular among visitors to Singapore as well as the local Malay community.

About 15% of Singapore's population are Muslims. A majority of Malays are Sunni Muslims. Other adherents include Indian and Pakistani communities as well as a small number of Chinese,Myanmar Muslims, Arabs and Eurasians.[1][2] 17 per cent of Muslims in Singapore are of Indian origin.[3] While the majority of Muslims in Singapore are traditionally Sunni Muslims who follow the Shafi'i school of thought, there are also Muslims who follow the Hanafi school of thought as well as Shi'ite Muslims.

In 1963, Singapore became part of Malaysia. Singapore separated from Malaysia and declared independence in 1965. The constitution of the independent republic included two provisions relating to the special position of the Malays and the Muslim religion i.e. Articles 152 and 153.

(1) It shall be the responsibility of the Government constantly to care for the interests of the racial and religious minorities in Singapore.

(2) The Government shall exercise its functions in such manner as to recognise the special position of the Malays, who are the indigenous people of Singapore, and accordingly it shall be the responsibility of the Government to protect, safeguard, support, foster and promote their political, educational, religious, economic, social and cultural interests and the Malay language.

The Legislature shall by law make provision for regulating Muslim religious affairs and for constituting a Council to advise the President in matters relating to the Muslim religion.

In 1966, Parliament passed the Administration of the Muslim Law Act (AMLA). The Act came into effect in 1968 and defined the powers and jurisdiction of three key Muslim institutions: (i) the Islamic Religious Council of Singapore, (ii) the Syariah Court, and (iii) the Registry of Muslim Marriages.

The Islamic Religious Council of Singapore or Majlis Ugama Islam Singapura(Muis) is a statutory board which plays an important role in the administration of Muslim affairs.

Section 3 (2) of the Administration of Muslim Law Act (AMLA) states that:

It shall be the function and duty of the Majlis —

(a) to advise the President of Singapore in matters relating to the Muslim religion in Singapore;

(c) to administer all Muslim endowments and funds vested in it under any written law or trust;

(d) to administer the collection of zakat and fitrah and other charitable contributions for the support and promotion of the Muslim religion or for the benefit of Muslims in accordance with this Act;

(e) to administer all mosques and Muslim religious schools in Singapore; and

(f) to carry out such other functions and duties as are conferred upon the Majlis by or under this Act or any other written law.

Section 7(1) of AMLA lists the membership of the Majlis. It states:

The Majlis shall consist of —

(a) a President to be appointed by the President of Singapore;

(b) a Vice-President, if one has been so appointed under subsection (6);

(d) not more than 7 members to be appointed by the President of Singapore on the recommendation of the Minister; and

The Secretary of Muis also attend the meetings of Majlis but does not have the right to vote under section 8(1) of AMLA. The duties and powers of the Secretary is delineated in section 20 of AMLA. It states:

Subject to such directions as may be given to him by the President, the Secretary shall —

(a) have charge of all correspondence and documents of the Majlis, including all books of account thereof and all title deeds and securities;

(b) be generally responsible for the proper collection of, accounting for and disposal of all funds of the Majlis; and

(c) in all other respects carry out such duties as may be imposed upon him by this Act or allotted to him by direction of the President.

Apart from the President and Secretary of Muis, another important office is that of the Mufti. Under section 30(3), the "Mufti shall be ex-officio a member of the Majlis."

Section 30(1) authorises the President of Singapore to appoint a fit and proper person to be the Mufti after consultation with the Majlis. In 1967, Mohamed Sanusi Mahmood was appointed as Singapore's first Mufti. He was succeeded by Syed Isa Semait in 1972.

(1) There shall be a Legal Committee of the Majlis, consisting of —

(b) 2 other fit and proper members of the Majlis; and

(c) not more than 2 other fit and proper Muslims who are not members of the Majlis.

(2) The members of the Legal Committee, other than the Mufti, shall be appointed by the President of Singapore on the advice of the Majlis for such period as he thinks fit.

(3) A notification of every such appointment shall be published in the Gazette.

(4) The Mufti shall be chairman of the Legal Committee.

Under section 33, the Legal Committee is authorised to follow the tenets of the Shafi'i school of thought. It states:

(1) Subject to this section, the Majlis and the Legal Committee in issuing any ruling shall ordinarily follow the tenets of the Shafi’i school of law.

(2) If the Majlis or the Legal Committee considers that the following of the tenets of the Shafi"i school of law will be opposed to the public interest, the Majlis may follow the tenets of any of the other accepted schools of Muslim law as may be considered appropriate, but in any such ruling the provisions and principles to be followed shall be set out in full detail and with all necessary explanations.

In 1880, the British colonial authorities introduced the Mahomedan Marriage Ordinance which officially recognised the status of Muslim personal law in Singapore.

In 1958, pursuant to the 1957 Muslim Ordinance, a Syariah Court with jurisdiction to hear and determine disputes pertaining to Muslim marriages and divorce cases was established.

The Court replaced a set of government-licensed but otherwise unsupervised qadhi (Muslim judges) who had previously decided on questions of divorce and inheritance, following either the traditions of particular ethnic groups or their own interpretations of Muslim law.

Today, the Syariah Court continues to exist as a court of competent jurisdiction with power and jurisdiction to hear and determine disputes defined by AMLA.

The ROMM registers marriages when the couple are both Muslims. In the case of mixed-religion marriages, the marriage is registered at the Registry of Marriages.

Previously, the registration of Muslim marriages as well as divorces were conducted under one unit, which is the Syariah Court.

It was first located in a bungalow at Fort Canning and later moved to Canning Rise in 1983.

Appeals on decisions of the Syariah Court and the ROMM are heard and determined by the Appeal Board.

Unlike Muis, the Syariah Court and ROMM are not statutory boards but constitute a part of MCYS.

In Singapore, the history of the Twelver Shi'ites began with the immigration of the Khoja community from India. A member of Khoja community spearheaded the founding of the Jaafari Muslim Association.

During the 1980s, Malays from the Muslim Youth Assembly (Himpunan Belia Islam) joined the Shi'ite community. A centre known as Hussainiyah Azzahra was later established.

The Jaafari Muslim Association and Muslim Youth Assembly cater to the Twelver Shi'ites.

The spiritual leader (Da'i al-Mutlaq) of the Dawoodi Bohras is Mohammed Burhanuddin, who represents the twenty-first imam. The Anjuman-E-Burhani caters to the Dawoodi Bohra community in Singapore. Bohra traders started settling in Singapore in the 1820s. The mosque for the Bohra community is the Burhani Mosque which was established in 1829. It has since been rebuilt and is now an 11-storey complex comprising prayer halls, function halls, meeting rooms and offices.

The Ismailis are followers of Aga Khan. The Aga Khan has decided to establish an Ismaili Centre and regional representative office of the Aga Khan Development Network in Singapore.[4]

There is also a significant proportion of the Sunni Hanafi Muslims in Singapore. Generally most [Muslim from Myanmar and Pakistanis in Singapore] are Hanafi. While they often inter-mix with the Malay who follow the Shafi'i madhab, Indian mosques in Singapore such as Angullia Mosque cater for the needs of the Hanafi Muslim in Singapore.