This is the list of regencies and cities of Indonesia, one step lower hierarchy of the Indonesia administrative division below the provincial government (sometimes it was called "the second level region").[1]

In Indonesia, both Regency and City are the same administration level, having their own local government and legislative body. The difference between a Regency and a City lies in demography, size and economy. Generally, a regency comprises a rural, larger area than a city. A city usually has non-agricultural economic activities.

A regency (Indonesian: kabupaten) is headed by a regent (bupati), while a city is headed by a mayor (walikota). All regents, mayors and member of representatives are directly elected for five years term. However, in Jakarta Special Capital Region, mayors and regents are chosen by the Governor. Each regency or city is divided further into sub-districts.

The list below groups regencies and cities in Indonesia by provinces. Note that each regency has a capital city (the regency seat).[2] 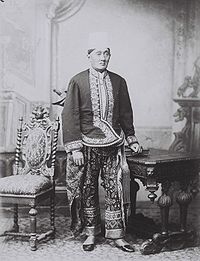 Portrait of a Javanese regent in gala uniform (circa 1900)

A regency (Indonesian: kabupaten) is a political subdivision of a province in Indonesia. The Indonesian term kabupaten is also sometimes translated as "district" or "municipality". Regencies are divided into Subdistricts (Kecamatan).

The English name "regency" comes from the Dutch colonial period, when regencies were ruled by bupati (or regents) and were known as regentschap (kabupaten in Javanese and subsequently Indonesian). Bupati had been regional lords under the pre-colonial monarchies of Java. When the Dutch abolished or curtailed those monarchies, the bupati were left as the most senior indigenous authority. They were not strictly speaking "native rulers" because the Dutch claimed full sovereignty over their territory, but in practice they had many of the attributes of petty kings (including elaborate regalia and palaces, and a high degree of impunity).

Regencies in Java territorial units were grouped together into Residencies headed by exclusively European Residents. This term hinted that the Residents had a quasi-diplomatic status in relation to the bupati (and indeed they had such a relationship with the native rulers who continued to prevail in much of Indonesia outside Java), but in practice the bupati had to follow Dutch instructions on any matter of concern to the colonial authorities.

The relationship between those sides was ambivalent: while legal and military power rested with the Dutch government (or, for a long time, with the VOC, the Dutch equivalent of the British HEIC) under a Governor General in Batavia on Java, the regents held higher protocollary rank than the white officials who supposedly advised them and held day-to-day sway over the population. After the independence of Indonesia in 1945, the terms bupati and kabupaten were applied throughout the archipelago to the administrative unit below the residency (karesidenan).

In recent years following Reformation, there has been a remarkable proliferation of district governments in Indonesia. This process has become known as pemekaran (proliferation or blossomming). Following the surge of support for decentralisation across Indonesia which occurred following the end of the Soeharto era in 1998, key new decentralisation laws were passed in 1999. Subsequently, there was a jump in the number of districts from around 300 at the end of 1998 to over 490 in 1998 ten years later. This proliferation of new districts, welcome at first, has become increasingly controversial within Indonesia because the administrative fragmentation has proved costly and has not brought the hoped-for benefits.

Within the senior levels of the administration there a general agreement that the process of pemekaran now needs to be slowed down (or even stopped for the time being) but there continues to be strong populist support from local politicians at various levels across government in Indonesia for the continued creation of new districts.[3]