For the Filipino illustrator and painter, see Malang (painter). 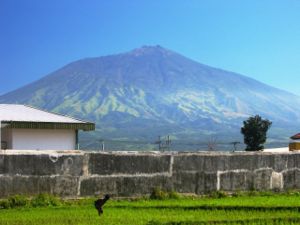 Malang is the second largest city in East Java province, Indonesia. It has an ancient history dating back to the Mataram Kingdom. The city population at the 2010 Census was 819,708. During the period of Dutch colonization, it was a popular destination for European residents. The city is famous for its cool air and the surrounding country regions of Tumpang, Batu, Singosari, and Turen. People in East Java sometimes call it "Paris of East Java." Malang was spared many of the effects of the Asian financial crisis, and since that time it has been marked by steady economic and population growth.

The name of Malang is taken from a temple namely Malang Kucecwara. The name of the temple is now applied to the motto of Malang. Malang Kucecwara literally means God has destroyed the false and enforced the right. Location of the temple is supposesedly located near modern Malang. "Malang" is Javanese word for "menghalangi (Indonesian)" or impeded (English). That word comes from the traditional historical stories that people of Malang fought bravely against the invaders from the Mataram Sultane .

Hundreds, even thousands of years ago before Malang became the second biggest city in East Java, Malang used to be the centre of government of the Kanjuruhan and Singhasari Kingdom. In the following era, Malang regency became an important place when the government of Mataram Kingdom took hold of the area, making it the largest regency in East Java and since then the development of Malang regency has increased well.

The city was incorporated into Mataram in 1614, then transferred to Dutch colonial rule. Malang was transformed under the Dutch; its cool climate which results from its elevation, along with its proximity to the major port of Surabaya, made it a popular destination for Dutch and other Europeans. In 1879, Malang was connected to Java's railroad network, further increasing development and leading to increased industrialization.

Along with growth came urbanization. The government could not satisfy the population’s needs for affordable housing, which lead to the building of shanty towns along the rivers and rail tracks. Up until today, the shanty towns still exist; although some have been transformed into “better” housing.

Malang has a total area of 252.136 km2. It shares its borders with Pasuruan Regency (North), Lumajang Regency (East), and Batu City (West). Mount Bromo, one of Java's largest volcanoes and a major tourist attraction, is located just to the east of the city. Malang is served by the Abdul Rachman Saleh Airport, a domestic airport with flights to Jakarta.

Malang is divided into five subdistricts:

Like most of Java, a large majority of Malang residents are Muslim; there are small minorities of Catholics, Hindus, and Buddhists. Many buildings of worship still stand from their construction in the colonial era. For example, City of Malang Grand Mosque or Masjid Agung Kota Malang in Malang City Square or Alun-alun kota Malang; Church of the Sacred Heart of Jesus (Gereja Hati Kudus Yesus) in Kayutangan; Saint Mary from Mount Carmel Cathedral (Gereja Ijen or Katedral Santa Maria dari Gunung Karmel) in Ijen Street, which is the seat for the Roman Catholic Diocese of Malang; the Immanuel Church in Alun-alun; and Eng An Kiong Buddhist Temple in JL. Laksamana Martadinata No 1 Malang. Malang is also famous for being the centre of religious education, this is evident with the existence of many Islamic schools (pesantren) and bible seminars.

Javanese is the day-to-day language used by Malang people. Many of the native Malang youths adopt a dialect that is called 'boso walikan', it is simply done by reversing the pronunciation of the words, an example of this is by pronouncing “Malang” as “Ngalam” instead. Like Surabaya, Malang residents adopt an egalitarian form of Javanese. As it becomes the educational city, there are many languages from outside Java spoken in Malang.

As a centre of tourism, Malang has various places of interest which can be classified into local, regional, national and international standards, including traditional dance performances such as Tari Topeng (Mask Dance), Jaran Pegon, Tari Beskalan (Beskalan Dance), etc. There are also 'Topeng' or Mask handicraft at the villages of Jabung and Kedungmonggo which have become a familiar landmark in Malang Regency.

Temporary residents to Malang are mostly for educational reasons. They come from other islands especially from East of Indonesia, which includes Bali, Nusa Tenggara, East Timor, Papua, Maluku, Sulawesi and Kalimantan.

Malang is located in Indonesian National Route 23, which connects it to Gempol and Kepanjen. Malang has a large intercity bus terminal, Arjosari, located in northern Malang. The primary means of public transportation is by minibus, called angkot (from angkutan=transportation and kota=city). They serve certain routes throughout the city, operated privately and cheap, but these city shuttles are not usually known for being comfortable. 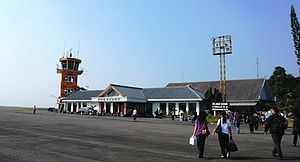 Malang is served by Abdul Rachman Saleh Airport, located in the outskirts of Malang. This airport can be accessed by taxis and travels.

On 28 May 2006, a blow-out occurred during a drilling for an exploration of Natural Gas. The blow-out initially produced 5000 m³ of mud flow per day. 18 months after the incident, the mud flow is estimated to be 80,000 m³ to 100,000 m³ per day. This ongoing mud flow has forced the closure of the Porong-Gempol toll road in East Java, which effectively cut off the transport line from Surabaya to Malang.[2]