Medan (Indonesian: Kota Medan; pronounced [meˈdan]) is the capital of the North Sumatra province in Indonesia. Located on the northern coast, Medan is the fourth largest city in Indonesia (behind Jakarta, Surabaya, and Bandung), and the largest Indonesian city outside Java. The city is bordered by the Deli Serdang Regency to the east, south and west, and the Strait of Malacca to the north. It is close to the volcano Sinabung, which erupted in August 2010 after a 400 year dormant state.

From 2005 Medan was governed by a mayor, Dr. H. Abdillah Ak, MBA (appointed for the period 2005-2010). However, Abdillah and his vice mayor were caught by Indonesian Corruption Eradication Commission in 2008. Syamsul Arifin, the Governor of North Sumatra Province, then appointed Affifudin Lubis to become the acting mayor. In 2009, Affifudin Lubis resigned as mayor, and the Governor then appointed Rahudman Harahap to become the mayor. Because Rahudman wanted to be a candidate in the 2010 mayor election, he resigned as mayor. Then Syamsul Arifin became the acting mayor. In the 2010 mayor election, Rahudman Harahap is elected mayor. Medan is divided into 21 districts (kecamatan) and 151 subdistricts (kelurahan). 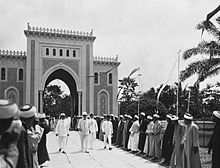 Based on the diary of the Portuguese merchant in early 16th century, it stated that the name of Medan was actually derived from Medina which is actually a holy city in the western of Saudi Arabia. However, other sources indicated that the name of Medan actually came from Indian Hindi language word "Maidan" meaning "ground" or "land"(like in Pragati Maidan in Delhi). One of the Karo-Indonesia dictionary written by Darwin Prinst SH published in 2002 wrote that Medan could also be defined as "recover" or "be better".

The first inhabitants of Medan came from the Malays from the Malay Peninsular and the Bataks from Karo Highlands. It was not until the Sultan of Aceh, Sultan Iskandar Muda, sent his warlord, Gocah Pahlawan Laksamana Khoja Bintan, to be the Sultanate of Aceh's representative in Tanah Deli, that the Sultanate of Deli started to grow. This growth stimulated growth in both the population and culture of Medan. In the second year reign of Sultan Deli (between 1669–1698), there was a cavalry battle in Medan.

Medan did not experience significant development until the 1860s, when the Dutch colonialists began clearing the land for tobacco plantations. Medan quickly became a center of government and commercial activity, dominating development of Indonesia's western region.

The Dutch governed Tanah Deli from 1658, after Sultan Ismail, ruler of the Kingdom of Siak Sri Indrapura, yielded some of his once-ruled land, Deli, Langkat, and Serdang. In 1915 Medan officially became the capital of North Sumatra Province, and officially a city in 1918.

Currently much of Medans historic architecture from the colonial era is rapidly being demolished to make way for modern buildings (malls, garages, etc.).[1]

The city is Indonesia's fourth most populous after Jakarta, Surabaya, and Bandung, and Indonesia's largest city outside of Java island. Much of the population lies outside its city limits, especially in Deli Serdang.

The city has diverse communities, reflecting its history. However, The Mandailings also live here in big numbers and working at the most strategic government position. In addition, there is a large ethnic Javanese community, largely made up of the descendants of people transported from Java in the last century to be employed as contract workers at various plantations in North Sumatra. They are usually known as Jadel (Jawa Deli/Deli Javanese) or Jakon (Jawa Kontrak/Contract Javanese), and, with other Javanese communities in Sumatra, Pujakesuma (Putra Jawa Kelahiran Sumatera/Sumatra-born Javanese). Their presence in Medan can be marked from various Javanese toponymies in Medan, such as Harjosari, Sarirejo, Sidodadi, Sidomulyo, Sidorame, Sidorejo, Sitirejo, Sudirejo, Tanjungrejo, Tanjungsari, Tegalrejo, Tegalsari, etc.

A highly visible component of Medan's population is the large number of Chinese, who are very active in the business sector, and unlike the ethnic Chinese in many other parts of Indonesia, they continue to speak Hokkien. The city also host a sizable community of Tamil descendants who are commonly known as keling. A well-known Tamil neighbourhood is Kampung Keling. In addition to Indonesian, Malay, Mandailing, Minangkabau, Karo, Javanese, Hokkien, Tamil, Aceh, and English are spoken.

Under the Koppen climate classification, Medan features a tropical rainforest climate with no real dry season. Medan does have noticeably wetter and drier months, with its driest month (February) on average seeing about one third of the precipitation of its wettest month (October). Temperatures in the city average approximately 27 degrees Celsius throughout the course of the year. Annual precipitation in the Medan is around 1800 mm. 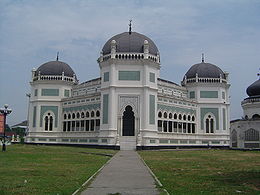 There are many old buildings in Medan that still retain their Dutch architecture. These include the old City Hall, the central Post Office, the Tirtanadi Water Tower, which is Medan City's icon, and Titi Gantung (a bridge over the railway).

There are several historic places such as Maimun Palace (Istana Maimun) built in years 1887–1891, where the Sultan of Deli still lives (the Sultan no longer holds any official power), and the Great Mosque (Masjid Raya) of Medan built in 1906 in the Moroccan style by the Dutch architect Dingemans.[3]

Since 2005, a catholic temple, in Indo-Mogul style, devoted to Graha Maria Annai Velangkanni (Our Lady of Good Health), is built in Medan. This particular Saint knows its origin with an apparition in the 17th century in India. The temple is an important building, of two stories and a small tower of seven storeys in Indonesian style, that already attracts attention from the main road (it is situated in the small road Jl. Sakura III besides Jl. Simatupang). It is already the second most important pilgrimage place in Asia.

One of the unique features of Medan are the motorized becaks that are found almost everywhere. Unlike traditional becaks, a motorized becak can take its passenger anywhere in the city. The fare of riding a 'becak' is relatively cheap and is usually negotiated beforehand.

There are also more common transport like taxis and minibuses, known as sudako.

Railroad tracks connect Medan to Binjai and Tanjungpura to the northwest, to port of Belawan to the north, to Tebing Tinggi and Pematang Siantar to the southeast, and also Rantau Prapat among other city. The largest train station in Medan is Medan Station. There are also smaller stations in Medan, such as Medan Pasar, Pulu Brayan, Titi Papan, and Labuhan, and Belawan. Titi Papan and Pulu Brayan only serve as the stop for freight trains carrying oil palm and petroleum.

A toll highway connects Medan to Belawan and Tanjungmorawa. A plan for the extension of this highway to Tebing Tinggi and to Binjai has been completed, and the central government is currently seeking investors to build the extension.