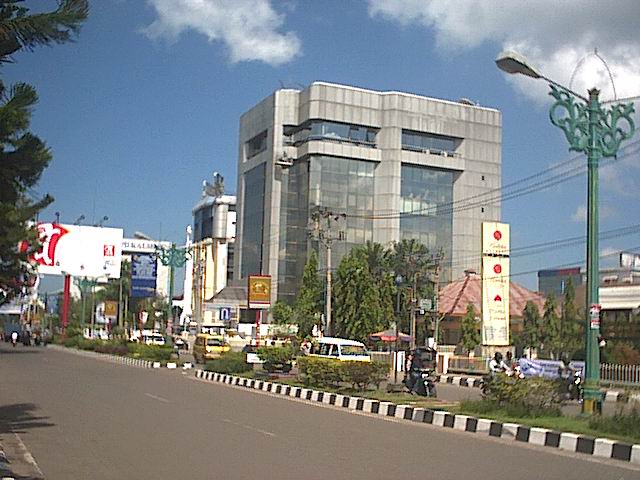 Banjarmasin is the capital of , . It is located at coord|3|20|S|114|35|E|, on a delta island near the junction of the Barito and Martapura rivers. As a result, Banjarmasin is sometimes called the "River City". Its population is about 444,000 (As of|1991).Banjarmasin is served by the , which is located about 25 km outside the town. The town is also served by a port, named . A fairly important deepwater port, Pelabuhan Trisakti Banjarmasin is the trade center of the Barito basin; exports include , pepper, , , , , and s. Passenger ships and ferries to and from Java also carry their operation here.

The city is laced with flood-prone waterways, and many houses are built on rafts or stilts over the water. Many of such waterways are also used for travel, using relatively small rowboats (only major rivers are accessible by larger speedboats, tugboats, longboats, and barges).

The city is the home of the .

was an ancient kingdom in South Kalimantan, but soon it was replaced by kingdom of . In the fourteenth century, Banjarmasin was part of the Hindu kingdom of and respectfully, a vessel of . But Pangeran Samudera converted to become a Muslimin the fifteenth century, and Banjarese people became muslims ever since. The Dutch opened trade there in 1606. The British controlled the city for several brief periods, and in 1787 it became a Dutch protectorate.

The is the chronicle of Banjarmasin. This text, also called the History of Lambung Mangkurat, contains the history of the kings of Banjar and of Kota Waringin in South-east and South Borneo respectively.

The , located along the Martapura riverfront, is a major landmark in the city. Built in 1980, the mosque could accommodate thousands of worshippers on Friday prayers. A state university (, UNLAM) is also located in the town.

Banjarmasin has long been renowned as a center for gem trading, particularly rare diamonds and ruby's. An informal network with international connections exists, which also supports the large domestic Indonesian trade in rare diamonds. Banjar's diamonds are especially known for their exquisite brilliance. In recent times, however, many of Indonesia's large diamond stones have been traded out of the country.

A floating , where buyers and sellers visit by boat, is located on the western outskirts of town. It is one of the two such marketplace in Southeast Asia, the other one located in .