Manado (pronounced [məˈnado]) is the capital of the North Sulawesi province of Indonesia. Manado is located at the Bay of Manado,[1] and is surrounded by a mountainous area. The city has about 405,715 inhabitants,[2] making it the second-largest city in Sulawesi after Makassar. The municipality of Manado is divided into nine districts: Malalayang, Sario, Wanea, Tikala, Wenang, Mapanget, Singkil, Tuminting and Bunaken.

The name Manado comes from manadou or wanazou meaning "on the far coast" or "in the distance," and originally referred to the further of two islands which can be seen from the mainland. When the settlement on this island was relocated to the mainland, the name Manado was brought with it, after which the island itself became referred to as Manado Tua (that is, "Old Manado").[3]

The first mention of Manado comes from a world map by cartographer Nicolas Desliens, where it showed the island Manarow (today's Manado Tua). Before Europeans arrived to North Sulawesi the area was under the rule of the Sultan of Ternate, who exacted tribute and introduced the Muslim religion among some of its inhabitants. The Portuguese made the Sultan their vassal, taking possession of the Minahasa and established a factory in Wenang.

Meanwhile, the Spanish had already set themselves up in the Philippines and Minahasa was used to plant coffee that came from South America because of its rich soil. Manado was further developed by Spain to become the center of commerce for the Chinese traders who traded the coffee in China. With the help of native allies the Spanish took over the Portuguese fortress in Amurang in the 1550s, and Spanish settlers also established a fort at Manado, so that eventually Spain controlled all of the Minahasa. It was in Manado where one of the first Indo-Eurasian (Mestizo) communities in the archipelago developed during the 16th century.[4] The first King of Manado (1630) named Muntu Untu was in fact the son of a Spanish Mestizo.[5] 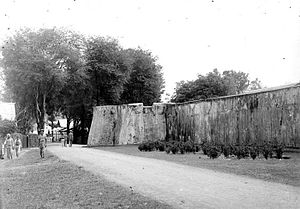 Fort Nieuw Amsterdam in the 1920s

The Dutch East India Company or Verenigde Oost Indische Compagnie (VOC) built a fortress in Manado named Fort Amsterdam in 1658. As with regions in eastern Indonesia, Manado has undergone Christianization by Dutch missionaries, including Riedel and John Gottlieb Schwarz. And the Dutch missionaries built the first Christian church in Manado called Oude Kerk (Old church) and it is still stand now and now it is called Gereja Sentrum. The Javanese prince Diponegoro was exiled to Manado by the Dutch government in 1830 for leading a war of rebellion against the Dutch. The English biologist Alfred Wallace visited Manado in 1859, and praised the town for its beauty.

In 1919, the Apostolic Prefecture of Celebes was established in the city. In 1961, it was promoted as the Diocese of Manado.

The Japanese captured Manado in the Battle of Manado in January 1942.[7] The city was heavily damaged by Allied bombing during World War II.

In 1958, the headquarters of the rebel movement Permesta was moved to Manado. When Permesta confronted the central government with demands for political, economic and regional reform, Jakarta responded by bombing the city in February 1958, and then invading in June 1958.

Tourism and Places of interest 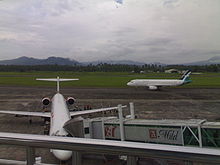 Manado is also home to some of the biggest and most influential churches in the province, with many of them located along the iconic Sam Ratulangi Street.[8] Ecotourism is the biggest attraction in Manado.

Scuba diving and snorkelling on the nearby Bunaken National Park, including the island of Bunaken are popular attractions.[9][10][11]

Ban Hin Kiong Temple is another tourism spot in the city, especially during the Chinese new year celebration. Souvenirs shops are located on B.W. Lapian street.

Citraland, a wealthy suburb of Manado, is home to Asia's 2nd tallest and the world's 4th tallest statue of Christ (Christ Blessing Statue), and perhaps the world's first statue in the flying posture.[13]

Wakeke Street, somewhere on the middle of the town, was resolved by the local government as culinary tourism area for tinutuan or bubur manado, that is manadonese porridge.[14]Indonesia's only active synagogue is in Manado.[15]

Manado Boulevard Carnaval (MBC) is a Fashion Carnaval at every July 16 inline with Manado City Birthday.[16]

Manado features a tropical rainforest climate under the Koppen climate classification. The city averages roughly 2850 mm of rain annually. Manado has a noticeably wetter season that spans from November through June and a drier season that covers the remaining four months. However, Manado does not have a true dry season where monthly precipitation figures falls below 60 mm. As with many other cities with this climate, average temperatures remain constant throughout the year, with average high temperatures at around 30 degrees Celsius and average low temperatures at around 24 degrees Celsius.

The local language spoken in Manado and the surrounding area is a creole of the Malay language called Manado Malay.