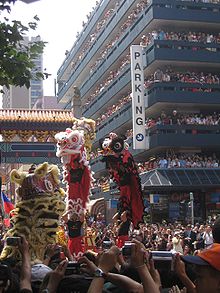 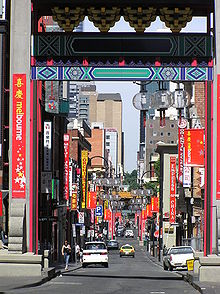 Melbourne's Chinatown was established during the Victorian gold rush in 1851 when Chinese prospectors joined the rush in search of gold. It is notable as the oldest Chinatown in Australia,[1] the oldest continuous Chinese settlement in Australia, and the second longest continuous Chinese settlement in the western world, only because San Francisco's Chinatown was nearly, but not completely destroyed by the 1906 earthquake.[2]

In 2010, the ground floor of the Chinese Museum was remodeled as a visitor centre for Melbourne's Chinatown.[3]

Other than the original Chinatown in the CBD, several newer Chinese communities are found in the suburbs of Melbourne, such as Box Hill (Carrington Road). Immigrants from Hong Kong have established there. Centro Box Hill is the primary shopping destination in Box Hill as there are many shops focused on Asian products and service.

Similar Vietnamese communities can be found in Richmond (Victoria Street), Springvale and Footscray. These areas have businesses owned by some ethnic Chinese from Vietnam, with most run by ethnic Vietnamese, and include associations as well as a range of grocers, shops and eateries offering Chinese and Vietnamese food and merchandise.