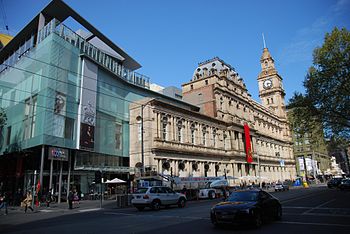 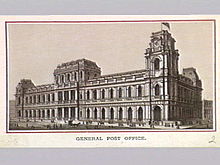 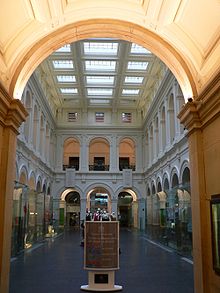 Inside the sorting hall after conversion into upmarket shopping arcade

The Melbourne General Post Office (also known as Melbourne's GPO or simply GPO), is a former post office in Melbourne, Victoria, Australia. Located on the corner of Elizabeth Street and Bourke Street in the heart of the Melbourne CBD it is a landmark of the city and is listed on the Victorian Heritage Register.[1]

The former purpose built post office building currently functions as a shopping mall, having been redeveloped for adaptive reuse in 2004.

The location of it remains important as it is still officially used as a measure of distances from the centre of Melbourne.

The first General Post Office was declared in 13 April 1837, shortly after the naming of Melbourne.[2]

The foundation stone was laid on its present site in 1859 and built to the design of A.E.Johnson in the Renaissance Revival style. The building was later extended in 1887 with a larger clock tower, extra storeys and applied with a Second Empire styled mansard roofline. Plans for the building were never completed.

The interior sorting hall was redesigned between 1907 and 1919.

In 2001, the GPO ceased to function as an office of Australia Post. A planning application for an upmarket shopping mall was approved.

A hotel development with thirteen-storey hotel was proposed, but never eventuated.

The hall was gutted by fire in 2001. The building was restored as a retail centre in 2004. Plans to complete the building were shelved in favour of a modern extension on the northern side.

The building now forms a major arcade running from Bourke Street through to Little Bourke Street. It opened for business as a new upmarket retail centre in 2005. 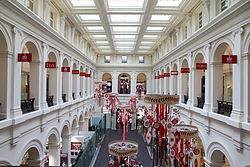